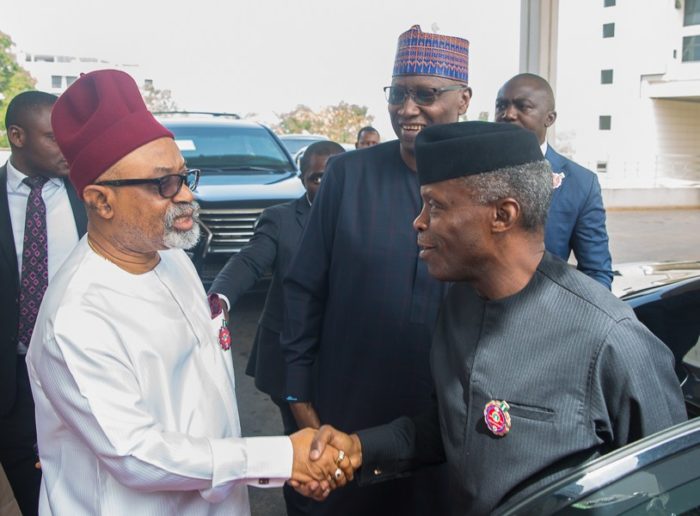 For now the game looks truly like a storm in a tea cup. I am of course referring to the political storm generated by Vice-President Yemi Osinbajo at the weekend when he asked his Yoruba ethnic group to vote massively for President Muhammadu Buhari in 2019 presidential election.

He believed that it was the only sensible thing to do not merely because he is Buhari’s deputy, and also his running mate in that election, but because winning the election would guarantee the Yoruba the presidency in 2023.

The existing rotational political formula, though not made constitutional, paves the way for the presidency to return to the South after Buhari’s two-term in office. In 2023, the office would be up for grabs by two power blocs in the South, the Yoruba ethnic group and its traditional political rival, the Ndigbo coming from the only zone in the South that has not tasted political power at the level of the presidency since the return to democratic system of government.

By laying claim to this slot in 2023, Professor Osinbajo was merely adding the heavy weight of his office to the kite flown earlier by President Buhari’s Triple Minister Babatunde Raji Fashola. He it was who opened the can of worms by telling the Yoruba to vote well if they wanted to get back to the presidency which was vacated by fellow tribesman, President Olusegun Obasanjo in 2007. Somehow, the whirlwind he sowed didn’t quite translate into the kind of storm generated by the vice-president.

During his door-to door campaign in Oyo State, Professor Osinbajo told the Alafin of Oyo, Oba Lamidi Adeyemi, arguably the most politically sophisticated Yoruba traditional ruler, that “the Yoruba have a lot to contribute to Nigeria for the 2019 elections. It is for us Yoruba, if you understand, it is for us.”

To draw the point home sufficiently, the professor of law, not known for  indulging in vagueness or non sequiturs especially when engaged in legal or political rhetoric, told the Alafin point blank that “we are not looking at 2019 but 2023. If we don’t get it now, it may take some time again.” Meaning that if they, the Yoruba group, don’t make sure President Buhari is re-elected in February, someone else will get to power and the legitimate aspiration of the Yoruba to produce Buhari’s successor in 2023 would be kept in abeyance.

This legitimate aspiration – dressed up as a vote-catching gimmick – not unexpectedly, attracted a sharp backlash. Afenifere, the vocal pan-Yoruba socio political group, literally tongue lashed the VP. The fiery spokesman for the group, Yinka Odumakin, usually not known for half measures, wondered what the Yoruba had gained since the professor became vice-president, saying “all the things that are dear to the Yoruba, he opposed including restructuring.”

Instead of the presidency in 2023, what the Yoruba want, according to the group’s spokesman, speaking to The Punch, is the restructuring of the country by the means of true federalism. In case you still find it difficult to get his meaning, hear this: “we have had an eight year presidency. The Ijaw have had six years. The North has had more than everybody. But what is their lot? It’s poverty. We don’t want to stay under this arrangement. The arrangement we want is where we will have control over our affairs and for every citizen of Nigeria to develop at their own pace.”

But the Ndigbo, who have positioned themselves as the heir-apparent in 2023 and beyond, are not exactly interested in political polemics. Presidency is what they want. And presidency, precisely, is what they are fighting to get. Ohanaeze Ndigbo, the umbrella organisation under which they operate, equally and almost viciously, hit back at Professor Osinbajo for what looked to them like his unabashed political heresy.

In fact, the Ohanaeze Ndigbo believes that the Igbo ethnic nationality holds the key to Nigeria’s development. For the country to develop, therefore, says this oracular organisation, an Igbo man must become president. Not to do so, and to allow the Osinbajo dream for his people to come true, means that the country would continue to “wallow in abject socio-political, economic and developmental blindness.”

Ohanaeze Ndigbo spokeman, Uche Achi-Okpaga, apparently referring to the pastoral calling of the Vice-President, in his comments also in The Punch, confessed that he was “dumfounded that these are men that believe in the existence of God but, perhaps unwittingly, don’t believe in the God factor.” And in case they have forgotten, the Ndigbo, he explained, “are the descendants of King David, the man after God’s heart. Anything you do in Nigeria without the active co-operation and participation of the Igbo would always crumble as exemplified in the present administration of PMB. The Igbo are to Nigeria what Israel is to the world today.”

All these bricks and bats are parts and parcel of the power game. It’s about who gets what and when and not necessarily about how the country can be better governed and developed. Clearly it is also about politics of insincerity and deceit.

And this game of the three wise men promises to be more interesting if you call into play the political equation from 1960 when the country’s federal system, according to Ruth First, rested on a tripod of uneven length and fashioning. But with the unitary system of government imposed by the military from 1966 and which has remained the bedrock of our extant laws, Nigeria has ceased to be a federation. But the power blocs, the surviving features of the old regional arrangement, have continued to rest on a tripod of uneven length and fashioning.

This triangular axis of political influence remains in the hands of the true owners of the country, Nigeria’s three wise men. Every other claim to the contrary is deceitful insult which only the congenitally uninitiated among the minorities can fail to appreciate. From this perspective, it is therefore easy to see that Goodluck Jonathan’s presidency was a brief political aberration.

It is now welcome back to the game of the three wise men. The man who is currently in a position to give and take power, is believed to be sending his foot soldiers across the Niger selling the same product – the promise of 2023 – to the two political rivals.

The Secretary to the Government of the Federation, the urbane and politically sophisticated boss, who is calling the shots from the engine room of the Buhari presidency, the one and only Boss Mustapha, seems clearly to have taken charge of the Eastern flank. And truth be told, he is doing a great job of it – struggling desperately to be believed when he told the Igbo voters that it was their turn to produce the next president after President Buhari. He had said it in Uyo and he has repeated himself in Owerri.

Apparently there is no fear of credibility in the presidency for two powerful titans from the villa going out to market the same one and only product to two different blocs at the same time. It is for the East and the West to sort themselves out. But the arch-rivals, the Yoruba and the Igbo ethnic nationalities, all of them masters of the political game, can be trusted to read between the lines and tell which seeds of time will grow and which will wither away in the soil come the time of harvest.

For now, I say enjoy your Christmas and the rice and stew that go with it.