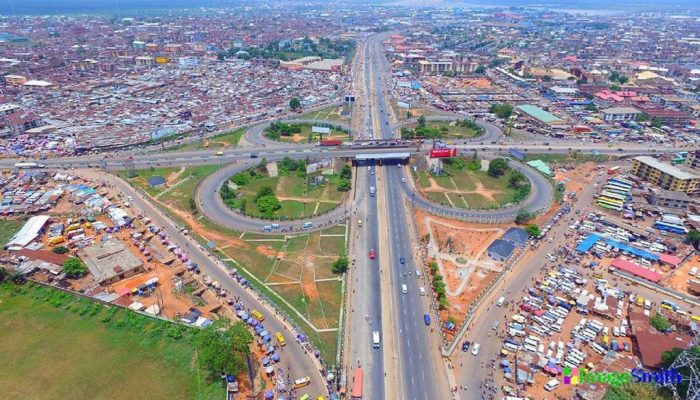 Before the 1966 pogrom against the Igbo and indigenes of the former Eastern Nigeria, Nnewi in Anambra State was under the shadow of Onitsha. The markets in Nnewi were like the typical Igbo markets that were in session every four days, depending on which name each market bore. The Nkwo Market, which was situated at the centre of the town, was in full session every Nkwo day, even though some isolated traders could sell some petty things, especially food items, on other days. Anybody who wanted to buy anything of substance went to Onitsha, some 20 kilometres away.

On religious matters, the Anglican Church and the Roman Catholic Church (the two big churches in Nnewi) had their diocesan headquarters in Onitsha. So, the bishops resided in Onitsha and were seen occasionally in Nnewi. To travel to any part of Nigeria from Nnewi, one had to get to Onitsha first. If the trip was to the North or West, one had to cross over by boat to Asaba (before the construction of the Niger Bridge in 1965). But after the bridge was constructed, Onitsha became the connecting city to other parts of Nigeria for most towns and villages in the current Anambra State.

On any map of Nigeria designed before the mid-1970s, Nnewi was usually omitted, because it led to nowhere and was not known for anything of note. The only thing of note that attracted people to Nnewi before the Nigerian Civil War was Okongwu Memorial Grammar School, Nnewi, which was founded in 1947 and had boys from distant towns and villages as students. The only other thing of note about Nnewi was that it produced some prominent individuals like Sir Louis Odumegwu Ojukwu, the richest man in Nigeria; Dr Nwafor Orizu, Senate President and acting President of Nigeria; Lt Col Emeka Odumegwu-Ojukwu, Governor of Eastern Nigeria and later Head of State of the short-lived Republic of Biafra; Chief Z.C. Obi, President of Igbo State Union, Rt Rev. L.M. Uzodike, the first Igbo bishop of the Diocese on the Niger, Onitsha (Anglican Communion). Interestingly, none of these personalities operated from Nnewi, because there was nothing of note – politically, commercially or religiously – that attracted people to Nnewi.

However, all that changed with the pogrom of 1966. When Nnewi sons and daughters fled home from different parts of Nigeria in 1966 and did not have a big market to continue with their trade, Lt Col Emeka Odumegwu-Ojukwu, as the Governor of Eastern Nigeria, asked the Igwe of Nnewi, Igwe K.O.N. Orizu (Orizu lll) to carve out a portion of the vast Edo forest for development. (Edo’s shrine is situated close to the centre of the town.) It was the strangest of requests.

Edo’s land covered about a kilometre radius. The land was so sacred and feared that while walking past the shrine of Edo, if your money fell from your pocket, you would fearfully leave the money there and run along. You dared not even remove a leaf from any tree or shrub that belonged to Edo.

But Igwe Orizu consulted human beings and deities and they all gave the go-ahead. A portion of the land of Edo was cleared and turned into Nkwo Nnewi Market. That was how the transformation of Nnewi started, for even after the Nigeria-Biafra War, many Nnewi indigenes refused to go back to those parts of Nigeria where they lost all their investments and even their relatives. They decided that Nnewi was good enough and viable enough for them to engage in that motor and motorcycle spare parts trade that they were doing in different parts of the country. That decision eventually turned Nnewi into a place that attracted people from across Africa and other parts of the world for business transactions.

After the Civil War, Nnewi owners of transport companies, led by Chief Augustine Ilodibe, founder of Ekene Dili Chukwu Nigeria Limited, decided to have direct trips to and from Nnewi. That further helped to make access to Nnewi easier. By the 1980s, some of the big importers of auto spare parts decided to go into manufacturing. They also decided to site their companies in Nnewi despite the poor infrastructure like electricity, telecommunications, and roads.

When he was elected Chairman of Nnewi LGA in December 1987, Dr D.B.A. Ofomata (with Maazi E.C. Egwudo as the arrowhead) decided to expand the Nnewi market. So they went again to Edo’s land and carved out a large portion that was turned into the new market named Agbo-Edo Market. (Agbo Edo means the forest of Edo). That made the Nnewi markets to have sections: Motor Spare Parts section, Motorcycle Spare Parts section, Articles section, Building Materials section, Electrical and Electronics section, Banking section, Fresh Fruits and Foods section, and a garage within the market. The banks rushed in. All these combined to boost the development of Nnewi as a commercial-cum-industrial city of note in Nigeria.

While the Agbo-Edo Market was being constructed in the late 1980s, something unique was done to prevent fire incident. Having seen the frequency of fire incidents in markets in Onitsha, Aba, Lagos, Kano, Port Harcourt, etc, the planners of the Nnewi markets ensured that no wood or flammable material was used in the construction of the shops. Concrete decking was used for roofing throughout the new Agbo-Edo Market and the reconstructed Nkwo Nnewi Market. So since the late 1980s, Nnewi markets have not experienced any devastating fire outbreak.

The Nnewi Market model was used in the construction of the Auto Spare Parts and Machinery Dealers Association (ASPMDA) Market in Trade Fair Complex, Lagos, because those behind the relocation of the market from Idumota to the International Trade Fair Complex, along Badagry Expressway, Lagos were mainly Nnewi people. Similarly, since February 14, 2000 when the ASPMDA relocated to the International Trade Fair Complex, there has not been any extensive fire incident. In such markets, when fire breaks out, it starts and ends in the affected shop – it does not spread to other shops. Surprisingly, many markets across Nigeria have not borrowed this model to stop repeated fire outbreaks.

Back to Edo and her land. Recently, the remaining little land left for Edo was finally collected and transformed into a mini-park for vehicles. Some shops were constructed round the park. In return, Edo got a small one-storey building with a satellite dish. So Edo can now watch CNN, Super Sports, Africa Magic and even Telemundo, while people are transacting businesses on her land!

Beyond the vision of Nnewi people to make their land great, the biggest force that helped that vision to come to reality was the lack of fear for any obstacle – including man and deity. Nnewi has a peculiar saying: “Oo mmadu sili Edo nya nwelu Nkwo (It was human beings that gave Edo the go-ahead to own the Nkwo market). The import is that if human beings decide that she will no longer own Nkwo, that will be the end of her ownership of the market and its land.

So, even though Nnewi people fear their deities, they also do not become slaves to the deities. They believe that although the deities are powerful and control the affairs of men, men can also manipulate the deities to make them conform to the needs of the community. Therefore, deities don’t exist to do whatever they want; they exist to protect the people and make their lives more meaningful.