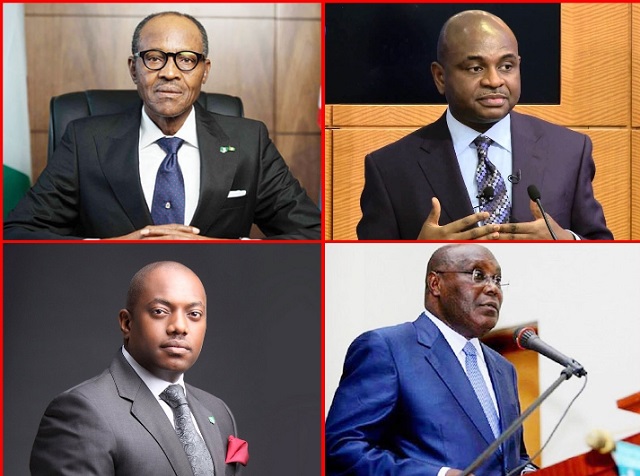 Unlike the gladiators of Rome, they are not in the arena to fight one another for public entertainment. For the avoidance of doubt, their mission is not to make the people happy and contented.

No. The Nigerian political gladiators, armed with beautiful documents that promise the people all the goods of this world, are here for serious business – they have entered the arena to fight for the big prize. The presidential candidates – about 70 of them – are fighting for gold: the presidency of Nigeria with a four-year tenancy or more in the Villa plus all the powers and the glory.

In 29 states of the federation, 821 candidates have also entered the arena seeking the fairly downsized equivalent of what the big masquerades are seeking in the Villa, the equally coveted seat of power in each of the Government Houses adorned with all the paraphernalia of pomp and power.

They too, for sure, are not out for merry-making. They are seeking to become their excellences, the governors. And they too will spare no efforts. If the past is anything to go by, they will throw into the fray all they can afford to throw in – dollars, naira and kobo even cudgels, guns and machetes.

People say casually that politics is a game. If it is so, this game can be bloody and ruthless. And that is why it is not for the faint hearted, or the congenital puritans seeking to please God and to play the game according to the rules. For most of them, it is not God’s business. It is the business of the marabouts, the babalawos and the itinerant false prophets, the clairvoyants who see all but see nothing.

Many of the gladiators cannot have forgotten the political dictum of the sage of Ota.  Once upon not a long time ago, this former military head of state who later became a prize winner with an eight-year uninterrupted tenancy in the Villa had prescribed a winnable formula: make the battle for the control of the plump prize a do –or –die affair. And so it came to pass that many a contestant after him indeed made it a do- or-die or in fact, a do-and-die affair with so much money, illegally or legally acquired, and so many innocent lives thrown into it.

The cries and the groans and the loud moans that you hear across the land since the last party primaries, according to the veterans of this game, arise from the millions of hard currency gone down the drain in the hopeless pursuit of a slim chance to be allowed into the arena for the contest.

But somebody has vowed that this time around, it will not be business as usual. That person is none other than President Muhammadu Buhari, who, desirous of moving his administration and his ambition to the Next Level has commenced that movement with the right step. He has pleaded with 69 other fellow contestants as well as other political gladiators not to do anything to set the country ablaze.

“I am not unmindful that the National Assembly and the presidential campaign starts today (Monday), I will (sic) implore candidates to go about the campaigns peacefully and decently. We have no other country, let us not set it ablaze because of politics and sectional interests,” declared the Commander- in- Chief of the Armed Forces who, as an incumbent, is presiding over his first general and presidential elections.

He has a lot of experience to draw from. As a leader, he has seen what an overvaulting ambition can do to a people and to a country. In Africa, electoral malfeasance including annulment of credible elections in Nigeria and Algeria for instance, had caused the deaths of thousands of persons in the 1990s. Kenya lost more than one thousand lives in 2008 when the electoral umpire refused to declare results of elections that were deemed to be free and fair. President Buhari was a candidate in the 2011 presidential elections which he lost. In the violence that followed, the official figure of the dead was put at 943 and the injured put at 838 persons.

We can understand his deep sense of patriotism when he declared that never again should Nigeria witness that kind of horror. He has commended his predecessor, President Goodluck Jonathan, on many occasions for the orderly conduct of the 2015 election which brought him to office. He said: “My predecessor President Goodluck Jonathan by his action in 2015 had already set the tone for decent political conduct in the country.”

Buhari is proud to acknowledge this conduct and to recommend it to other candidates and other politicians. Despite some flip flops in policy pronouncements and implementation and a clear inability or unwillingness to walk the talk on some crucial issues, a development capable of casting doubt on his administration’s credibility, President Buhari, as a person, must be given the benefit of the doubt.

If he says he will do all it takes to ensure peace and violence- free election, we must take his words for it. But he must not only keep his fanatical followers in check as he has enjoined other contestants to do but he must ensure that security officials, police in particular, must be scrupulously neutral and seen to be so in the election and throughout the campaign.

Nobody is under any illusion that impunity and complicity of government and security officials add disproportionate amount of fuel to election crisis. The electoral umpire does not have its own police and cannot police the electoral system beyond what security officials can do to ensure peace and orderliness. The Independent National Electoral Commission, INEC, cannot arrest disorderly persons at the polling stations. It is the duty of the police. Mercifully, the police have issued stern warning to its rank and file to behave well and conduct themselves decently and show transparent neutrality during the election to ensure a free and fair exercise.

If Nigeria survived the apocalypse that was forecast in the build-up to the 2015 general elections, it must show more determination to do so again and shame the prophets of doom. Preceding the 2015 elections, there was a nation-wide concern for post-election Nigeria. The international communities had predicted doomsday, the Nigerian Armageddon. In a clear and unmistakeable language, they had made a gloomy forecast that Nigeria would not remain a united country after the 2015 general elections.

But prominent senior citizens including General Abdulsalam Abubakar, the Head of State, who midwifed the birth of the Fourth Republic and Elder Statesman, Emeka Anyoku former Common Wealth Secretary General, rose stoutly to the occasion with admirable result. They initiated a peace accord and got all the major actors to sign an undertaking to maintain peace at all costs, no matter the outcome of the elections. It came to pass that no lives were lost and Nigeria did not go up in flames.

President Jonathan, may he live long, who had vowed that his ambition was not worth the life of any Nigerian, lived true to his pledge, despite numerous evil whisperings and temptations that climaxed in an Orubebe orchestrated drama at the collation centre of the presidential election.

Today, it is safe to say that Jonathan, once derided as a clueless political minnow, has become an example for decency and good conduct, an international icon and a worthy ambassador for peace. The least the current leaders can do is to emulate the Jonathan example.