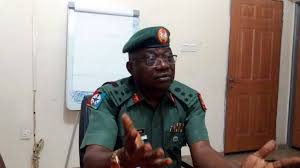 The Nigerian Army must have felt the criticism of their handling of the Shiites’ protest so keenly that they had to respond. Unfortunately, the best they could do was to hide behind the words of the US president, Donald Trump. On their official Twitter handle, they posted a video of Trump warning that American soldiers would shoot at illegal migrants at the US border if they threw rocks at the US soldiers. Trump said they would consider rocks as lethal as firearms and respond with corresponding violence.

Now, anyone who has been paying attention to the US politics would have known two things: one, that Trump is a blowhard with limited knowledge of how anything works. When he speaks off the cuff like that, he will either walk back from it or his aides will deny it on his behalf. Two, even if Trump meant that threat, American soldiers are trained to know better than obey an order that does not match the acceptable terms of military vs. civilian terms of engagement. When their military was summoned to intervene in the Black Lives Matter protests in some US cities, they faced a mob that threw stones at them but not a single person was killed in those encounters. No accidental discharge, no retaliation with deadly fire. Anyway, Trump has since backed down from his threat leaving the Nigerian Army with the embarrassment of using the words of a flip flopper to fill up their ideological vacuity.

The New York Times quoted the Army spokesperson, John Agim, as saying, “We released that video to say if President Trump can say that rocks are as good as a rifle, who is Amnesty International? What are they then saying? What did David use to kill Goliath? So, a stone is a weapon.”

Once you get past the bewildering simple-mindedness packed into Agim’s reasoning, and the fact that by that statement, they practically admitted their alleged sins, you come face to face with a perplexing truth: the Nigerian Army is not run by thought! There is no ethical framework guiding their actions as an armed force. This means that their training, ethics of warfare and civilian engagement, sense of mission, actions on and off the battlefield, are not anchored on any principle. To justify their conduct with the Shiites, they had neither moral compass nor independent conviction ethically cultivated over the years to draw from so they reached for Trump (and the Bible!) We might as well have trained zombies and handed them guns.

Over the years, the Army authorities have shrugged off criticisms of their actions because they have not professionally fashioned their conception of right and wrong. In a sense, their resistance to a scrutiny of their activities is understandable; without a moral framework guiding their behaviour, there is no sin. They are therefore bound to rebuff the policing activities of surveillance agencies like AI and classify them as nosy interlopers.

All these years that Nigeria has been pumping money into funding the Army, they did not do enough to develop rounded soldiers. They did not breed learned men and women primed with knowledge; moral subjects whose responses to situations are mandated by an informed understanding of what is acceptable or not. The result is an army that has no language to express its actions and so borrows inflammatory rhetoric elsewhere.

In the absence of a regulating ethic, the military has instead been defined by what Fela Anikulapo-Kuti, as far back as 1977, called “their regular trademark”- sorrow, tears and blood. Truly, the historical events that have defined the behaviour of Nigerian soldiers since the civil war, and through the years of military government, show that their major weapon of warfare has been to use inordinate violence to get their way. When they sent them to Odi in Bayelsa State, it was sorrow, tears and blood. When they were asked to go to Zaki Biam in Benue State after the malicious killing of 19 soldiers, their answer was to unleash hell such that even those who did not participate in the crime were forced to pay with their lives. The Gbaramatu areas of Delta State, the same. Then, the Shiites in 2014, 2015, and 2018. Then, the pro-Biafran protesters. And the series of wanton violence they visit on civilians who they saved from the clutches of Boko Haram. Then, Jos in recent times, when they supposedly wanted to “investigate” the case of then missing Maj-Gen Mohammed Alkali (retd). Then Abia State NUJ centre. We could go on and on cataloguing instances of their excessive brutality, but the point is made. “Sorrow, tears and blood” has always been their essential trademark such that it qualifies to be ascribed as their ideology.

By posting the Trump video and asking us to make our deductions about it, the army not only confirmed they lack the independent thought that structures their conduct, they also showed that they have no sense of conception of what their role is – in both long and short terms – in promoting the ideals of democracy and creating a safer nation where different groups all get along. They also do not seem to be concerned about structuring their activities to cohere with other activities of national security.

They are wedded to their old methods of militarisation of spaces, brutalisation of select victims, burn, kill, shoot, and the display of other kinds of false machoism.

For the Army to take on soft targets like the Shiites and respond to stones with deadly fire says a lot about their understanding of warfare strategies. If they cannot devise a plan to confront situations where they are being pelted with stones without resorting to opening lethal fire, then how do they fight an actual war? It needs to be said that their failure to evolve strategies beyond brutalising with guns explains why the body counts pile up in their war against Boko Haram. All along, most of their victims have been people who could be scared with their firepower. Then, came the war with Boko Haram terrorists, suicidal maniacs who have no fear of guns nor respect their uniforms.

The deadliest enemy one can ever fight in this world is the one who has no fear of death and Boko Haram has shown this to be true. Despite their lack of tactics, they arm themselves with their ready embrace of death to confront the soldiers and match them force for force, brutality for brutality. At the end, it is the Army authorities that are embarrassed to let on the casualty rate they have suffered.

Going forward, the Nigerian military authorities need to understand that they need to evolve with the times. These are no longer the days you could simply intimidate people with guns and they wither under your imperious authority. The times have changed, the military needs to keep up by first developing a coherent ideology, a creed that will condition the thinking of their officers and determine how they will act and under which conditions. That means they will change their approach to how they engage in situations such as the one the Shiites posed. They would not retaliate because they take the stones thrown at them as a personal insult and which rubbed raw against their ego. Changing their approach also means they will do better than needlessly shed blood. Rather than confront a protest with the mind of returning stones with bullets, they would accouter themselves with equipment that will protect them against the fury of the mob. That way, they would show they take life seriously, and that they know that a brave soldier is not necessarily the one who wields a gun but the one who can restrain oneself from using it against a lesser-armed opponent.