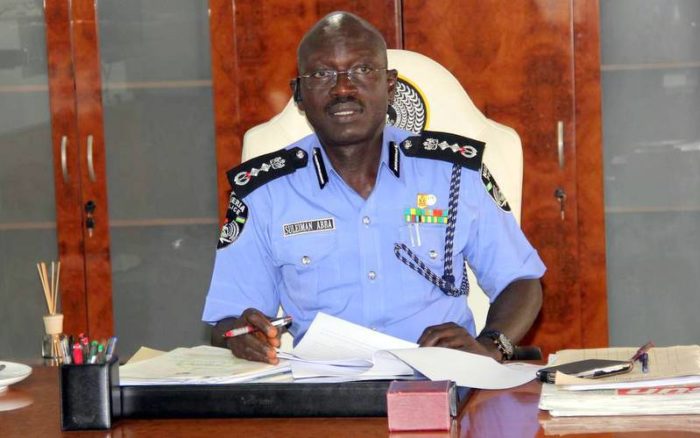 While the Peoples Democratic Party (PDP) Primaries  were holding in Port Harcourt, River State, last Saturday, I was in Minna, Niger State and I visited former military president, General Ibrahim Babangida who warmly received me. In a conversation lasting about an hour before I took my leave, General Babangida (who kept receiving feedbacks on phone from Port Harcourt) shared with me interesting perspectives about what was going on at the PDP convention before predicting, quite correctly as it turned out 24 hours later, that former Vice President Atiku Abubakar would likely secure the party’s ticket.

Quite naturally, I took mental notes of very revealing insights from a man who seems to know Nigeria like the back of his palms and they will be useful in the days and weeks ahead on this page. With the emergence of candidates for both the executive and legislative offices in the leading and the fringe political parties, the journey to 2019 is now truly on. The race for the presidency particularly has some exciting new faces and we will examine them and what they bring to the table, especially at this most desperate period in our country. In the weeks ahead, I intend also to look at some gubernatorial races, including in my state, Kwara. But today, my focus is on the drama of the past week.

Let us start with the former Inspector General of Police, Mr Suleiman Abba, who sensationally claimed recently that he resisted pressures from former President Goodluck Jonathan to help rig the 2015 poll, invariably saying he helped the APC to power. As it would happen, if his revelation was a coded message for the big shots in the ruling party that he deserves a payback, he failed spectacularly: they would not even allow him to contest the Jigawa Central Senatorial District seat on their platform. Screened out by the party leadership, Abba would not go quietly and that is where I drew inspiration for the title of this column for which I plead the forgiveness of my non-Yoruba readers.

Impunity does not sit well with Yoruba people and that is reflected in the popular adage about a policeman who goes beyond the call of duty to elicit the retort: ‘Olopa ewo ni tepe? amuni nje amuni, ewo ni ooni bo mbe?’. This translates into ‘why must a policeman, after effecting arrest, put a curse on the suspect by saying, ‘you will never get out of this’? Even though the embedded meaning is far deeper than the literal interpretation, it is not a sermon anyone should preach to our former IGP whose response to his electoral misfortune was to rain curses on those that mounted a roadblock on his way to becoming a ‘Distinguished’.

On Monday, Abba led his supporters to the APC national secretariat in Abuja where he spoke briefly to the media: “You are all aware that a list was released where I was duly cleared and another list was released delisting my name. This is not time for too much talk; this is time for prayers and I want you to join me in this prayer. The prayer is this: ‘Almighty God, any person copying you and your power should not be in the headquarters of this APC. Almighty God, if there is already one, you know what to do so that you don’t allow him (to) continue copying you. Almighty God, any person claiming to be an officer of the APC, if he will not work with the vision and mission of the APC, Almighty God, don’t allow him to use the demon style of destroying the APC.”

Incidentally, it is not only Abba that is after the Adams Oshiomhole-led APC National Working Committee (NWC); even the wife of the president, Mrs Aisha Buhari, whose brother, Halilu Ahmed, failed to secure the party’s gubernatorial ticket in Adamawa State, is not keeping quiet. On Sunday, she took to Twitter to express her anger. “It is disheartening to note that some aspirants used their hard earned money to purchase nomination forms, got screened, cleared and campaigned vigorously yet found their names omitted on Election Day, these forms were bought at exorbitant prices,” she wrote. 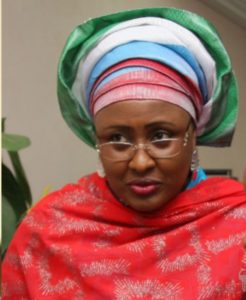 Not done, Mrs Buhari practically disowned the platform under which her husband is seeking re-election: “All Progressives Congress being a party whose cardinal principle is change and headed by a comrade/activist whose main concern is for the common man, yet, such impunity could take place under his watch. Given this development one will not hesitate than DISSOCIATE from such unfairness, be neutral and speak for the voiceless. It is important for the populace to rise against impunity and for voters to demand from aspirants to be committed to the provision of basic amenities.”

When you get such a strong damnation of the ruling party from ‘The Other Room’, then you know these are not ordinary times. But the PDP is also not immune from desperate antics. 24 hours before the Port Harcourt convention, their leaders and some of the (now-defeated) presidential aspirants took to the streets in Abuja to protest the conduct of the last gubernatorial election in Osun State. The hypocrisy of their ‘show of solidarity’ was not lost on me because as at the time these PDP fat cats were entertaining themselves in Abuja, Senator Ademola Adeleke (the candidate on whose behalf they were demonstrating after abandoning him when he needed them the most) was at Ibadan airport. He was waiting for the weather to clear so that the chartered aircraft taking him and his supporters to Port Harcourt could take off while I was waiting for my flight back to Abuja. As an aside, with his dancing steps, Adeleke would have added more verve to the PDP Abuja street show if he had been invited.

Port Harcourt of course was a different ball game. I am sure readers have heard tales of dollar rains but that is not even the real deal. The interesting snippets I got had to do with how some governors were ‘editing’ the money handed to them to share among delegates from their states while one simply pocketed the entire loot from a presidential candidate perhaps as a ‘retirement benefit’. But even with President Buhari as the sole candidate in the APC, the convention of the ruling party was also not devoid of its own drama though money was not the issue in Abuja.

According to a Daily Trust report, “while Ekiti and Ogun supported President Buhari’s re-election through a voice vote, the APC said the president got 199,724 and 586,453 respectively” which means someone counted the voices in those two states. Again, going by the report, “the president got 512,013 votes in Osun while reports from the state on the day of the election indicated that he was actually voted through affirmation by APC members”. There is more: From 1.9 million votes in Kano during the 2015 general election, APC last week conjured 2.9 million votes in the state, thanks to Governor Ganduje and in Kaduna State where the Kayode Fayemi committee, which conducted the exercise, announced a figure of 597,209 votes, Governor Nasir el-Rufai later countered with a different result of 1,956,500 votes for the president!

The embattled Zamfara Governor, Abdulaziz Yari, who hardly spends three days in the state within a month has been holed up in Gusau for the past three weeks, all in a bid to install his commissioner of finance, Mukhtar Idris as the APC gubernatorial candidate. But Yari has met his match in Senator Kabiru Marafa and others who insist that two bad terms do not deserve another, even if by proxy, leaving the APC leadership in a battle of wits with INEC over whether or not the party can field candidates for Zamfara State at the 2019 general election.

Where is the legislature in all this?

Despite Senator Dino Melaye going ahead of Dr Bukola Saraki to clean and salute the chair of the Senate President on Tuesday, former Akwa Ibom State Governor and until recently the Senate Minority Leader, Chief Godswill Akpabio, remains undaunted in his own ambition. Pasted in strategic places all over Asokoro are his posters, bearing both his photograph and that of President Buhari with the inscription, “Northern friends of Akpabio support him for Senate President”. Inserted below Akpabio’s name is the title, ‘Grand Commander of Uncommon Transformation’!

As I said earlier, these indeed are interesting times. Yet, from countering rigging with curses to the deployment of dollars in one party and monkey counting of ballots in another as well as the surreptitious campaign for a legislative office that is not yet vacant and the political endgame in Zamfara State APC, the connecting thread is the desperation for power that is not necessarily for public good.

In his book, ‘The Wealth and Poverty of Nations’, David S. Landes raised two critical questions: How did we get here? Where are we going? Not only are these questions critical for our nation today, in answering both, Landes highlighted some of the ills that plague most of the countries in sub-Sahara Africa: bad government, backward technology, inadequate education, incompetent leadership, poverty, hunger, disease, overpopulation etc.

The failure, according to Landes, is “more poignant when one makes the comparison with other parts: in 1965, Nigeria (oil exporter) had higher GDP per capita than Indonesia (another oil exporter); twenty-five years later, Indonesia had three times the Nigerian level.”

This conversation shall continue. 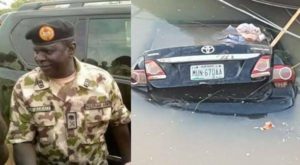 Mystery Pond and a Missing General
While the mystery surrounding the disappearance of Major General Idris Alkali (rtd) is yet to be resolved, the vehicle with which he was travelling has been found inside an old mining pond in Du District, Jos South Local Government. But perhaps more worrying is the report that shortly before the search commenced at the pond, some women from the community had staged a protest against the soldiers, with a warning that entering the pond could lead to mysterious deaths and other misfortunes in the community. The question is: Does it mean the women know something about the pond and what it habours?

Aside the General’s car and some personal effects, four other vehicles were subsequently pulled out of the pond where draining work is still ongoing. Even when no dead body has yet been retrieved, it is difficult not to locate the meaning of the vehicles inside the pond within the context of the tit-for-tat ethno-religious violence that has for years defined Jos and environs. That explains why it has not escaped the attention of many that those who are ever quick to use religion to politicize every tragedy in our country have suddenly lost their voice on the case of the missing General.

It is sad but over the years, manufacturing, manipulating and magnifying differences have always been the tactics of choice for those who hide under religion and ethnicity for political gains. While I therefore commend the military for the painstaking manner in which they are conducting the investigations into the case of the missing General, critical stakeholders in Jos and environs must find a solution to the spiral of blood-letting that has turned a once-beautiful state into a killing field.

Much more importantly, at such a delicate time as this, I implore my colleagues in the media to resist being converted into pawns in an old game that bodes ill for our country and puts a dangerous scar on our collective humanity.