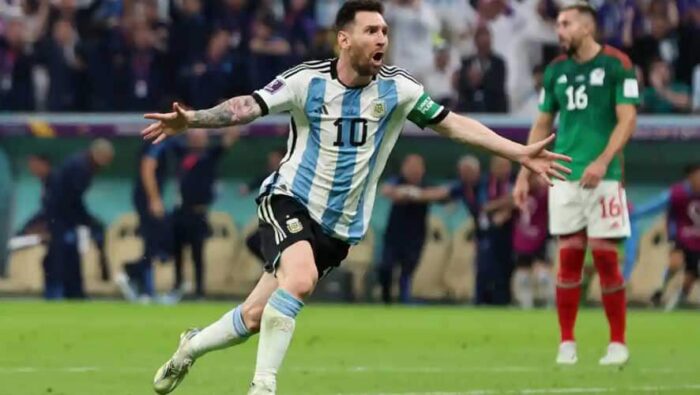 After watching France vs Denmark yesterday evening, I decided to leave the lounge I watched the game for another location for the Argentina vs Mexico game. As I was leaving, someone asked: ‘’Where are you going? Won’t you wait to watch Messi vs Mexico?’’ That’s greatness.

For the past 10 years, Argentina has been about Lionel Messi. He was made captain of the Albicelestes at a young age and since then, he has been shouldering the burden of a crazy football nation.

There is a saying that action speaks louder than words. That is what best describes Lionel Messi who is arguable the greatest footballer of all time (#GOAT).

He is a man of few words who allows his football do the talking for him. He also leads by the way he plays. That’s why the late Diego Maradona made him captain of Argentina two days before he turned 23. As a result, he became the youngest player in the history of the World Cup to be captain. Some people in Argentina were not in support of Maradona’s move. In fact, there were rumors that it was one of the reasons he dropped some of the senior players ahead of the World Cup. ‘’All for Messi.’’

However, as captain, Messi has been criticised for not speaking enough or showing emotions when his team needs him the most. But one thing we can’t deny is that he has stepped up on most occasions by his actions on the field. And he lifts his teammates by doing that.

For instance, when he scored that fantastic goal out of nowhere yesterday, it motivated the others. In fact, Enzo Fernandez’s brilliant goal was a reaction to Messi’s goal.

Two moments of brilliance. One by Messi and the other, inspired by Messi. And as Argentina progresses, there will be more moments.

When it comes to making analysis, I try to take myself out of the crowd. It’s very easy to be lost in the crowd and say what everyone else is saying. Not me. A lot of people are saying Argentina played poorly yesterday despite the win and won’t make it past a decent European team in the round of 16. I agree they played poorly and relied on individual brilliance, but I strongly disagree because football isn’t mathematics.

Also, it should be noted that Argentina were unbeaten in over 30 games before that unimaginable loss to Saudi Arabia. Once beaten twice shy. As they grow in confidence, many of the teams they face will see why they have been unbeaten.

Several of the Argentine players may be relatively unknown, but are dogged and are ready to do the dirty work for Messi. Those who tipped them as the biggest favourite behind Brazil know what they are saying.

I believe Argetnina can win this World Cup. Call me crazy but I still believe that they are strong contenders for the trophy. It wouldn’t come as a surprise to me if they win it. They have some old guards in the team and the magician from Rosario is ready to make history on the world’s biggest stage.