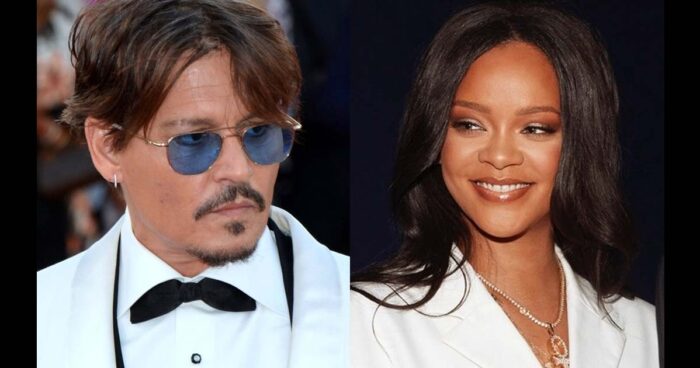 Far left fans of Rihanna are criticizing her for inviting Johnny Depp to make a cameo in her Savage X Fenty show. Several ‘liberal’ netizens took to Twitter to respond to the rumors that The Pirates of the Caribbean star was to be included in the annual fashion show.

Fans replied to Savage X Fenty’s tweet promoting the show asking them to remove Johnny’s segment of the show. “We will boycott the show if Johnny Depp is in it,” one Twitter user wrote. “If Johnny Depp has any part in this, I will no longer support the brand,” another user wrote. Other online users expressed confusion about Depp’s involvement because of Rihanna’s previous relationship with Chris Brown. In 2009, Brown was arrested for physically assaulting Rihanna. He pleaded guilty to felony assault, and completed probation in 2015. Depp’s nor Rihanna’s representation have commented or responded to the backlash.

This isn’t the first time that Johnny made a surprising cameo since he won his defamation case against Amber Heard. Depp made a cameo at the 2022 MTV Video Music Awards as the show’s mascot The Moonman in the opening segment of the awards show. The cameo was pre-recorded while Depp’s face was fixed on Moonman’s body. “Hey, you know what?” Depp said to cheers from the audience. “I needed the work.”

Depp won the highly publicized defamation trial on June 1, 2022, after he sued Heard for $50 million. The trial was held due to an op-ed Heard wrote in The Washington Post in 2018 about her experiences with domestic abuse. No names were mentioned in the op-ed although many people speculated that the article was about her marriage to Depp. Depp claimed that the op-ed cost him most of his acting jobs. Depp was awarded $15 million in damages, but Heard was ordered to pay $10.35 million due to a Virginia law cap on punitive damages.