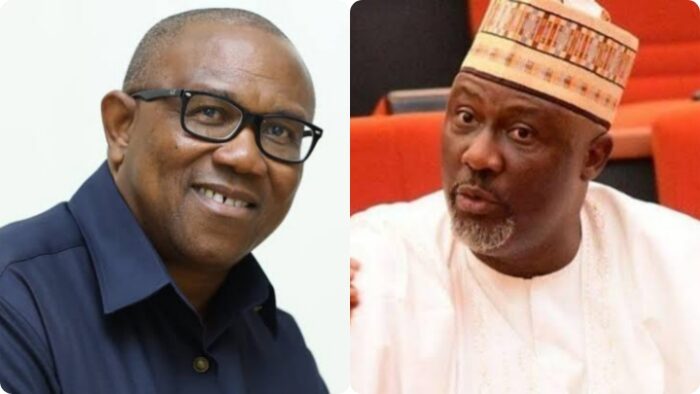 The irrepressible former Kogi West senator noted that the euphoria of his ‘Obidient’ supporters is already dying.

Melaye made this assertion while addressing journalists in Abuja on Saturday.

He emphasized that Obi doesn’t have the national spread required to emerge as President of Nigeria in 2023.

The Atiku campaign spokesperson urged Obi to return to the PDP.

He said a vote for Obi in February is a vote for the candidate of the ruling All Progressives Congress, APC, Asiwaju Bola Ahmed Tinubu, “because Obi does not have what it takes to win the election”.

Melaye asked Obi to work for the emergence of Atiku Abubakar because “Nigerians cannot afford another four years of an APC administration that will “continue with insecurity, kidnapping, banditry, rise in the price of goods and commodities in this country.”

“If you are voting for Peter, you are depleting the votes of PDP because Peter cannot make it. The Labour Party only fielded 30 out of 109 candidates for the Senate, so who is going to protect the votes of the labor party, when even fielding candidates for 109 senatorial districts, they could not. ”

Melaye also explained that no ethnic champion has ever made it as president of Nigeria.

“Buhari himself, ran on regional grounds three times and lost woefully because he was a regional champion, both in ANPP, in APP, and in CPC, he couldn’t win until he eventually ran on a national platform. When people like Atiku, Tinubu, Saraki, myself, formed a National Party, was when Buhari could now become the president. So historically, Peter ought to know that no regional champion can be president in Nigeria.”