Home Columnist Lies and truth about Obi, Atiku, and Tinubu – By Farooq Kperogi 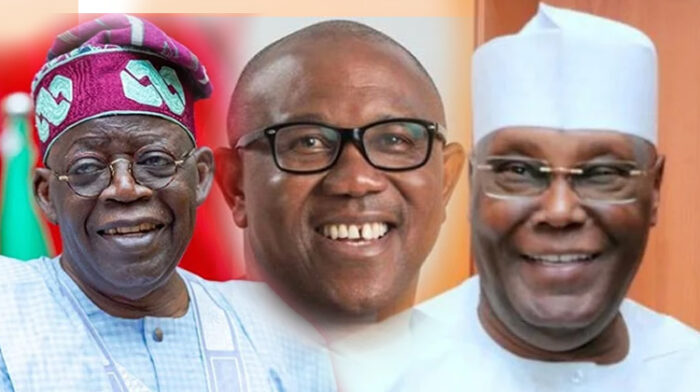 Ancient Greeks are credited with saying the truth is often the first casualty in war. I think in political campaigns, truth is also the first casualty, and we have started to see that already in the current election cycle in Nigeria.

In this column, I highlight a few of the unrelenting lies about Labour Party’s Peter Obi, Peoples Democracy Party’s Atiku Abubakar, and All Progressives Congress’s Bola Tinubu that people peddle with misplaced confidence.

Until Peter Obi caused his bachelor’s degree certificate to be published online a few days ago, his traducers had said he’d earned a Third Class degree in Philosophy from the University of Nigeria, Nsukka. Some people even went as far as saying he actually got a Pass degree, which is the twilight zone between failing and merely satisfying the examiners.

The persistence of the claims and their corroboration by people who should know helped solidify them as fact. For example, on July 5, 2022, Ifeoma Ezeonu, a Professor of Medical Microbiology and Molecular Genetics at the University of Nigeria, Nsukka, appeared to confirm that Obi got a Pass degree in Philosophy.

In a tweet that was designed to defend Obi, Professor Ezeonu said Obi’s subpar degree was the consequence of a misalignment between his actual talents and his course of study.

“As a lecturer, when I hear them talk about @PeterObi’s Pass in Philosophy, I laugh,” she wrote. “From what we know of PO today, I wonder what he was even doing in a Philosophy Dept. Lol I didn’t meet him in UNN, but those who knew him say that even as an undergrad the guy was doing business.”

After some Obi supporters attacked her for calling attention to Obi’s Pass degree (which they, apparently, thought was true,) she sent another tweet to make clear that she didn’t intend to disparage Obi or question his intelligence.

“Just in case some people didn’t get my point, [Obi] made a Pass because he was in the wrong Dept not because he’s not intelligent,” she wrote. “Since then, he has earned other certificates in what he actually loves doing – Business and Economics. That Pass is irrelevant to what he can do.”

Although Ezeonu is a professor at Obi’s alma mater, she lied— and helped to validate the narrative that Obi graduated with a Pass.

When I saw Professor Ezeonu’s tweet in July, my curiosity about the class of Obi’s degree was piqued, so I searched the Internet for more information. Then I came across a March 13, 2021, denial of this claim from Obi’s spokesperson by the name of Valentine Obienyem.

“I do not know the source of that misinformation,” Obienyem told the Source Magazine. “I have considered it a trifle that does [sic] not worth a response. Since you have gone the extra mile, may I, respectfully, inform you THAT MR. PETER OBI GRADUATED WITH A SECOND CLASS AND NOT THIRD CLASS.”

The release of Obi’s degree certificate has proved that Obienyem was right.  Obi graduated with a Lower Second Class degree. Can we now stop talking about Obi’s Third Class or Pass degree because we now know for a fact that it’s a lie?

But why did such a large number of Nigerians (including Obi’s overenthusiastic supporters) unquestioningly believe that Obi received a Third Class or Pass degree? My guess is that Obi’s uncomfortably poor command of the English language, especially for a graduate of philosophy from one of Nigeria’s finest universities, inclined people to think he must not have paid attention at school when he studied for his degree and was liable to earn worse-than-expected grades.

Atiku Abubakar, like Peter Obi, is also the victim of misrepresentation about his qualifications and identity. A recent Sahara Reporters story that revealed that Atiku bore Siddiq in his name when he was in high school, which he later changed to Abubakar via a court affidavit, is the immediate trigger for this.

In Muslim culture, every Abubakar is Siddiq and vice versa—just like every Umar is Farooq and vice versa. There’s Umar in my secondary school and university certificates which I later removed through a court affidavit in 1999. Does that make me inauthentic?

The news report also said Atiku earned a master’s degree with a GCE result. That’s incorrect. Atiku has two diplomas: a diploma from the School of Hygiene in Kano and a diploma in law from the Ahmadu Bello University in Zaria.

The UAE campus of the Anglia Ruskin University in the United Kingdom, which awarded him a master’s degree in 2021, must have counted his 40-plus years of post-diploma work experience as the equivalent of a university degree.

In US higher education, for example, we have something called experiential credit conversion where adult students can apply to get their life skills converted to college credit.

If you’re a news reporter and a photojournalist without a degree, for instance, you won’t be required to take courses in news reporting and photojournalism if you decide to get a degree in journalism. Your experience will be converted to college credit.

UK universities have a similar system. I am certain that Anglia Ruskin University counted Atiku Abubakar’s work as a health inspection and customs officer— and later vice president and businessman— as experiential learning credits that were equivalent to a bachelor’s degree.

Finally, it is now almost becoming mainstream to claim that Bola Tinubu has no certificate and that he is close to 100 years old even when he claims to be 70 years old. What’s the truth?

Well, although Tinubu has shown that he does not possess a (or has purposely chosen to hide his) primary or secondary certificate, he does have a bachelor’s degree in accounting from the Chicago State University.

After what seemed like an organized dissemination of falsehood about his degree certificate being fake in late June this year, I reached out to my colleagues at Chicago State University to find out if Tinubu attended their university.

On June 27, I shared official communication from Chicago State University’s registrar stating that Tinubu indeed received a degree in Business Administration (with a major in accounting) from the school in 1979.

And although critics say Tinubu is significantly older than the 70 years he officially claims, I have seen his transcripts from Richard Daley College (where he earned his associate degree, which is equivalent to Nigeria’s National Diploma) and Chicago State University (where he earned above 3.5 GPA on a scale of 4.0, which is equivalent to a First Class in Nigeria), and found that he has claimed to be born in 1952 in his transcripts since he enrolled in the American higher ed system.

He may have lied about being born in 1952, but he has been consistent in this lie (if it’s indeed a lie) since the early 1970s. Claims that he has changed his age are outright lies.

As I pointed out in a January 29, 2022, column titled “Clarity on Tinubu’s Age and Postsecondary Education,” it was “only Tinubu’s Chicago State University transcript that gave his year of birth as 1954, but this was attributed to a clerical error. In any case, 1954 is two years younger than 1952. Had the year been significantly older than 1952, there would have been a valid basis to speculate that it was his real birth year that he accidentally let out.”

The lies against Tinubu are difficult to extirpate because of the multiple threads of lies he has spun around himself. He had claimed to have attended primary and secondary schools that he did not attend. He claimed to have attended the University of Chicago when he didn’t, and he claims to be the son of Alhaja Abibat Mogaji and a scion of the Tinubu family in Lagos when he isn’t.

Everyone deserves freedom from malicious falsehood. It is immaterial whether we like them or not.