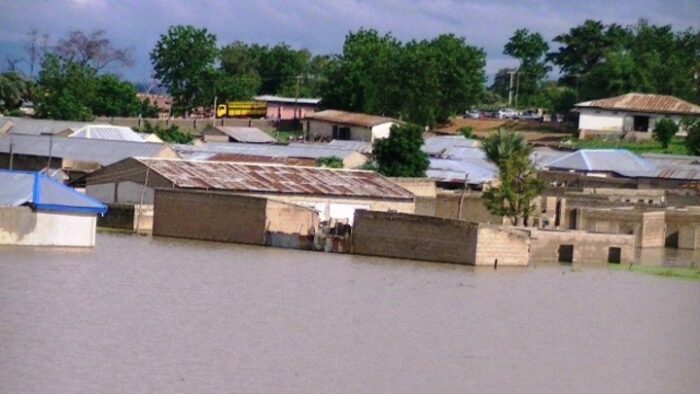 It was gathered that the flood came on following the release of water from Ladgro dam in cameroon and other dams in Nigeria.

Prior to this time the National Meteorological Agency (NiMeT) had predicted that flood would  affect 22 states and called on the states, local government and the residents in the floods plains to take precautions to mitigate against the devastating effects of flooding the various areas.

The residents of Kabawa, Adankolo, Gaduma and Ganaja have been submerged and cut off from the rest of state capital. Investigation revealed that many houses may be affected as the high tide water is constantly increase every minute.

While many civil servant who are caught unaware could not find their ways to their various offices and those who are brave enough went through canoe to the other side.

It was a lamentation galore for parents who were taking their wards to for resumption of school were forced to go back home as none can risk leaving school children to go the school at this moment.

Also the popular Ganaja road leading to Ajaokuta, Kogi East and Eastern part country has been submerged as many trucks were stocked in the water, while vehicles have to park by the roadside with commuters.

The market women in the state capital expressed their frustrations as they could not get to market with various goods.

In some areas, street urchins were seen helping people to cross to other side of the road and started extorting  money ranging from N500 to-N1,000 what they do.

A retired civil servant Mr. A Akpata disclosed that he went to his brother’s house behind Omega Hotel discovered that it has been completely submerged, pointing that it was the help of a fishermen with canoe to evacuate the property and other valuables out the water.

The four-flat building belongs an America-based business while some tenants were seeing struggling to evacuate their property.

Report from Ibaji Idah Igamela/Odolu,Omala,Ofu,Idah Ajaokuta and Kogi are more terrible as many communities went under water and   the farmers are already groaning in pains as their farmlands and the farm produces have destroyed by the rampaging floods in their communities.

The rice farmers also lamenting their losses to devastating floods. Jonathan Ogwuche of the Rice Farmer Association in Ibaji Local government area of Kogi State, stated the members have lost billions of Naira to the flood as it may take long time for the flood to recede.

Meanwhile, following the resumptions of schools which coincided with coming of flood disaster, the state government may be contemplating of extending the resumption as some of the schools may be used as Internally Displace Persons camp for a while.

The State Commissioner for Environment, Omofaye has expressed shock, saying the state government has set machinery in motion to relocate the victims to a higher ground.

Omofaye had also met with the State Commissioner for Education, Science and Technology, Wemi Jones to fashion out modalities to allow schools to accommodate the homeless victims.