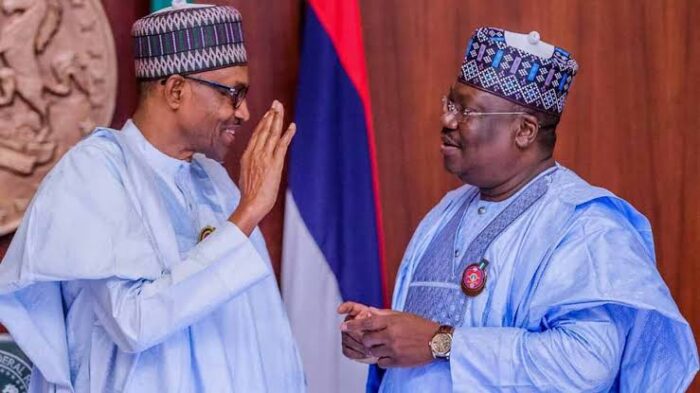 Big Brother is a fictional character in George Orwell’s dystopian 1949 novel Nineteen Eighty-Four. He is the leader of Oceania, a totalitarian state wherein the ruling party, Ingsoc, wields total power “for its own sake” over the inhabitants.

Big Brother hardly speaks. He is a man of few words. But he watches. And when he gives instructions, especially political ones, he follows to the latter.

Our own Big Brother, President Muhammadu, as we all know hardly speaks. No matter the situation of the country or his political party, he is known more for silence. In 2015, when it took him about seven months to appoint his ministers, some called it incompetence, while others who believed he wanted to appoint angels called him “Baba go slow.”

Buhari always has a penchant for leaving us guessing. He appears to be straightforward but his actions betray his appearance. Although he has been at the helm of affairs for seven years, not many can beat their chest to say they truly understand him or what he plans to do. Again, is it incompetence like some people say or does he know what he is doing?

From the appointment of his ministers in 2015 to the emergence the new chairman of the All Progressives Congress (APC), Adamu Abdullahi, (who just announced the endorsement of Senate President Ahmed Lawan as the party’s consensus presidential candidate) I think Buhari has given political analysts more headache than any other Nigerian president in history.

Some of us have grown white hair due to observations and calculations this season.

This is the kind of time my former boss, Prince Emeka Obasi, would have been very alive. He lived for moments like this. He would have have invited me severally to his house to get my predictions.

But this is beyond me and every other political guru out there. I am very sure that even Octopus Paul would find this very difficult to predict. What a season!

Even our men of God who claim to be seers have been silent. It seems God hasn’t spoken to them.

It got to a point where political writers and analysts needed something concrete as the basis of their analysis. We needed a turning point. What was the president’s position?

In 1999, we knew Olusegun Obasanjo was the man the establishment wanted. In 2007, Obasanjo made it clear from the beginning that Umaru Musa Yar’Adua was his choice.

When Buhari himself wanted to be president in 2015, it was clear that former Lagos governor, Asiwaju Bola Ahmed Tinubu had his back 100%. Right from the beginning (2013) when the party was formed, he threw his weight behind him.

But in this era, it has been from one speculation to the other. Nothing really concrete.

The turning point, however, was last week, when the president held a meeting with governors asking them to support him when he chooses a successor, arguing that in their respective states, they choose their own successors.

That was a sign that Buhari had his candidate. The question on the lips of everyone was: Who is Buhari’s man?

A few days ago, Buhari bowed to pressure by agreeing that a southerner should emerge as the presidential candidate of the party for fairness and equity.

As a result of that declaration, the south-west presidential aspirants and governors from Yorubaland under the APC met for the sole aim of choosing a consensus. According to a reliable source, the meeting didn’t end well because majority of the politicians in that meeting wanted the rest of them, to step down for Asiwaju Bola Ahmed Tinubu; a decision that didn’t go down well with some of the aspirants.

Reports had it that Osinbajo walked out of the meeting.

Failure to choose a consensus has given rise to reports about Lawan being the consensus candidate of the party.

This isn’t the first time something like this is happening. In 2015 after Prince Abubakar Audu who was from Kogi East (Igala land) died, when he was leading in the governorship election in Kogi state, aspirants from Igala land were asked to choose a consensus who would replace Audu to continue the race against Idris Wada, the incumbent governor at the time.

At the end, they all failed to back a candidate. Tinubu himself who was backing an Igala aspirant before Audu’s death, abandoned the person for James Faleke.

When those who were backing Yahaya Bello at the Villa realized that the other aspirants couldn’t close ranks, they saw it as an opportunity to field Bello as Audu’s replacement. The rest is history.

Is Adamu Abdullahi acting alone? Would he announce Lawan as the choice of the party without the backing of his benefactor, Buhari?

In politics, 24 hours is very long. The primaries hold today and there is enough room for the story to change.

Time will tell if the national chairman of the ruling party made the pronouncement on his own or had the backing of the president.