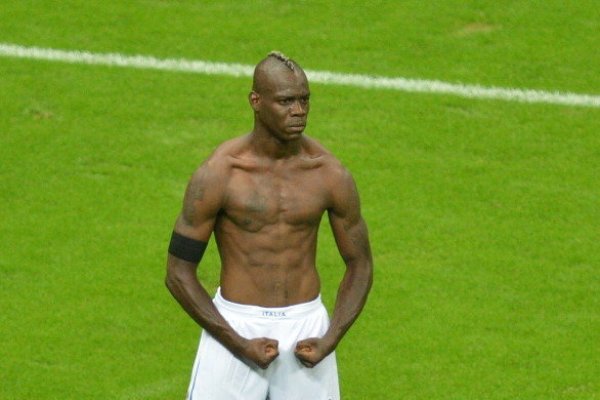 The irrepressible former Manchester City and Inter Milan forward has been named in the Italian national team for their upcoming World Cup qualifying clashes against North Macedonia and likely Cristiano Ronaldo’s Portugal.

With personalities likes Giorgio Chiellini, Leonardo Bonucci, Jorginho, Marco Verratti and Mario Balotelli joining, Italy may have enough character to go through at the expense of Portugal.

Mario Balotelli who is called ‘Super Mario’ by has fans is joining the squad for the first time since 2018 as the Azzurri prepare for a pivotal international break that will determine whether they would be in Qatar for the World Cup.

Balotelli spent years under current national team boss Roberto Mancini. While the both of them were were both at Manchester City, the club won its first title in the most dramatic fashion.

They also worked together at Serie A giants Inter Milan beforehand and Balotelli’s common temper tantrums have clearly not rubbed Mancini up the wrong way.

The 31-year-old has become somewhat of a journeyman striker in recent years and currently plies his trade with Adana Demirspor in Turkey but has clearly impressed and earned his Italy call-up as a result.

Balotelli has looked back to his best with Demirspor and has registered nine goals and four assists in 21 appearances across all competitions.

Mancini has overseen great success as Italy boss and was at the helm for their Euro 2020 success last summer after defeating England on penalties at Wembley Stadium.

However, their attempts to confirm their place in Qatar for the World Cup later this year have proved far more difficult and there is every chance the reigning European Championship holders could miss out on the tournament altogether.

They have been drawn against North Macedonia and providing they get the job done against the Eastern Europeans Balotelli will face off against current Manchester resident Cristiano Ronaldo.

Portugal’s dramatic 2-1 home defeat by Serbia ensured Fernando Santos’ men will also drop down into the play-off rat race as they too try to book their place in Qatar.

Ronaldo is desperate to add a World Cup gong to his staggering trophy cabinet that includes Euro 2016 after Portugal toppled France in Paris.

Balotelli and Co. would not have home advantage were they to beat North Macedonia and Portugal beat Turkey.

Should Italy lose either clash, it would mark the second World Cup in a row they have failed to qualify for after missing out on Russia in 2018.

Any minutes for Balotelli in either game will spell the end of an exile from the international set-up that has lasted over three years, with the striker’s last minutes for his country coming in a 1-1 draw against Poland in the 2018 UEFA Nations League.

His previous outings with his country have proven he can be a man for the big occasion.

Balotelli’s brace against Germany a decade ago remains one of the most iconic moments in European Championship history.