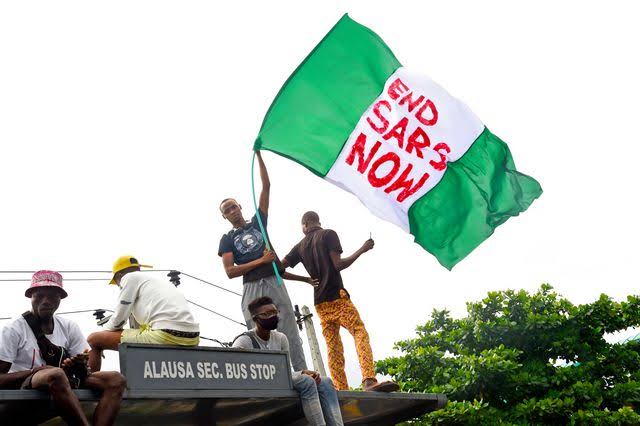 Whatever angle you are sitting at, Lagos is without argument Nigeria’s most important state. Abuja may be the nation’s capital, politically, but Lagos, the economic capital, is the most vibrant measure of Nigeria’s political health.

If the health of the political sector is poor, Lagos is often the first to know, or to express it. It also holds the largest concentration of the nation’s mass media outfits, which means it is best-placed for anything relating to knowledge of the tea leaves, whether you are buying or selling them.

In the past two decades, since Lagos came under the political spell of one Bola Ahmed Tinubu, the “National Leader” of the All Progressives Congress, Lagos has emerged as an asterisk for the notion of what constitutes democracy, with Tinubu single-handedly determining who becomes governor and who does not.

Following the historic October 2020 #EndSARS protest which ended in the shooting of unarmed protesters at the Lekki toll gates, Tinubu’s latest handpicked Governor, Babajide Sanwo-Olu, set up an eight-person panel to review the experience and to make recommendations to the government.

It was the right thing for the governor to do. That is, it was the popular thing to do: take control of the narrative and establish a mechanism by which the government would emerge with a vibrant, positive image.

It was a difficult moment in history. There was evidence that the protesters, many of whom had been demonstrating for days armed only with Nigerian flags and their insistence that brutal police practices, particularly of the Special Anti-Robbery Squad (SARS) variety, were making life—and sometimes living—impossible.

Not only had the protests in Lagos been completely peaceful, they had also been very well-organised, with protesters being extremely well-behaved.

Then came dusk on October 20, when, inexplicably, the army arrived—it was at first unclear who they were—and shot into the crowd, killing and maiming.

Governor Sanwo-Olu’s judicial review panel, headed by Justice Doris Tomilayo Okuwobi, submitted an exhaustive, 309-page report last week in which it confirmed that members of the Nigerian Army and the police had indeed used live bullets on unarmed fellow citizens, resulting in multiple fatalities and injuries.

The leaked report affirms that while there was indeed an #EndSARS protest across Lagos State, the protest in Lekki was peaceful.

From its findings, I quote one paragraph: “The Panel finds that the protest was about police brutality and police reform, especially the various experiences of youths in the hands of the Special Anti-Robbery Squad, SARS. Protesters had prayer meetings, worship services, Jumaat services, musical interludes, ambulance services, rescue operations, security services and they had meaningful and peaceful interactions with the Lekki Concession Company, Loatsad Promedia, the Governor of Lagos State and other top officials of the State Government and even the security agencies, prior to October 20th 2020, all consistent with peaceful and orderly conduct, not generally associated with hoodlums.”

And this: “International Human rights law treaties signed and ratified by Nigeria specifically International Covenant on Civil and Political Rights (ICCPR) and the Nigerian Constitution protect the rights of people to peaceful assembly, to freedom of expression and to association, as well as to participate in the conduct of the public affairs of their country.”

Further underlining that there had been absolutely no mayhem or violence at the Lekki Toll Gate to have attracted official violence, the report asserts: The Constitution of the Federal Republic of Nigeria, 1999 as Amended, in section 40 grants the right of assembly and association, freedom of movement in section 41 and freedom of expression in section 39. There was thus no need for deployment of soldiers to the Lekki Toll Gate to disperse peaceful protesters in flagrant violation of these entrenched fundamental rights.”

Following its exhaustive treatment of the involvement of the police, the report saying something that is critical to the cause of law and order in Nigeria that must be kept on the front burner: “The panel finds most alarming and concerning the testimonies of the ACP Oludotun Odubona who appeared on behalf of the CP and that of CSP Raji Ganiyu, the DPO of Maroko Police Station that no investigation was carried out in respect of the incident of 20th October 2020, because there was no basis for such investigation and no complaints were lodged with the Nigerian Police Force by victims or families of victims,” adding,“This amounts to a dereliction of duty.”

This is a comment which applies to almost every police-involved matter in Nigeria where the cause of justice requires the police simply to do its “duty,” not as a favour to someone or in expectation of reward.

The report concludes with 32 excellent recommendations. The first concerns ways of improving the quality of policing in Nigeria, which is sadly the worst in the world. The only missing component in the five-part police recommendation, is the reporting component. Policing in Nigeria will never improve, no matter what you put into it or drill from it if the agency is not made accountable. It must report rigorously in writing on its daily work up and down the chain of command.

In the end, the report of the Justice Okuwobi panel is a very simple labour of love. It is a thorough, if imperfect report, and a gift to Governor Sanwo-Olu and the cause of justice and good governance in Nigeria.

That is if the governor’s focus is on justice and good governance, in which case the panel has made his work easy as many of the recommendations are easy to implement.

However, if he had simply meant to look decent and his real motive was not justice and he has no eye on his legacy or his relevance, he will find many of the recommendations to be a tremendous challenge. We await his White Paper in two weeks.

Whatever happens, I take this opportunity to commend Justice Okuwobi and members of her team for their excellent effort. Very often in Nigeria, citizens of courage and commitment betray their opportunities and community, but you have given us new hope. You are a shining moment. This is now in the hands of others, and we will see whether bluster is what they are made of. I’m talking to you, governor.