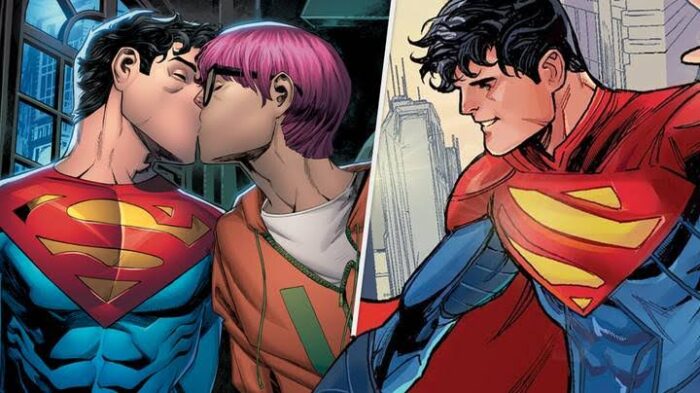 Until this year, though, every comic iteration of Superman has been besotted with longtime love Lois Lane. But in an upcoming issue of a new “Superman” series, the Man of Steel enters into a queer relationship.

The fifth issue of the DC comic series “Superman: Son of Kal-El” will confirm that the new Superman — Jon Kent, child of Clark Kent and Lane — is bisexual after falling for Jay Nakamura, a male reporter, DC announced this week.

The “Superman: Son of Kal-El” series follows Kent as he becomes Earth’s new Superman and grapples with the immense weight of his new gig. Nakamura, a bespectacled writer with a bubble-gum pink mop, first appeared in the series’ third issue as a shoulder for Kent to lean on when the business of being Superman gets too rough.

The particulars of the issue’s plot are to be revealed in November, but images from the comic show Kent and Nakamura sharing a kiss and sitting together atop a building, their legs dangling off the edge.

Series writer Tom Taylor said the evolution of this new Superman is keeping with the values the character has always represented — and, importantly, reflects the experiences of many comic fans.

“Superman’s symbol has always stood for hope, for truth and for justice,” Taylor said in a statement. “Today, that symbol represents something more. Today, more people can see themselves in the most powerful superhero in comics.”

In an August interview with Nerdist, Taylor teased that Kent would find a “very good friend very early on … and they’re going to have a big role in this.”

NPR’s Glen Weldon, who’s written a book on Batman and regularly writes about comics, said that the queering of characters like Robin and Superman is “progress,” but because the characters who come out are not the canonical iterations of heroes — Drake isn’t the only Robin in the DC Universe, and Jon Kent’s father will always be the best-known Superman — the plot developments aren’t as significant or genre-shifting as they seem, Weldon wrote this week.

Still, Weldon said, a bisexual Superman and queer Robin are worth celebrating — they’re not a one-dimensional villain or side character who’s quickly killed off, but the “heroes of their own stories.”

Fans can read more about Kent’s burgeoning romance when the fifth issue of “Superman: Son of Kal-El” is released on November 9.