Home Columnist Emefiele has nothing on AbokiFX 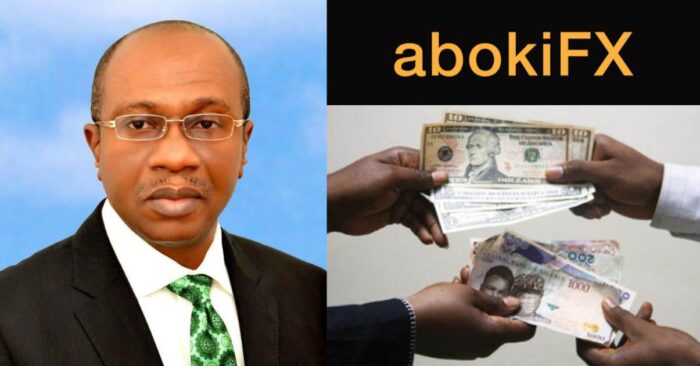 The press conference where the Central Bank of Nigeria Governor, Godwin Emefiele, castigated abokifx.com was painfully pathetic. For a banker and economist, he was long on allegations and emotionalism and short on actual substance. Even though he stated that the information he had were “preliminary findings,” it was still woefully inchoate. Nothing he alleged translated into a significant case against abokifx. The most embarrassing part was when he asked the denizens of social media who would defend abokifx to come to fight him. Bolekaja should be beneath an official entrusted with a nation’s financial destiny. You defend a national economy with policies, not punches.

Emefiele’s lack of clarity on such a grave issue typifies the Nigerian bureaucrat’s sloppiness regarding procedural integrity. I want to remind him that the reason most people knew that the so-called supercop Abba Kyari was likely guilty when the FBI released their report about his activities was the amount of evidence they had compiled. Anything less by the FBI would have appeared frivolous. Institutions only grow when the people that work in them abjure laxity. Unfortunately, high-ranking Nigerian leaders hardly approach the public with evidence they have done their homework painstakingly enough. If Emefiele were not standing on dubious grounds, he would not have asked his potential critics to come forward and fight him. Threatening people with “we will pursue you,” “we will report you,” and “we will find you” made him look unhinged.

A whole CBN governor accusing an individual with a single website of manipulating the currency of an entire country is quite serious and probably an imprudent thing to publicly announce too. If a single person can manipulate the currency of an entire nation, it means such a fiduciary instrument lacks an institutional grounding. Admitting that degree of fickleness would make potential investors wary. Emefiele should not only have substantiated his allegations but he also ought to have followed up quickly with an announcement of the safeguards they have put in place to stop further haemorrhage. While I find Emefiele’s allegations unconvincing, I am also not trying to vindicate abokifx on this. In a liquid economy, manipulative acts are possible through various supposedly mundane activities. Billionaire Elon Musk’s and former Republican president, Donald Trump, have boomed and bursted stocks with tweets. Footballer Cristiano Ronaldo wiped out a quarter of a billion off the value of Coca Cola with a gesture and a word. So, yes, abokifx’s listing black market rates could have created a loop where reporting the figures and patronising them become mutually corroborating. However, nothing Emefiele said proves this.

First, Emefiele stated that they had been studying abokifx activities for two years. By the end of the press conference, he still asked abokifx to come forward and give him information about how they obtain the data they publish. So, what exactly did the report compilers spend their time doing if they did not even have as much as those basic facts? He also said abokifx “sold tens of millions of naira in FX to Nigerian companies,” and then vowed that “we will find those companies as well.” With that, it was clear that Emefiele was merely speculating the activities of abokifx. If he had not yet found the companies they allegedly traded with already, how did he know what they transacted? As a banker, he should have known better than merely throw around a vague amount like “tens of millions of naira” when he could have stated the specific amounts that had been traded and over what period. By his own admission, they spent two years compiling all the information that led to their decision. Yet, there he was with no appreciable details to share.

Second, Emefiele says that the owner of abokifx alongside his company has “over 25 bank accounts with about eight banks” (notice, again, how he uses adverbs to quantify when he ought to give specific details?) One would have expected him to at least tell us how abokifx or the supposed owner managed to open so many accounts and if it was illegal to do so. Did they open them with multiple IDs or what? If the IDs used to open those accounts were not fake, and the banks allowed it, what exactly did they do wrong? Because Emefiele switched between the first-person singular pronoun when talking about the supposed owner of abokifx and the third-person plural pronoun, it was hard to tell who he referred to when he said, “They get naira loans, use it purchase dollars, take a position, change the rate over a period, sell the dollars, and make a profit.” Who are the “they” and how did this “they” obtain these multiple loans from the banks? Are loans even that cheap to procure from Nigerian banks?

Again, it would have been far more useful if Emefiele had coherently narrated how these alleged frauds were perpetrated. He could have described where they purchased the dollars, when, and how they managed to do so considering how hard it can be obtaining hard currencies from the banks. How come the banks that never have enough to sell to individuals kept plying these people with dollars to the point they made profits to the tune of “tens of millions of naira”? Emefiele should have provided several concrete examples of these unethical transactions and the specific dates they happened. That way, we can follow the trajectory of abokifx’s activities more logically. But Emefiele could also not have done that. He had to hold back on the details of the factors that make such transactions feasible in the Nigerian system. The supposedly “nefarious” activities he attributed to abokifx are what many among the Nigerian political elite do for a living. It is why they became overnight billionaires. To tell the whole truth is to expose his own paymasters. That was why he had to resort to emotional outbursts. In any case, why even bother to address a press conference? If he could not speak candidly but still desired a scapegoat to publicly flagellate, he could have referred the case to the Economic and Financial Crimes Commission.

Emefiele of all people should know that what abokifx is doing is what newspapers too used to do a while back. What exactly is groundbreaking about daily reporting official rates and parallel rates? Emefiele claims that abokifx “collects its proceeds through a particular ATM in London.” So, Emefiele wants us to believe that the transactions sucking the blood of Nigerians dry are carried out through just one ATM in London? Given that you cannot withdraw more than £300 – £500 a day from a single cash machine, how much proceeds does this person possibly make from speculating currencies that disrupts a national economy? And all of the “tens of millions” come out of one ATM? By making a fool of himself publicly, Emefiele did irreparable damage to his office.

My experience using abokifx for years is that there is always a disparity between what they report and how much you actually get from the BDC agents who hustle you on the streets. Their scale is usually off by N3-5, and which is expected since abokifx claims they compile their data from multiple BDCs. Most likely they set the rates on their website from the average rate they compile for the day. It also means that if they overshoot the figures, the reality on the ground will not correspond. If such disparity happens more than a few times, they will lose credibility with their base. A whole CBN governor should have known better than ascribe the power to determine the value of the naira to a single website. If abokifx had that much power to determine the value of the naira, he should also ask them to set the rate at one dollar to one naira and see what happens. In fact, if a single website run by probably a few individuals can do that much damage to a national currency, maybe, Emefiele should relinquish his official position to them. With that much resourcefulness, they will probably do a better job at managing the naira than he has ever done.