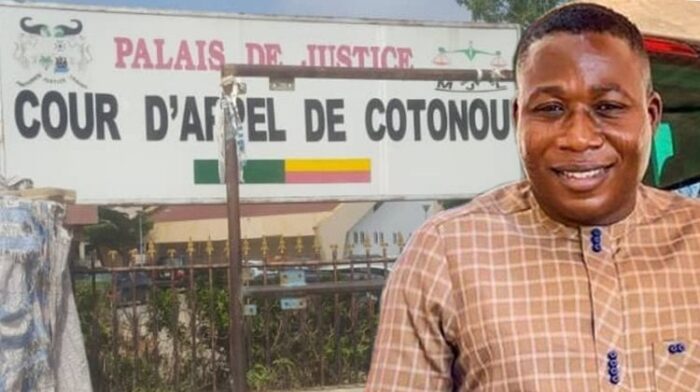 Sunday Adeyemo, a.k.a. Sunday Igboho may face 21 years imprisonment over the Beninese passport he tendered before his aborted trip.

Igboho and his wife, Ropo, were arrested on Monday at the Cadjèhoun Airport in Cotonou.

The secessionist, wanted in Nigeria, was said to have presented a fake travelling document to Immigration officials in Benin.

On July 9, the Nigeria Immigration Service (NIS) announced that Igboho had been placed on stop-list.

NIS alerted Nigeria Police, Department of State Services (DSS) and National Intelligence Agency (NIA) that he was making efforts to acquire a new Nigerian passport as part of plans to flee.

As the authorities uncovered his strategy, Igboho, it was gathered, made arrangements for unofficial Beninese passport.

Igboho and Ropo were stopped on their way to Germany after security operatives discovered his real identity.

In an interview with BBC Yoruba, a lawmaker in Benin, Mr. Tolulase said the situation is not looking good for the agitator.

The legislator explained that though Benin is a small country, the laws are strictly enforced.

“On this passport issue, take me for instance, I’m from Benin but married an Ijebu woman. We have five kids. She gave birth to two in Nigeria, three in Benin.

“Only the three have Beninese passport, the two others and my wife do not have. She can only apply if we marry legally in Benin.

“Even after the court wedding, the passport is not issued immediately. She will wait for some years and must go through the processes.

“The first thing you must have is National Identity Card. Now, if you’re not a citizen, the only way you can get a passport is if you legally marry a Beninoise.

“You can see it’s not easy. So, if you procure a fake one, you’ll be uncovered because you don’t have a National Identity Card. The details are linked.

“The card must have a family name. About three to five of your relatives must confirm to the government they know you and your early years.

“It is after they testify that the court will issue the card, which can then be used to apply for a passport. If such is doctored, the punishment is 21 years imprisonment. It’s a serious offence.

“And it’s not just the owner of the fake passport that will be prosecuted, all those who know about it will be charged to court.

“On Chief Sunday Igboho, the Beninese government will carry out a detailed investigation that will expose everyone involved in his passport obtainment”, Tolulase said.

Meanwhile, lawyers for the Yoruba Nation advocate are fighting against his extradition to Nigeria where he may face treason charges.

The federal government, its agencies and South-West governors remain silent on Igboho’s ordeal.

Igboho’s supporters within and outside Nigeria are calling for his unconditional release, insisting self-determination isn’t a crime.

President, Women Arise and Centre for Change, Joe Okei-Odumakin, has appealed to the Beninoise government not to repatriate Igboho.

She said Igboho cannot be assured of safety or justice in Nigeria and “will come to grief if he is extradited under the prevailing circumstances”.