Home Columnist This is who you are, America – By Tayo Oke 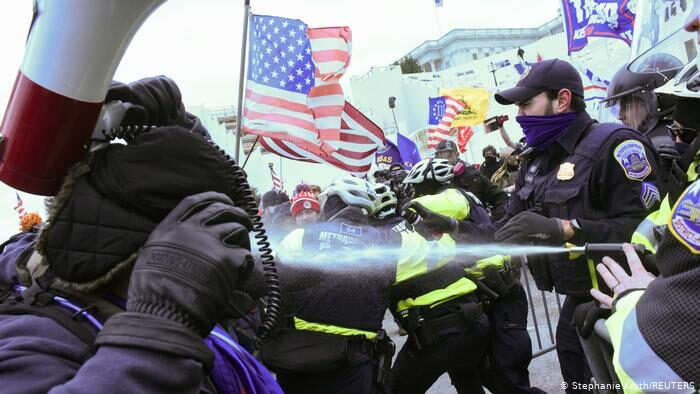 After watching the carnage visited on the US Congress last week, violent protesters storming the premises in the middle of a session, ransacking various offices including that of the Speaker of the House of Representatives, and the Senate, overwhelming law enforcement officers etc, many commentators and pundits variously described the incident as a “coup attempt”, an “insurrection”, and an “attack on democracy”.  President-elect Joe Biden quickly appeared on TV to declare: “This is not who we are”.  Former President Barack Obama said the same thing in the wake of the Charlottesville attack organised by a far-right group in the US state of Virginia in 2017. He also said it while addressing the Islamic Society in Baltimore on February 3, 2016. In fact, he reiterated this so many times during his Presidency that a video compilation of him doing so 46 times was made by David Rutz (freebeacon.com).

Previous American presidents have also had cause to spurt out the well-worn phrase. Latterly, it has gone into everyday political vocabulary, and people are starting to internalise it, because it helps them break loose from the open displays of aggression by far-right activists, and other violent street protests they see as “un-American”. To both conservative and liberal elites, American exceptionalism lives on. America remains a place where everything is possible; the “shiny city on a hill”, “land of the free, home of the brave”. Really?

The march on Capitol Hill has been instigated by President Trump in the wake of his defeat at the polls in the November 3, 2020 presidential election. He had refused to accept the result, claiming “widespread fraud”, but producing no shred of evidence. In his warped mindset, Trump had pushed for, and indeed, secured the nomination and Senate confirmation for several dozen ‘conservative’ justices across the land in the expectation that one good turn deserves another. He had banked on them ruling in his favour when the election petition came to court. So, he was dismayed by how swiftly his efforts to litigate the election results in the courts failed, countless times. So, not one to readily admit defeat, he resorted to telling lies about how the election had been “stolen” from him, and his so-called “base” swallowed it hook, line and sinker. After all, more than 70 million Americans had voted for him, so, there was no shortage of volunteers to turn out for protests on his direction. They did that in huge numbers and were able to disrupt the certification process going on inside Congress on January 6, 2021, relatively easily. The world stood aghast in disbelief. “This is not who we are” echoes through the American liberal media. Many of America’s traditional allies took measured responses, many also amplifying the “this is not America” claptrap. Traditional “enemies” like (Iran, Turkey, Venezuela, Russia, China etc), were quick to comment on the unfolding situation with a dose of schadenfreude, as if to say, hey, you are just as bad as you have so often said about us. What goes round, comes round.

Election violence is “un-American”; it is something that happens in far-away countries. That is the height of America’s claim of moral superiority that has bordered on pure arrogance for decades. Guess what? Violent protest is as American as it comes. America, as a country, is indeed a very violent society. This is the country where many had fought to keep a major proportion of its population in perpetual slavery. Teargas and police dogs were used to mow down the people protesting about their civil rights as recently as the 1960s. The Confederate flag, the supreme symbol of racial oppression, is still being flown in several cities across the US. One was carried into the Capitol by the protesters. America is a society still hopelessly divided by race and ethnicity. Trump’s jaundiced view of Mexicans as: “rapists, drug addicts, and murderers” during his election campaign in 2016 did him more good than harm. Trump had the overwhelming support of Christian evangelicals despite being an unabashed misogynist philanderer, and in spite of his numerous racist utterances.

Gun violence by the police on poor innocent citizens, especially if you are of the wrong skin colour, is legendary in America, as well as random neighbourhood shootings, wanton massacres of people in places of worship, schools and children playgrounds. America harbours 22% of the world’s prison population, much of it homicide and drug-related. An astounding figure for a country representing only four per cent of the world’s population. All this is fuelled by income inequality in America, one of the highest in the world. It is 40th in the level of inequality out of 150. The same level as Jamaica, Peru and other Latin American countries.

That is not all. The top one per cent of the American population owns 40% of its wealth. The rest simply scrambles for crumbs wherever and whenever. You do not have to take my word for this, do the research. The United States is the largest debtor in the world at $27 trillion. Its debt to GDP stands at 104.3%. Yet, the masses are constantly being urged to go chasing the “American dream”(by force if necessary).

There is a constitutionally-enshrined right to bear arms. Culturally, psychologically and morally, America is arguably the most underdeveloped country on earth. Is it any wonder that there is not more violence in a country built on, and made for violence?

On top of all that, we are told that the Trump “base” are essentially rural non-college educated blue-collar workers. This is largely a euphemism for people living in blissful ignorance of their own environment and the rights of others around them. In addition, there is the demographic trajectory of America inexorably tilting towards the current (white) majority becoming the minority by 2050. The fear embedded in this inevitable demographic eclipse is as raw as it is visceral. The thought of the Mexicans, the Latinos, Indians, African-Americans and all the other black and brown faces suddenly constituting the majority in the near future scares the hell out of many people, especially those with racist tendencies. Trump has effectively tapped into that raw emotion and amplified it. They want to “take their country back”. Meaning, they want to turn the hand of the clock backward. Let us be clear-eyed about this, the election of President-elect Biden was not exactly a repudiation of Trump(ism). After all, the Republican Party actually gained seats in the House of Representatives. Plus, the hitherto “vulnerable” Senate seats held by Susan Collins (Maine), and Lisa Murkowski (Alaska) did not fall to the Democrats as was widely predicted, and despite the two senators having voted against impeaching Trump earlier in the year.

Democrats poured unprecedented millions of dollars into the Senate races in Iowa, North Carolina, South Carolina etc, but still failed to win. Even the two Georgia Senate run-off races won by the Democrats last week, were too close to call until the last minute.

So, despite this week’s denouement of Trump’s eviction from office, what the above is really saying is, if what Trump and his base stand for is so “un-American”, how come the Democrats did not sweep the board and coast to victory on all fronts with their very “American” political platform? The reason is precisely the opposite. What we have witnessed in the last week, the violent protest, the anger on the streets, the attempt at electoral overturn, and the raw exercise of power in the person of Trump are as American as it comes. Pity it has taken the desecration of Congress for American citizens themselves to wake up to what the rest of the world had understood for a long time.

Culled from The Punch