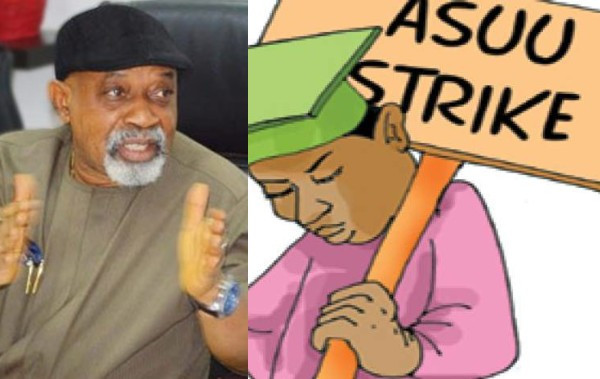 In the long-drawn battle of wits between the Federal Government and the striking members of the Academic Staff Union of the Universities, ASUU, this column cannot afford to sit on the fence any longer.

The strike has lasted more than eight months. The lockdown of coronavirus pandemic combined with the lockout of ASUU, has kept the  children at home  for an inordinately long time. It is about time that both sides to the dispute now allow common sense to prevail over folly.

At the end of this unproductive duel, government will have to shift grounds to  meet most of the demands of ASUU, and  the dogged but recalcitrant fighters  will have to make some concession and call off their strike action for the sake of the suffering children and the plight of their parents.

The case between the federal government and ASUU, especially this one, is not the  type of case that requires a magistrate to make a pronouncement as to who is guilty and who is innocent. In my view, there is always enough blame to go round. Governments tend to have more of the blame. And I mean all governments. What comes out to  the more perceptive public, each time there is an issue between government and labour, is that government officials are forced to enter into agreements they know they cannot keep or are unwilling to keep. They do that  hoping to resolve the issues at hand and move on, but they are merely postponing the evil day.

Or when they yield to the genuine demands of the workers, they give the impression they are doing them a favour. Or they prevaricate to prolong discussions and create unnecessary tension only to come round and do that which is just and right after incurring unnecessary costs. Which makes  you to wonder whether folly is truly one of those derivative principles of public policy. I can bet you that at the end of the day, ASUU will get most of the demands from government. Failure on the part of government to justify its inability or unwillingness to do the right thing at the right time gives the impression that on this particular occasion, it is on a thin ground.

Both the government and ASUU are fighting for the soul of education in Nigeria. Without sound education, there is really no hope of the country catching up with the rest of the advanced world some of whom have since moved from basic  technology to artificial intelligence; many of them  boasting of the state-of-the -art health infrastructure that makes them the destination hub for medical tourism.  For these countries, the axiom that the economy that works is the one that is driven by knowledge is not merely an academic pontification or   something from the science fiction.

Following the examples of India, China and Indonesia, our own President Muhammadu Buhari has vowed that he would provide the structures and the political will to take one hundred million Nigerians out of poverty into prosperity in ten years.

One of the required structures, one can’t afford to ignore, is sound education plus discipline and visionary leadership. So crucial it is that UNESCO’s benchmark for funding education has remained 26 percent of national budget. It does not require ASUU to go crawling and begging, or go on strike, to prompt education planners and the political leadership to cultivate  the right frame of mind and the willingness to give education the right push, to scale up education budget which has been stuck  between six percent in 2017 and  6.3 percent in the 2021 budget proposal, a far cry from what UNESCO has prescribed.

But I can understand the paucity of funds. That is why my sympathy goes to Adamu  Adamu, Minister of Education, whose call for a declaration of  national emergency in education is yet to receive appropriate attention.

It was fashionable in those days to engage in an idle debate whether or not education standard was falling in Nigeria. Today, it does not require any ghost from the pit of hell to give us the right answer. Tying our university system, despite its much trumpeted autonomy, to the apron string of the choking bureaucratic ineptitude, can only have the undesirable effect of pulling us down instead of lifting  us up. From where we are today, we only need to go up   even if we  have to be dragged   kicking and screaming.

I have had  the opportunity of engaging with ASUU leadership at the national level when I had the privilege of serving the nation as Pro-Chancellor and Chairman of the Governing Council of Ahmadu Bello University Zaria from 2005 to 2007. From that experience, I make bold to confess that I have since embraced the school of thought that claims, even in grandiloquent manner, that without the input of ASUU and other  unions, the public university system as we know it would have collapsed  irretrievably a long time ago.

This is not to suggest that as a trade union they are infallible. They may be selfish in some of their demands. But on the whole, they mean well.   Since they arrived on the scene in 1978, they have waged epic battles with government and got bruised in the process. Under the military  regimes in the 80s it was serially banned and unbanned with its leadership under lock and key.

But getting  the public to understand them is not an easy business proposition   largely because of  the ease with which ASUU is forced to embrace strike instead of dialogue. This apparent proclivity for strike, closing the lecture halls and going home at the mere drop of a chalk, creates the impression among the largely unconcerned public that they, these detached academics, are irresponsible, uncaring and insensitive to the feelings of the public at large.

Unfortunately, the issues that eventually decide them to embark on strike do not  always  start like matters of public concern. They come in the realm of family matters, or more appropriately, as  a small  matter between an employer and the employee. Bread and butter concern. It is when they  fail to agree, when communication breaks down,  that we, the concerned members of the  public especially those of us whose children are in the care of the public universities, begin to hear some grumblings. But these grumblings  begin to  get more disturbing when the  agitated students begin to put their parents on notice to start looking for their  transport fare back home in the event that strike  becomes the inevitable outcome of the prevailing palaver.

The current long drawn battle presents another  opportunity for us to see how folly in government goes into the way of common sense and make an issue where none exists  –   like making a mountain out of a mole hill. A few of the ASUU demands that have proved  a difficult nut to crack have to  do with their welfare: release of earned academic allowance, renegotiation of 2009 agreement which include salary package of the lecturers. But  on their shopping  list is the release of 1.1 trillion naira revitalization funds as agreed with government  way back in the 2013 memoranda of understanding.

No matter how dubious ASUU critics want to be, they cannot in clear conscience accuse its members of selfishness. This figure, huge as it is, may not even be enough  for the revitalization of the public universities many of whose campuses and other facilities have fallen into disuse.

Another irritating matter that should not be allowed to hold down talks and prolong the strike is the compulsory application of the Integrated Payroll and Personnel Information System, IPPIS. Given  all the explanations by both sides to the dispute – the government and ASUU  –  this system, designed for classical, General Order- regulated civil servants, has no place in the university system. Taken together with  its cousin, the Treasury Single Account, TSA, they have the dubious role of limiting space for operations in typical university system.  It is not a matter of ego or even weakness. Government must admit its error and free the university staff from their restrictive applications. This is the least that common sense demands.