Home Columnist We have not many fathers – By Femi Adesina 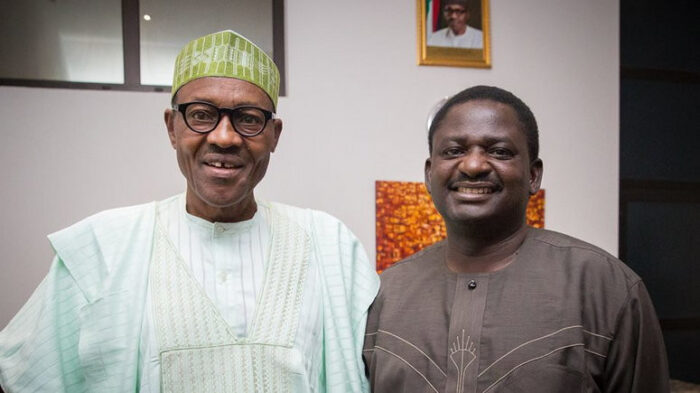 Deputy Secretary-General of the United Nations, our own Hajia Amina Mohammed, led a team to visit President Muhammadu Buhari on Monday.

Many things agitated the minds of the UN team, which said it was visiting to highlight issues dear to the heart of the global body: COVID-19 and its ravages, security, humanitarian aid for displaced persons, climate change, the EndSARS campaign, and many others.

Many times have I seen the President respond to the EndSARS protest and its fallout, both privately and publicly. He responded while launching a youth empowerment scheme on October 12, speaking to the restive youths directly, that their agitation against police brutality was well meaning, and that their voices had been heard. He spoke publicly in a national broadcast again on October 22, after the falcon could no longer hear the falconer, and anarchy had been let loose on the land. Privately, at many in-house meetings, he had spoken, and one of such was at the October 23 parley with all the former living heads of state.

At the Federal Executive Council Meeting a fortnight ago, the President directed all Ministers to return to their States, and engage with the Governors and the people. The following week, he received reports from Minister Babatunde Raji Fashola, speaking on behalf of Ministers from South-West, who had visited Lagos and came back with video and pictorial evidence of the carnage and destruction.

Governor Babajide Sanwo-Olu of Lagos State also came, bearing documentary evidence of the primitive fury that had swept through the country’s commercial capital, all in the name of youths protest. The President received everything soberly, sadly; dolorous and mournful. Who let the jinn out of the bottle? Who let loose the Devil, and had found it difficult to rein him in again?

Perhaps the place I saw the President exhibit the greatest stoicism of a father, beleaguered by the actions of his rebellious children, was when Amina Mohammed visited. It was quite touching to hear President Buhari declare: “It is in the interest of our youths to keep the peace. They want jobs, infrastructure and development…and that is what we are fighting to correct. We can’t just sit, fold our hands, and do nothing. We are doing our best within the limits of resources.”

Rather matter-of-factly, the President said his own generation was “on the last lap” and was exiting. It’s the youths that would take over the country, and the world. What would they then preside over, if the country had already been incinerated, and reduced to rubble? If infrastructure that took decades to build, and trillions of naira to acquire had been pulverized, and trampled under foot, won’t the new youthful leaders spend trillions of naira again, to rebuild same infrastructure? Classic case of cutting the nose to spite the face, if you ask me.

As President Buhari spoke with Hajia Amina Mohammed, whom he had appointed Minister of the Environment in 2015, before he also later encouraged her to take up the position of UN Deputy Secretary-General, he cut the perfect picture of a father admonishing children, young adults who thought they already knew better than their parents, the ‘old goggles.’

Incidentally, it was about 25 years to the day that we had buried my own father, a great educationist, who drew no distinction between the home and the school . He ran both with iron hand, utilizing every opportunity to teach and pass instructions. One of his favorite sayings was “young people THINK they know. Old people KNOW.”

He usually stressed the THINK and the KNOW. With the young, it was a supposition. With the old, it was definite. They ‘think’ they know. But the old people do ‘know.’

But did we accept it then? For where. The old goggles should just let us be. Till we now KNOW, having become old ourselves.

The verse of Scripture that came to my mind as the President spoke with the UN deputy scribe was 1 Corinthians 4:15. “For though ye have ten thousand instructors in Christ, yet have ye not many fathers.”

There is truly a huge difference between an instructor, a tutor, and a father. One is a hireling, procured to pass knowledge, while the other is an insider, an interested party who is “pater familias,” (as my late dad would say). All through the EndSARS protest and the riots, mayhem and looting that followed, President Buhari acted like a father. And though we have millions of instructors in this country, we have not many fathers. President Buhari is one.

The President is by no means a soft man. We remember the man of iron and steel that ruled with iron fist between January 1984 and August 1985, with his kindred spirit, Babatunde Idiagbon. They attempted to knock sense into our heads as Nigerians, but were eventually toppled by people who had less patience for discipline.

Is President Buhari as hard as he was in 1984? Yes and no. In personal traits and attributes, he remains the unbending iron. But in terms of administration and response to people and situations, he is tempered by democracy, and by time. What he could do by military fiat then, he must pass through democratic due process now. He wore khaki then, now he wears Agbada. No wonder he now talks longingly about the time “when I was young and ruthless…” Well, he is no longer young, and he must be more avuncular, even fatherly, for that is what he is. And ruthlessness has not much place in democracy , if any at all.

That was why when the EndSARS protest started, and began to fester, and was eventually hijacked and misdirected, President Buhari did not change the instructions, the rules of engagement to security agencies, particularly the police. Things began to degenerate. Policemen were being killed, prisoners being set free, roads and airports being blocked, the economy was being locked down once again after the about five months lockdown imposed by COVID-19, yet the President did not change the order to the police, particularly. It was not till last week that the Inspector General of Police instruct his men to now use ‘lawful force’ to confront any insurrection. Sadly, scores of them had been killed in cold blood, scores of patrol vehicles torched, and over 200 police stations, public and private property burnt.

If President Buhari hadn’t exercised the restraint and tolerance of a father, at a time that even hitherto respected people instigated the protesters to carry on (and they promptly went underground when anarchy ensued), we would have been talking of something else in the country. The rivers of Nigeria could have turned crimson, and mourning and lamentations would have suffused the land. But we are thankful for the father in President Buhari, patient and enduring, almost to a fault.

In his national broadcast, he said instigators of the riots misunderstood the pacifist nature of government for weakness. “We are not only in government, we are also in power,” Gen Ibrahim Babangida had said in 1993, after he annulled the free and fair presidential election of that year. If President Buhari had wanted to show that he ‘was in power,’ something quite unsavory could have happened in the land. But he rather chose to be a father. Ye have many instructors, but not many fathers.

Rather than use lawful force, the President opted to highlight what has been done for youths by this administration. The N75 billion Youth Investment Fund, under which people between the ages of 18-35 with operational businesses in the country can get up to N3 million loan for five years at just 5% interest, the raising of monthly allowance of youth corps members from N19,500 to N33,000, which is higher than the national minimum wage, the N-Power program, which 500,000 graduates had benefited from, with fresh 400,000 incoming, and many others.

The Bank of Industry oversees a $20 million fund for Youth Tech Innovators and Entrepreneurs, there is the Graduate Internship Scheme, which over 50,000 youths have benefited from, and just this Tuesday, the National Young Farmers Scheme was launched under the aegis of National Agricultural Land Development Authority (NALDA), in which 1,000 young farmers would be engaged in each of our 774 local government areas, thus creating 774,000 direct jobs annually, guaranteeing food security and creating enduring wealth. All these were unfolded to the protesting youths, but hidden hostile hands had crept in, and there was a more sinister agenda.

All the five original demands made by the legitimate protesters were accepted by government. What better display of accommodation and readiness for dialogue. But the protest was prolonged, and eventually hijacked and misdirected. But thank God for fathers, who kept their heads. No wonder it is said that what the elders see sitting down, young people would not see, even if they climbed trees.

May God continue to give this country good fathers, who remain calm in turbulence, who keep their heads when others are losing theirs. Yes, we have many tutors, many instructors, but not many fathers. President Buhari is one, and that is why the country is experiencing relative calm today.

*Adesina is Special Adviser to President Buhari on Media and Publicity