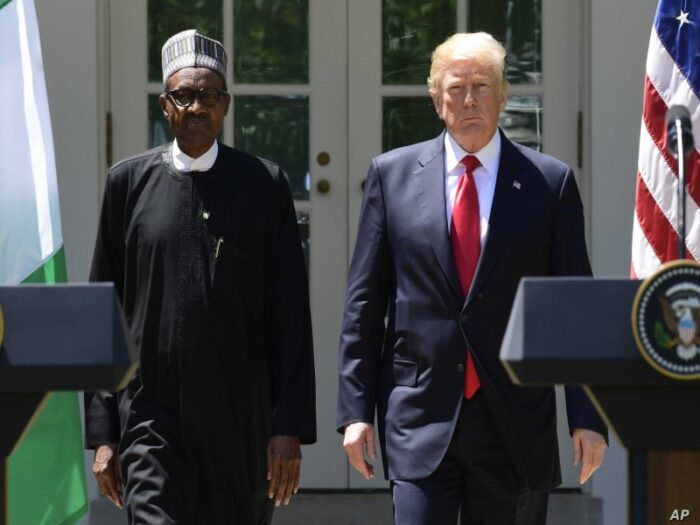 Nigerian Trumptards also defend Trump’s unprecedented nepotism and exploitation of the presidency for personal gains—in contravention of the U.S. Constitution. Trump’s employment of his daughter and her husband as his senior advisers with undeserved national security clearance has no precedent in recent American history. As I showed in a recent column, several watchdog groups have found Trump guilty of corrupt enrichment. Nigerian Trumptards said it was small potatoes.

But my revelations about the unprecedented number of Buhari’s family members who work in his government drew the fury of these same defenders of Trump’s nepotism and corruption. Apparently, for them, only Trump has the right to be nepotistic and corrupt.

When Buhari lost previous elections and perpetually complained that he was “rigged out” even though he never even campaigned outside the Muslim North and therefore couldn’t possibly have won a national mandate, he was dismissed as a sore loser by the same Nigerian Trumptards who are now defending Trump’s infantile, mendacious claims that he lost because he was cheated.

Buhari lost his second term election in 2019 but used the power of incumbency to steal it. He was roundly condemned by the same Nigerian Trumptards who are excited that Trump is refusing to concede an election he has clearly lost.

In 1985, Buhari was accused of betraying Nigeria by supporting a Hausa-speaking diplomat from Niger Republic to become Secretary General of the Organization of African Unity at the expense of a Nigerian by the name of Peter Onu.

Well, largely because of his racial animus toward Black people, Trump has also voted against Ngozi Okonjo-Iweala to become Director General of the World Trade Organization even though Okonjo-Iweala became a US citizen in 2019.

As I pointed out in my April 27, 2012 column titled, “Nigeria’s Failed World Bank Presidency Bid,” “Historically, Europeans lead the IMF and Americans lead the World Bank. That’s how it has been from the beginning. While it makes sense to demand that this undemocratic practice be stopped, it is unreasonable to let Europe lead the IMF but insist that America give up its own hold on the World Bank.”

The similarities between Trump and Buhari are almost endless. But it’s amazing what kind of self-indulgent cognitive bias causes people to condemn a vice in one person but praise it as a virtue in another.

This isn’t altogether surprising, though. Nigerian Trumptards also tend to be knee-jerk Goodluck Jonathan partisans who defended Jonathan for exactly what they criticize Buhari for. For instance, they attacked Bring Back Our Girls activists who demanded that the government rescue schoolgirls abducted by Boko Haram in April 2014. They even said the abduction never happened—or that it was staged to bring down Jonathan’s government.

But they are the most strident in condemning Buhari for Boko Haram’s February 19, 2018 abduction of more than 100 schoolgirls in Dapchi, Yobe State on Buhari’s watch.

When Jonathan signed a draconian anti-social media law before he left power in 2015, which is now being used to muzzle and try activists like Omoyele Sowore, Jonathanian-Trumptards-turned-Buhari-critics praised it as a necessity to guarantee “national security.” Now they are up in arms against the series of duplicative anti-social media bills the Buhari regime is planning on unleashing shortly.

(Jonathan’s Cybercrime Act, which he signed into law in 2015, prescribes a three-year jail term or a fine of 7 million naira or both for anyone convicted of “causing annoyance, inconvenience, danger, obstruction, insult, injury, criminal intimidation, enmity, hatred, ill will or needless anxiety to another.”)

even gaslight Nigerians by falsely claiming that Jonathan gave Nigerians “total freedom” and never murdered anyone for protesting.

What has become apparent is that Trump-supporting Buhari critics don’t criticize Buhari because of his disastrous policies; they do so because of his religious, ethnic, and regional identity. They aren’t animated by the imperatives of critical democratic citizenship; they are simply two-bit religious and ethnic bigots who hate Buhari for who he is and not for what he does or doesn’t do.

They support Trump because, in their twisted, infantile, and impoverished minds, he is the Christian messiah who has come to establish a Talibangelical theocracy in America and the rest of the world. Never mind that Trump isn’t a Christian and has deep-seated contempt for believing Christians.

In other words, Trump-loving Nigerians are Christofascists. Like Islamofascists, their only goal in life is to impose their religious beliefs on others, to merge religion and everyday life, and to close off secular spaces.

In the last few years, because of my consistently searing critiques of the Buhari regime’s frightful ineptitude, I’ve become popular with Nigerian Trumptards. But I block them on social media now because I share nothing in common with them. I criticize Buhari, as I criticized his predecessors, out of a civic obligation to hold the government accountable.

If I were as bigoted as they are, I would either ignore or vigorously defend Buhari because he and I share the same religious and regional identity. Plus, I had related personally with Buhari in the past and have personal relationships with many people who serve at the highest levels of his government.

The redemption of our world from ruin will come not from bigoted, self-interested, and situational critics of leaders but from people who transcend cheap emotions and show willingness for dispassionate examination of the ills that ail us.