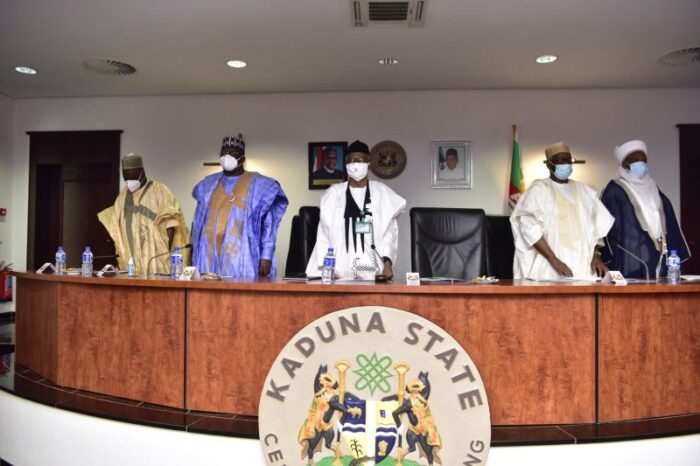 PENULTIMATE week, the governors of the 19 northern states condemned the #EndSARS movement in the country, saying that the recent#EndSARS protest championed by Nigerian youths was a ploy to actualise regime change. According to them, in protesting against years of police brutality, including extrajudicial killings, mutilations, extortions, torture and harassment, the protesters aimed to hijack the government of President Muhammadu Buhari. In a communique issued after a meeting held in in Kaduna, Kaduna State, to review the current security challenges in the country and read by its chairman and governor of Plateau, Simon Lalong, the Northern Governors Forum asked Nigerians to unite against“diabolical influencers and resist these enemies of the nation by supporting Mr President, the Federal Government and democracy at large.”

The communique added: “Forum also appeals to all citizens to restrain themselves from unwarranted disposition of sentiments, harassment and intimidation of other citizens resident in their home states. Forum notes that all these are antics of the enemies of the country who are violently pushing for regime change outside the ballot box. Forum resolve to further intensify strategic engagements among different levels of stakeholders in our respective states. Forum also notes the heavy presence of external influencers both locally and internationally and call on all citizens particularly community leaders and youth groups to be very vigilant and report the presence of such people to security agencies” In addition, the forum urged all Nigerians to see themselves as equal citizens of the country, whose unity could not be compromised. The northern governors expressed concern that the protests had persisted in spite of the ‘magnanimity’ of the Federal Government and the efforts being made at federal and state levels to put an end to the protest.

To say the least, the northern governors’ declaration was provocative and insensitive. It suggested, rather darkly, that members of the #EndSARS movement who had been campaigning to end police brutality in the country in the last three years and who conducted their advocacy with dignity, decorum

and respect for the rights of all Nigerians were actually interested in overthrowing the government of President Buhari. Pray, how can peaceful protesters take over the government? In their bid to rubbish the #EndSARS  movement simply because the brutalities of the disbanded police outfit were not witnessed in the North, the northern governors conflated peaceful protesters with the hoodlums who unleashed violence on the country after soldiers opened fire on peaceful protesters in Lekki, Lagos State. Pray, did the Nigerians who join the protests from around the world want to overthrow the government of President Buhari by protesting against police brutality? It is significant that the northern governors branded peaceful protesters as treasonable felons, yet they have not seen the need to apply such a tag to members of Boko Haram who have perpetrated the most infamous acts of terrorism in the country for over a decade, and whose professed mission is to take over the government and impose a dictatorial and lawless version of radical Islam on the country.

Indeed, no sooner had the defunct SARS been disbanded than some governors of the North began campaigning for its setting up in the North. By their logic and disposition, these governors are unmoved by the pains of Nigerians, including women who said they lost as many as three sons to the defunct police outfit in extrajudicial circumstances, simply because the victims were not northerners. We find it absolutely appalling and repellent that these governors could be promoting such a narrow-minded vision of nationhood while simultaneously asking for Nigerians to embrace unity. How can there be unity in a multi-ethnic and multi-religious state without the terms and conditions clearly spelt out? It is appalling that a grave issue such as the clamour for an end to police brutality is being reduced to another weapon of North/South dichotomy. Instructively, during the Occupy Nigeria protests of January 2012 when Nigerians not only protested against fuel price hike but also called for good governance, the individuals who spoke during the Kaduna meeting sang a different tune. At that time, they did not claim that the protests were an opportunity to hijack the government of President Goodluck Jonathan. As a matter of fact, they took part in the protests.

What evidence do the northern governors have to back up the allegation that the #EndSARS protests were aimed at removing President Buhari from office? What manner of anti-democratic forces ask for increased pay for the police so that they can discharge their duties more efficiently? If the #EndSARS campaigners were “enemies of the nation,” then why did the Buhari administration agree to their demands? Why is the National Human Rights Commission probing allegations against SARS, and what need is there for the ongoing judicial panels of inquiry in states, if their position is correct? The Northern Governors Forum should avoid making statements capable of stoking tension in the polity. The governors need to do serious soul-searching and avoid clutching at straws. The country would be the better for it.