Home Columnist Maradona: A tribute to the ‘GOAT’ @ 60 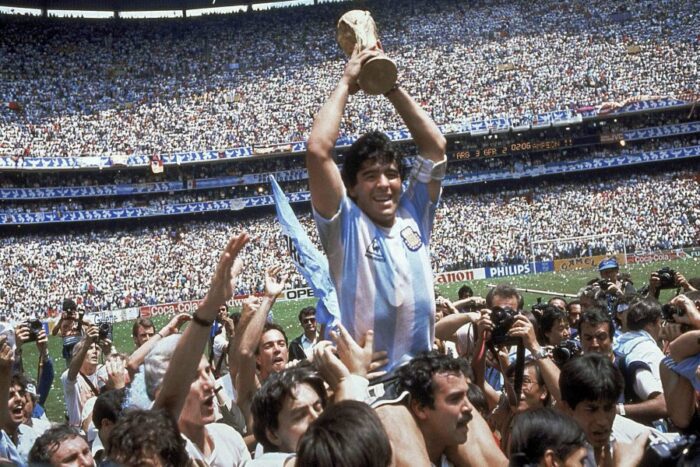 Diego Armando Maradona is 60 today. Should I talk about his football abilities or his achievements for Napoli and Argentina? He records or his lifestyle? His leadership quality on the pitch? I can’t say everything today. Hopefully this would be a series.

I promised that a few weeks to his birthday I would take my time to talk about the various aspects of Maradona but as a reporter, the #EndSARS protest in Nigeria took my time.

Many football pundits have different opinions when it comes to the greatest football player of all time. Many would say Pele. Some would mention Lionel Messi and Cristiano Ronaldo.

As for me, it is Diego Maradona. I have no doubt in my mind that he is above the rest.

Maradona turning 60 is very huge considering the fact that he has had several health challenges in the past. I thank God that he is alive today to witness what people are saying about him.

Maradona is synonymous with football. In short Jose Mourinho once said, “Maradona is football and football is Maradona.”

He did things on the field of play that no one has been able to repeat. Maradona was in a class of his own.

It is difficult to see someone as gifted as he was, playing with that zeal on the pitch. During his time, there was no protection for star players like the way there is today. Maradona suffered for the likes of Lionel Messi and Neymar to enjoy today.

Defenders went for his legs instead of the ball. While he suffered career threatening injuries at Spain when he played for Barcelona, he was brave enough to head to Italy to play in the Serie A. Then Serie A was the best league in the world. The biggest football players plied their trade in Italy. Players like Paolo Maldini, Roberto Baggio, Franco Baresi, Lother Matthaus, Andreas Bremer, Michel Platini, Jurgen Klinsmann, Michael Laudrup, Giuseppe Bergomi and many more were in Italy. 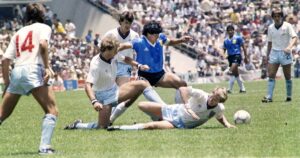 The league was also known for its brutal defenders. It was a very tough and rough league.

Of all teams in the league, Maradona joined Napoli. Napoli had never won the league title before Maraona joined. In short no club from southern Italy had won it. The usual champions were Juventus, Inter Milan, Roma and others.

When the best player in the world joined the club in Naples, football pundits thought he had gone crazy. Lol. Crazy was one of the things that made Maradona stand out.

Napoli suffered racist abuse from their northern counterparts. They use to call the city Africa because it wasn’t on par with the rest of the country in terms of development.

It was one of the things endeared the world’s greatest player to the club. It is something that is almost impossible for any great player to do today. Joining a very small club at the peak of your career.

A club that used to be in the second half of the table started to contend for the league title. 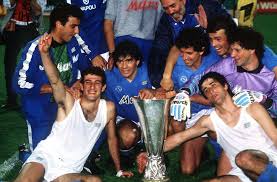 Before they won their first league trophy in 1986-1987 season, Maradona achieved what many termed impossible with Argentina. He captained an average Argentine side to win the World Cup in Mexico in 1986.

He did it by playing the best football of his life. No one gave that Argentine squad a chance. They struggled to qualify for that tournament. But when a person with Maradona’s ability decides to rise to the occasion, winning becomes the only option.

He scored five goals and assisted five goals. Argentina scored 10 goals and Maradona was involved in 10. The other four goals, he was part of the build up.

It was the game against England in the quarter finals that stood out. In the 1986 World Cup in Mexico, Argentina faced England in the quarter final. That was the first time the two teams met after the Falkland war in 1982 between the two. The build up to that game was all about the Falkland war. In fact, fans of Argentina and England clashed before that game making the atmosphere a tensed one.

In that match, Diego Maradona scored a goal with his hand (Hand of God) and five minutes later, scored a goal by sprinting from half of the football pitch with the ball on his left foot while dribbling five players including the goal keeper, Peter Shilton in the process. At the end of the game which ended 2-1 in favour of Argentina. Maradona dedicated the victory to the young men of Argentina who died in the war. 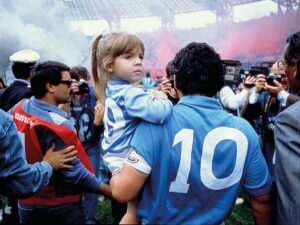 The following season he helped Napoli win their first Serie A title similar to what Leicester City did a few years ago in the English Premiership.

He later guided them to another league title and UEFA cup, with a few domestic titles. The club had never been that successful. It is 30 years since Maradona left and they have not been able to win the league title or any European cup.

Maradona’s brilliance with the ball at his feet is undisputed. His on-field exploits have resulted in him being idolised by his countrymen as well as in Napoli, where his iconic number 10 shirt has been retired in recognition of the role he played.

In his homeland he will always be remembered as the man who inspired his country to World Cup success in 1986, which remains the last time Argentina lifted the famous World Cup Trophy.

A few things some players said about Maradona:

“When Maradona ran with the ball or dribbled through the defence, he seemed to have the ball tied to his boots. I remember our early training sessions with him… the rest of the team were so amazed that they just stood and watched him. We all thought ourselves privileged to be witnesses of his genius.”

“He made you feel incredibly small because he’s got such fantastic skills. I’d never seen such things, in training or during the warm-up. Unfortunately, what us team-mates saw the crowd could not see, because during the week it was a completely different thing. ”

“Diego Maradona was not only the greatest player but also the most honest. He was a model of good behaviour on the pitch – he was respectful of everyone, from the great players down to the ordinary team members. He was always getting kicked around and he never complained – not like some of today’s strikers.”

“At first, I went along with him out of a sense of responsibility, but then I realised I was just one more spectator. I didn’t feel there was anything I could do. It was his goal and had nothing to do with the team. It was Diego’s personal adventure, one that was truly spectacular.”

“When Diego scored that second goal against us, I felt like applauding. I’d never felt like that before, but it’s true. He’s the greatest player of all time, by a long way. A genuine phenomenon.”

“With Maradona, even Arsenal could have won the World Cup.”

“The best of all time is Maradona. I admired him in the World Cups of 1986 and 1990 and the arc of his career. Today there are so many strong players such as Lionel Messi and Cristiano Ronaldo, but the things I have seen Maradona do I have never seen anyone else achieve in football history.”

“I love Messi and I would be happy if my son had one per cent of his ability, but Maradona was unique. There will never be anyone like Maradona again, not even if Messi wins three World Cups in succession or scores a bicycle kick from midfield.”

“Even if I played a million years, I will never be as great as Maradona”