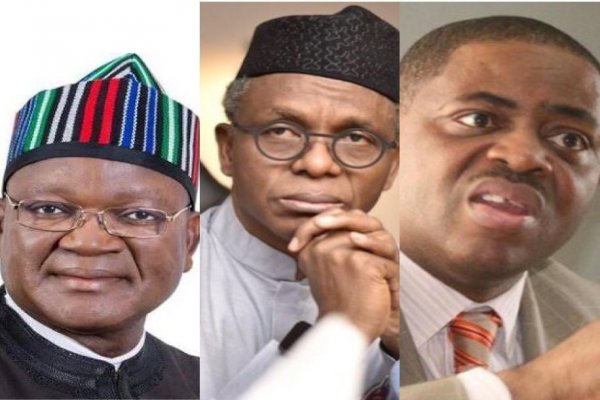 There is an abysmally low legal literacy in Nigeria. And the Nigerian political elite have discovered that they can exploit the fear and ignorance of the law in the general population to terrorize their critics into silence and self-censorship through the threats— or actual institution— of meritless lawsuits.

American defamation lawyers call this “Strategic Lawsuit Against Public Participation” (SLAPP). But I choose to call it litigious terrorism. I think that is a more evocative and fitting description than SLAPP. Litigious terrorism is the intentional intimidation, coercion, or instilling of fear in journalists and critics through frivolous lawsuits that are designed to shut down scrutiny of plaintiff’s questionable lives.

He also sued Sahara Reporters (and its owner Omoyele Sowore) for reporting on Akume’s lawsuit! The governor’s lawyer said the lawsuit against his client and its publication on news websites such as Sahara Reporters constituted “defamatory words or hate speech [sic] capable of lowering the reputations, [sic] undermine the integrity of the plaintiff, inviting disloyalty and bringing the name of the plaintiff to obloquy.”

This has to rank as by far the silliest and most ignorant lawsuit in the history of litigation worldwide. Even with the wildest stretch of the most febrile fantasy, it’s impossible to imagine a more absurd lawsuit than that.

In law, there is something called absolute privilege, which is the privilege granted to certain people in certain places to say whatever they want without legal consequences. For instance, people can’t be sued for whatever they say (however libelous it may be) while a court is in session or during National Assembly hearings.

But Mr. A’s claims don’t have to be true for him to be protected from libel lawsuit and for journalist S’s accurate reporting on what Mr. A said to be protected. The idea behind the privileges is informed by the need for untrammeled divulgence of the facts that are critical to the pursuit of truth in court cases, judicial inquiries, parliamentary proceedings, etc.

The judge before whom Ortom filed his thoughtless lawsuit would most likely remind him of the Latin legal maxim that saysde minimis no curatlex, i.e., “the law does not concern itself with trifles.”

An even more insidious litigious terrorist than Samuel Ortom is Nasiru el-Rufai who sues every critic. For instance, on August 23, Sahara Reporters reported that the Kaduna State Government sued a Kaduna bishop“for sayingGovernor El-Rufai will never be Nigeria’s president”!

I observed in an August 23 tweet that the humiliation of el-Rufai by the Nigerian Bar Association must have literally driven him stark raving mad. That was the only way I could make sense of his juvenile litigious terroristic stunt.

Opinion is protected by law. In fact, vigorous, vituperative, unflattering opinion uttered in moments of inflamed passions can’t be defamatory in Nigerian law. There are many precedents for this. For instance, in Bakare v Ishola, the defendant, in a moment of heightened emotions, said to the plaintiff in Yoruba, “Ole ni o!Elewon! Iwo ti o sese ti ewon de yi.”English translation: “You’re a thief! Ex-convict! You have just come out of prison.”

Justice C.J. Jibowu ruled that these were vulgar insults that weren’t actionable. “It is a matter of common knowledge of which this court takes judicial notice that people commonly abuse each other as a prelude to a fight and call each other ‘ole! Elewon!… which…no one takes seriously as they are words of heat and anger,” he said.

In another case, Ibeanu v Uba, the defendant was accused of defaming the plaintiff by saying in Igbo, “Josiah, Josiah, O ngi kpo ndiori bia zulu ewu m, bia malu uma n’aju m.” Translation: “Josiah, Josiah, you brought the thieves with whom you stole my goat and you have now come to ask me.” The judge in the case also ruled that this didn’t constitute defamation.

So it has been established in Nigerian law that mere “vulgar abuse” isn’t defamatory. In American media law, vulgar abuse, such as calling someone a “criminal idiot” in the heat of anger, is called rhetorical hyperbole, and is not defamatory.  Saying someone can never be president because of his vicious divisiveness isn’t even vulgar abuse or rhetorical hyperbole; it’s simply innocuous, if uncomplimentary, opinion. Only a litigious terrorist would sue anyone over that.

This is particularly interesting because el-Rufai said worse things about people in power when he was in opposition than his critics say about him now, but no one sued him. He was so proud of his vicious verbal causticity that he described himself as a “certified ruffler of feathers” on his Twitter profile.

Femi Fani-Kayode’s litigious terrorism is less outrageous than Ortom’s and el-Rufai’s but it’s no less indefensible. On September 1, for example, he sued—or threatened to sue— the Daily Trust over a scathingly unflattering opinion article that an occasional contributor to the paper’s opinion pages wrote about him.

Most of the unsparingly virulent things the writer wrote about Fani-Kayode, as I pointed out on September 1, qualify as opinion and fair comment in media law and are not actionable. The matter about which the writer wrote, i.e., Fani-Kayode’s unjustifiably primitive verbal violence against a Daily Trust reporter,had dominated the news cycle and generated intense public interest.

The only potentially libelous statement in the piece was the claim that Fani-Kayode is a drug addict who had been treated, without success, in psychiatric hospitals in Ghana (and other places) but who hasn’t recovered from his drug addiction.

That’s not an opinion that enjoys legal protection; it is a statement that implies a definitive habit of moral turpitude that can be proven to be either true or false.

Nonetheless, truth is a defense in libel. Daily Trust would be compelled to prove that Fani-Kayode was indeed a drug addict who had been treated at psychiatric hospitals.

In proving this, Daily Trust’s legal team would expose Fani-Kayode to even more public ridicule because whatever evidence they present in court, whether the evidence is false or true, would be legitimate, legally protected material for the news media.

But, even worse, if Daily Trust finally proves it, Fani-Kayode’s reputation would be so irretrievably sullied that he would become what defamation lawyers call a “libel-proof plaintiff,” that is, someone whose reputation is already so thoroughly damaged that no libelous statement can damage it further. In other words, he would inadvertently open the floodgates to everyone to thrash him in public without fear of legal consequences.

Plus, he is a public figure who seeks out the media, who willfully thrusts himself into public consciousness, who seeks to influence national conversations, and who has the capacity to respond to whatever dirt is thrown at him. Such people have a hard time winning libel cases.

Finally, in a September 28, 2019 column, I also wrote about Yemi Osinbajo who, “instead of confronting the real demons that are tormenting him… has chosen to transfer his aggression elsewhere by intimidating and overawing soft, weak targets….

“He is now on a wildly frivolous litigation spree. As of the time of writing this column, he has sued—or has threatened to sue—’one Timi Frank and another Katch Ononuju’ whom he said have ‘put their names to’ what he said are ‘odious falsehoods’ against him. He also threatened to sue RootsTV and Google over a YouTube video he said injured his reputation.”

As is obvious by now, litigious terrorists are cowards who derive strength from intimidating weaker targets and who treasure the privileges of being in the public eye but chafe at the scrutiny that comes with it.