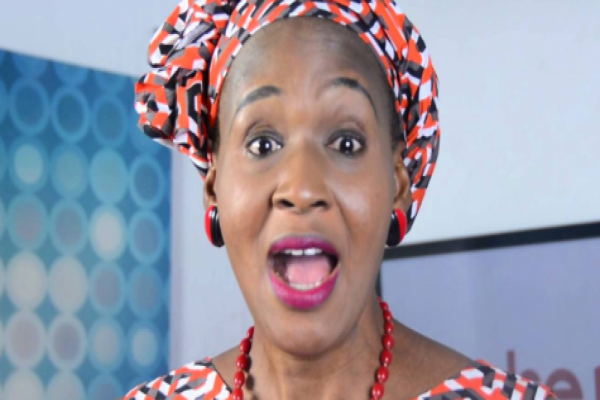 Controversial journalist, Kemi Olunloyo, has come under fire from Nigerians for rubbishing the #EndSARS protest that is going in Lagos State some other parts of Nigeria.

In a tweet she made on her official handle, on Friday, she revealed that most of the young men who are campaigning against the Special Anti-Robbery Squad, (SARS) are armed robbers themselves.

According to the controversial journalist, SARS will not be banned or dissolved as requested but only reformed.

She tweeted: “Most of the Nigerian youth protesting #endsars are armed robbers themselves. They have stolen something in their youth or done something illegal.

Senate President Lawan is not buying the idea. We are not ending SARS, we are reforming it.”

A tweeter  user with the handle @kinglamarrr__ wrote “Can Kemi Olunloyo shut up already ffs.
Her tweets irks me, how can someone be so dumb and insensitive.”

Another one @Kosi_nnebe said, “Our first mistake is letting Buhari become President TWICE!
Our second mistake is giving Kemi Olunloyo the impression that anyone slightly gives a hoot about her and her opinion.”

Azeez Olajide with the handle @zeezish_ tweeted: “Kemi Olunloyo is another clear example that one can use almost 60yrs in life and still be dumb and stupid.” 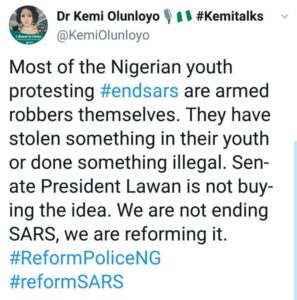