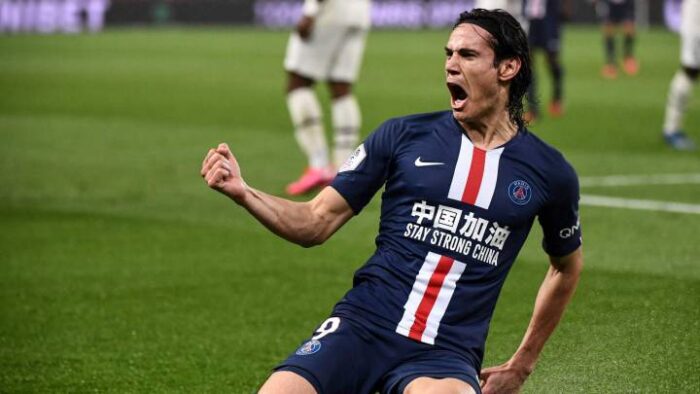 The 33-year-old Uruguay international, who left PSG at the end of June, has signed a one-year contract.

One of his first United games could come against PSG in the Champions League group match on 20 October.

Before that, United face Newcastle United in the Premier League on 17 October, the first game after the international break.

Ole Gunnar Solskjaer’s side are 16th in the table, having picked up only three points from their opening three league matches.

They were thrashed 6-1 at home by Tottenham on Sunday.

“Manchester United is one of the greatest clubs in the world, so it is a real honour to be here,” said Cavani. “I’ve worked really hard during the time off and I feel eager to compete and represent this incredible club.

“I have played in front of some of the most passionate supporters in football during my career and I know that it will be the same in Manchester. I cannot wait to experience the Old Trafford atmosphere, when it is safe for the fans to return.

“I look forward to continuing to write my little story inside the book of football and I know that’s why my focus has to remain the same as always – work, work, work. I have had a conversation with the manager and this has increased my desire to wear this beautiful shirt.”

It is understood that the wage package for Cavani does not go beyond the pay structure at the club.

Cavani left PSG under a cloud following a disagreement with forward Neymar and feels he has more to give to European football.

United boss Solskjaer said the striker was an “experienced ultimate professional who always gives everything for his team”.

“His goalscoring record for club and country is fantastic and we are delighted to sign a player of his calibre,” he added.

“He’ll bring energy, power, leadership and a great mentality to the squad but, most importantly, he’ll bring goals.

“He has had a brilliant career so far, winning trophies at almost every club he has played for, and he still has so much more to give at the highest level.

“The opportunity for our young players to learn from one of Europe’s top goalscorers over the last 10 years is fantastic and it will really benefit them going forward.”

He is not the first high-profile European striker in his 30s United have signed in the hope of extending their goalscoring prowess.

Cavani, who has the option to extend his contract by a year, will provide an experienced forward option for United and competition for younger forwards Anthony Martial, Marcus Rashford and Mason Greenwood.