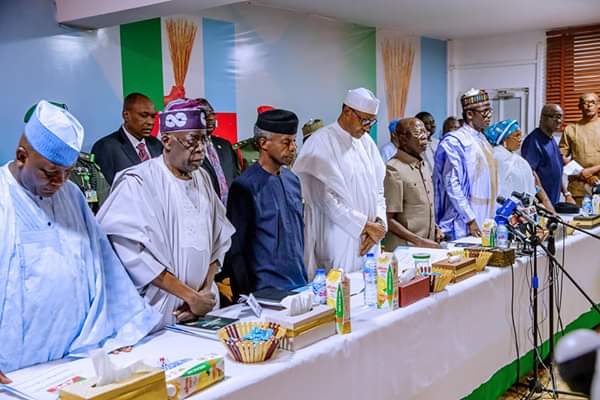 There is a law called Dude’s Law of Duality. It states that of two possible events only the undesired one often occurs. The members of the National Working Committee of the ruling party, APC, led by the Chairman, Comrade Adams Oshiomhole did not reckon with the possible manifestation of that law in their political life. Things were going haywire; the hard fist of fear was hitting their partymen as the body blows were landing viciously. Some of their followers were worried about the terrible prospect of their party falling apart because the tension, the anxiety, the uncertainty had reached a flash point. You could cut the tension with a knife. All sorts of cases were going on in all sorts of courts in places far and near that were capable of showing the stark nakedness of the ruling party with all its ugly bulges here and there. They stayed paralyzed, frozen, unable to feel or fret about the escalating tension nationwide.

Instead, they engaged in the self-protective habit of issuing inane statements on who was or should be in charge of the shop. They were not even worried about the situation or of what we thought they were doing. They simply thought there was no problem or if there was one it would sort itself out. They were no problem solvers otherwise they would have noticed that the mess had become messier by the day and that something definitive needed to be done and done quickly to arrest the drift. They had lost control. They were like the driver who was sleeping on the steering while the car was rolling to the deep valley below.

The passengers were shouting that the vehicle was on its way to hell but the driver did not hear because he was sleeping on duty. If he heard it, he did nothing, absolutely nothing, to halt the speed of the car that was heading for hell. The passengers felt a sudden chill in their bones. They asked the NWC to call a meeting of the National Executive Council (NEC), the ultimate decision-making body of the party. The NWC scoffed at the idea and simply shredded it and put the pieces in the trash can. They thought that they had the wherewithal to win the roforofo fight handily by generating chaos in various courts and in the media, social and mainstream. Meanwhile, INEC which has the responsibility for conducting two important off season governorship elections in Edo and Ondo States, both of them APC controlled, was worried stiff by the chaos of multiple and obstructive litigations.

In obvious desperation INEC appealed to the Nigerian Bar Association, NBA, and the Judiciary to put a brake to the madness of litigious licentiousness. It feared that if this litigation Olympics continued there was the clear and impending danger of the truncation of the election schedules in one or two of the states. This had the possibility of birthing a constitutional crisis that nobody could fathom how it would end. But the NWC folks had boxed themselves into a corner, not just a corner but a cul de sac from which they needed to be rescued. Because of their Cassius-like appetite for power for themselves and their sponsors and cronies they failed to feel the niggling guilt of their inadequacy and incompetence in the management of a national institution of transformational importance. Their party was at the precipice of disgrace and they acted as if they did not care or if it did not matter. By some strange, inexplicable, fault-chasing formula, they combed everywhere and managed to find enough reasons, convincing or not, to disqualify their own sitting Governor, Godwin Obaseki of Edo State to whom they had given their mandate to fly their flag with the same credentials in 2016.

It did not occur to them that it is easier for a party to lose a state in a governorship election than to get it from a Governor who has several achievements to flaunt from his first term. When Obaseki showcases his achievements in the first four years what will Ize-Iyamu display? Mr. Obaseki walked into the warm embrace of the opposition party, PDP and got its nod for the election. All over the media Oshiomhole’s flowery and furious recommendations of Obaseki in 2016 are on display. Also his toxic remarks on Osagie Ize-Iyamu who has now been picked as the APC governorship candidate are fully on display in various media. Maybe Oshiomhole will now eat his words or his voice on Obaseki and Ize-Iyamu or say that he was quoted out of context or that he made a mistake or that he told a lie and he should be forgiven. In the Nigeria’s political firmament anything, almost anything, is possible.

In fact, it is possible that his gangmen will swear on the Holy Bible and the Holy Qur’an that Oshiomhole never said those words ascribed to him and that it is his enemies who are putting their words in his mouth through computer manipulation. Truth-telling will remain a major problem in Nigeria’s politics and governance. On Edo, the jury is still out, but in a few months time we will know whether the Edo pregnancy will produce one baby or twins, or triplets or quadruplets and who the father of the baby or babies is. While all these political flips and flops were going on, insecurity was mounting, people were being killed or kidnapped and COVID-19 was taking its deadly toll on Nigerians, eminent and anonymous. President Muhammadu Buhari must have felt an obsessive sense of many things going wrong. Like a breeze from a new direction he said he would attend a meeting of the National Executive Council (NEC) of the ruling party which was called by Victor Giadom who was waving a court verdict in everybody’s face. He nearly pasted it on his forehead to demonstrate that he was now the authentic Acting Chairman of the party and therefore had the right to summon a meeting of the apex body.

There were some shrill voices from the NWC telling the world that Mr. Giadom had no authority to call the meeting, that he had been suspended or something to that effete effect. In their act of unmatchable meanness they even called him a Victor Giadom as if he never existed in their universe. That meeting turned out to be the game changer. Attended by President Buhari, Vice President Yemi Osinbajo, 16 State Governors and virtually all the party chairmen and leaders of the National Assembly it had the imprimatur of real power whether it was validly convened or not. It was a coup of sorts and once it succeeded it had de facto powers of the party in its firm hands. The NEC sacked the fumbling NWC, set up a Caretaker Committee and asked it to work for the mounting of a convention within six months. When I heard some noises to the effect that the decisions would be challenged in court by the sacked NWC I knew that even if they were legally right in power dynamics they would be merely tilting at windmills. Besides, it is arguable whether if push came to shove they would, one and all, pass the acid test of close scrutiny. Buhari was pragmatically right in making that last-ditch effort to save the NWC from itself and the party from the NWC.

The NWC had become a source of pain to itself and the party. Some kind of gangrene was eating it up and this was the first and crucial stage in its mortification. Beyond that stage the party would have become holistically gangrenous and this would have led if not to its death, at least to its amputation or something like that. Even if Buhari was legally wrong he was pragmatically right; it was better for his party if he was legally wrong but pragmatically right because that seemed to be the only way of taking the party away from the top of the keg of gunpowder on which it was sitting. It could have exploded if he had waited a little longer.

So he was right to be wrong. If you look at the big picture of the APC crisis and by extension the problem of Nigeria’s failure to become a strong, resilient and egalitarian nation of significance, you can trace it to what Max Weber called Prebendalism. Before 1915 and 1916 Weber had written two books titled The Religion of China and The Religion of India. The books were about temple workers and whether or not they ought to eat from the temple. This is what in political terms can be called patron-clientelism.

Professor Richard Joseph, the director of the Programme of African Studies at Northwestern University in the United States has used the term prebendalism in his studies and writings on Nigeria’s governance culture. Prebendalism, the mindless and aggressive acquisition of public resources for one’s private use or the use of cronies and supporters is a Nigerian disease. This is what leads to another disease called godfatherism. Godfatherism hobbles transparency, encourages corruption, distorts development vision and causes internecine conflicts within parties and governments. The godfather never sleeps; he stays awake, superintending over the affairs of successor-governments for his own illicit purpose. Eventhough he is not directly working in the temple anymore he wants to continue to eat from the temple. And because this feeling is the product of avarice and the consuming desire to stay as the major fulcrum of power it becomes a disruptive obsession. Politics is an algorithm of complex calculations but in Nigeria’s political matrix the godfather complex is the dominant ethos. That is why a governor would be removed from office because he is a bad partyman eventhough he is a good governor. That is Nigeria’s serpentine theory of governance which the APC’s NWC and their sponsors or gangmen wanted to perpetuate until Buhari pulled the plug.