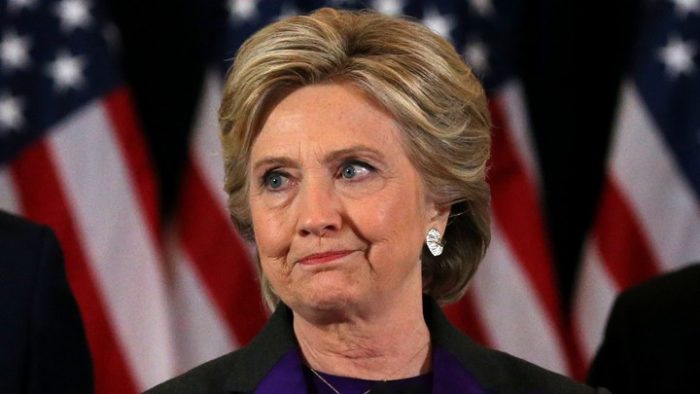 Hillary Clinton continues to hover in the wings, ready to step forward should Joe Biden fail.

Don’t look now, but Joe is failing. Not only has his campaign been rocked by sexual assault allegations from one-time staffer Tara Reade, but the public is beginning to give up on the former vice president. A new Emerson College poll showed 57 percent of likely voters think President Trump will win reelection in November.

That’s not the only problem that crops up in the Emerson Poll. It also shows Trump supporters 19 points more enthusiastic about their candidate than Biden supporters. That “enthusiasm gap” will drive turnout this fall. With Democrats dependent on young people and minorities, both typically less reliable voters, that lack of excitement for the candidate could be a big problem.

Also less than gung-ho about Biden is, predictably, Bernie Sanders’s army. Though the Vermont socialist has endorsed Biden, 51 percent of Bernie supporters are, according to Emerson, open to voting for a third-party candidate.

Another red flag is Biden’s tepid fund-raising; according to the New York Times, Trump has a monster cash advantage of $187 million. Further, in swing-state polling, the presumptive Democratic nominee is running behind where Hillary Clinton stood at this point in the race, and we know how that turned out.

As all of those issues cast doubt on Biden’s prospects, the presumptive nominee must now fend off Tara Reade’s allegations, which put #MeToo-supporting Democrats into an incredibly awkward spot.

None of this augurs well for the Biden campaign, which will likely confront further obstacles in the months ahead. Eventually, the coronavirus will no longer excuse the former VP’s invisibility; he will have to engage in the kind of give-and-take that often shows him getting befuddled, including real – not scripted – town halls and interviews.

At that point, the public will see what numerous Democrats have noted sotto voce – Obama’s former wing-man is struggling with some cognitive decline.

We really cannot elect a president who mixes up his sister with his wife or who collapses in mid-sentence, unsure of where he’s going next.

Democrats’ obstacle to pushing Biden aside is Bernie Sanders. The Vermont senator was the runner-up in the primaries, and continues to hold onto his delegates. Democratic leaders do not want to see Sanders resurgent; they are convinced he is unelectable. But they also know that if they move to replace Biden at the top of the ticket, and don’t elevate Sanders, the Bernie Bros would revolt.

Indeed, it seems clear that party officials are so worried Sanders might stage another run that they cancelled the 224-delegate rich New York State primary. They claimed the vote would have been dangerous in that epicenter of COVID-19, but since they still plan to host a primary for state and local officials, that excuse seems weak.

As the primaries roll forward, and especially with officials’ thumbs on the scales, Biden will almost certainly win the candidacy. In the absence of a brokered convention, how could Democrats replace their standard-bearer?

One idea has been to convince Biden to step aside in favor of the very popular Michelle Obama, seen as a sure bet to beat Trump. So far, though, the former first lady has reportedly rebuffed all invitations to enter the fray.

That leaves Hillary Clinton. Biden could choose Clinton as his running mate, and then step down before the election and allow Hillary to run in his place.

Clinton is the only VP candidate who would be able to pull off such a last-minute switch. She has the team, the resources and the experience to be the nominee; Sen. Amy Klobuchar (D-Minn.), former Georgia state Rep. Stacey Abrams and Sen. Kamala Harris (D-Calif.) do not.

Clinton is ready and eager. She is desperate to avenge her 2016 loss (which she still blames on Putin) and has pumped up her public profile to keep herself in consideration. In past months she has conducted endless interviews, promoted the uber-flattering four-part Hulu film about herself, made headlines by attacking Bernie Sanders and Mark Zuckerberg, and fired unending broadsides against President Trump.

Most recently, she joined Vice President Biden in a town hall devoted to women’s issues, during which she effusively endorsed her long-time colleague. She reminisced about their time together in the Obama administration, talked about their mutual love of Scranton, Pa., where her father grew up, and recalled meetings in the Situation Room.

In fact, Clinton talked so much about their shared history that it was easy to forget that she was endorsing Joe Biden. It almost sounded as though she were touting her own resume instead.

How would Hillary stack up as a nominee this time around? Hillary certainly looks stronger and more fired-up than Biden; she has the energy he lacks. She has a bigger following on social media (28 million Twitter followers, compared to 5 million, for instance) and she has a large devoted following who, like Hillary, still cannot believe she lost in 2016.

She could count on President Obama to campaign for her, as Biden also can, and she would also have ever-popular husband Bill helping out. In 2016, Democrats were not wildly excited about her candidacy, but her “enthusiasm” readings were better than Biden’s today. As was her polling in critical battleground states.

Hillary is hideously polarizing, but she would be a more forceful nominee than Biden, has enormous name recognition and, perhaps most important, can begin and end a sentence without major detours. And, she has not been credibly accused of sexual assault.

Hillary may be Democrats’ nominee of last resort. You know she wants it.