Home Columnist What does a Chief of Staff really do? – By Obadiah Mailafia 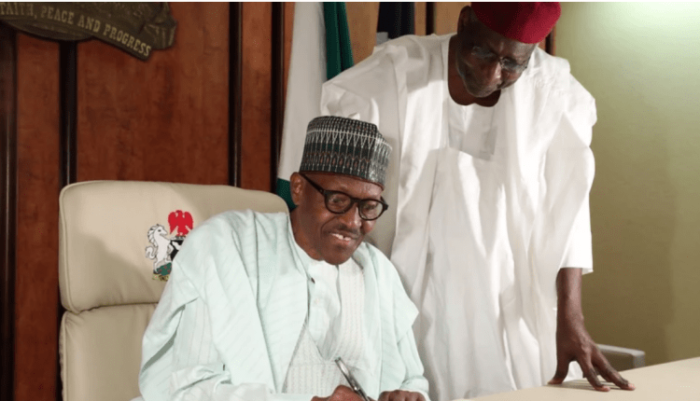 Sometime last year, I had the honour of being received by Abba Kyari, the larger-than-life Chief of Staff to the President, Major General Muhammadu Buhari (retd.). His office was neat and well-organised; the furnishing in the classic Nordic minimalist style. Sitting next to me on the sofa, he softly asked if I needed coffee or any other drink. I graciously declined.

Kyari the private man was the opposite of the ruthless Machiavellian character that has been portrayed by the media. I found him to be quite taciturn; speaking in quiet, elliptic monosyllables. But his eyes had the gaze of a millenarian mystic. With the gravitas of a Roman proconsul, his courtliness would have impressed the mandarins of imperial China. I have met some world statesmen in my life-time, from Henry Kissinger to Tony Blair, Benjamin Netanyahu and a gaggle of African strongmen. Abba Kyari had the presence of the consummate man of power.

Kyari succumbed to COVID-19 on Friday, April 17, and was buried the following day at Gudu Cemetery in Abuja, in accordance with Muslim rites.

After his return from an official trip to Germany on March 14, he had announced to the world on March 19 that he had tested positive for COVID-19. Before his trip to Germany, a leaked memo from the National Security Adviser, General Babagana Monguno, accused him of usurping the powers of the President and interfering in security and military affairs outside his sphere of competency. It caused great embarrassment to the administration. Rumours transpired that he had actually been fired.

The office of the Chief of Staff is largely an American invention. In 1939, President Franklin Roosevelt named one of his trusted advisers as Chief of Staff. It has endured as a tradition of American government ever since. It’s a relatively new thing in Nigerian government. In 1999, President Olusegun Obasanjo broke with tradition by appointing his Chief of Staff, Major General Abdullahi Mohammed, a retired military intelligence officer.  Mohammed was the quintessential insider who operated with a high level of discretion.

Obasanjo’s successor, Umaru Yar’Adua, abolished that office, instead, operating through a network of his own Katsina kinsmen. When Umaru succumbed to illness in May 2010, he was succeeded by Goodluck Jonathan who decided to name a new Chief of Staff in the person of Mike Ogiadomhe. The latter resigned to contest an election and was replaced by Jones Arogbofa.

When Buhari won the election in 2015, he made Abba Kyari, a Shuwa Arab from Maiduguri, his new Chief of Staff. He kept him when he won a second term in 2019. A sociologist, lawyer, banker and journalist, the Cambridge and Harvard educated Kyari had the necessary training and background to serve as trusted adviser and jurisconsult to the President.

The Chief of Staff is an appointee of the President. His role is to manage the office of the high executive while coordinating his programmes and the core agencies needed to run the administration. He also serves as the principal channel of communication between the President and his core officials, including the Federal Executive Council. He also ensures that the engagements of the President, including the presidential fleet, operate in a flawless manner.

I have been a Chief of Staff myself, but in a different context. During 2010-2015, I was Chef de Cabinet of the 79-member intergovernmental organisation, the African, Caribbean and Pacific Group based in Brussels. My principal was Mohamed Ibn Chambas, former President of the ECOWAS Commission and currently UN Secretary-General’s Special Representatives for West Africa and the Sahel (UNOWAS). It was for me a great experience.

Being Chief of Staff is certainly not a job for the fainthearted. You have to be a technocrat who understands technical economics and the minutiae of international trade and high finance. But you must also be a hands-on administrator with a nose for power and diplomacy. It is a 24-hour job in which you must be alert always. It requires patience, high ability, energy, discretion and tact. But you must also be tough. You must be ready to swim with the sharks and graze with the bulls.

Abba Kyari was the most powerful Chief of Staff our country has ever known. Given the illness and prolonged absences of his principal, he quietly accumulated considerable power to himself. Some have called him the de facto Prime Minister. They would not be far wrong. He undoubtedly stepped on many toes in the course of the performance of his duties, not least of all the ferocious First Lady who fought an open battle with the men she described as “the cabal”.

It is for posterity to judge whether Abba Kyari was an effective Chief of Staff or not – and whether he truly served his principal faithfully or merely for his own self-aggrandisement. One thing that cannot be taken away from him is the fact that he was uncompromisingly loyal to President Buhari.  Like Rasputin, he never wasted an opportunity to amass ever greater and greater power and the accoutrements that went with it. One of the cardinal laws of power as indeed of physics is that nature abhors a vacuum. Abba identified many vacuums in our system of power and he quietly covered the empty spaces like a colossus.

If he had had a more enlightened mind, he would have used such enormous power to uplift our country from its current morass. His friends and associates maintain that he had “socialist” leanings, whatever that means. From all we know, his political philosophy was anchored on the maxims of power.

I did not know him well enough and certainly do not have enough data to determine whether, like Caesar’s wife, he was beyond reproach. What I know for sure is that the downward spiral in our development prospects and the descent of our country into a lawless, violent and nihilistic society under his very watch does not speak well for him.

His inordinate obsession with power and his overweening ambition meant that the wheel and machinery of government was totally centralised under him. Nothing of importance could be done without reference to him. He had, in effect, become an octopus. The administration became paralysed as a consequence. Whenever he was absent or indisposed, almost everything grounded to a halt. Ministers spoke about him in whispers. He became a shadow that was bitterly loathed and feared in equal measure. Even the most powerful ministers trembled at the mention of his name. He had obviously made the existential choice to be feared rather than loved.

But the venomous vituperation on social media is unnecessary. Abba Kyari has been compared to the Roman Emperor Caligula and the corrupt Cardinal Richelieu, first minister under Louis XIII of France. Some of his critics point to the fact that it is a year almost to the day since himself and Aliyu Umar SAN orchestrated the ouster of Chief Justice William Onnoghen from the Supreme Court. Onnoghen lamented that God was his only hope and refuge. Both Kyari and Umar died, incidentally, on April 17, 2020, almost a year to the day.

No man is wholly a saint or wholly a villain. A professor from Maiduguri recently revealed that, for more than a decade, Abba Kyari had channelled his hard-earned savings for the care of 1,000 indigent citizens of Borno State, on condition of the strictest anonymity.

The priests used to exclaim, “Sic transit gloria mundi” (thus passes away the glory of the world) during the medieval coronation of the popes. Vanity of vanities, says the Preacher. What we must learn is that all power is transient. It is only the good we do for others – acts of lovingkindness and righteousness in service to God and humanity -that will live forever.