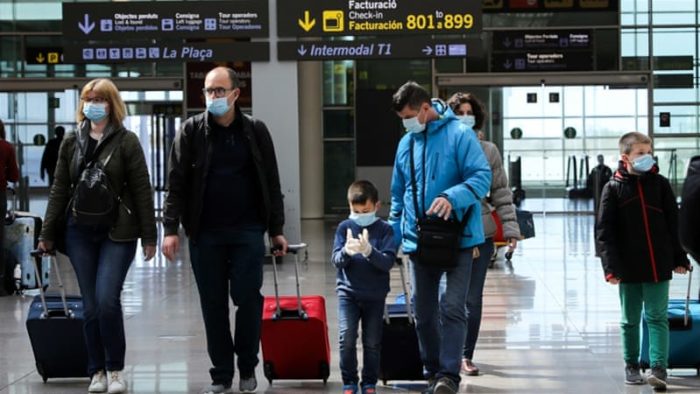 The growth in coronavirus cases in hard-hit Spain appears to be slowing, the country’s foreign minister has told the BBC.

Another 6,400 cases were confirmed on Monday, the lowest increase in new cases for a week. The total of deaths reached 7,340 after 812 new fatalities.

It comes as a national lockdown expanded to instruct non-essential workers to stay home for two weeks.

Meanwhile, the doctor leading Spain’s response to the outbreak has tested positive.

What’s the latest in Spain?

Officials are hoping that the peak of the virus outbreak there is approaching, after which new cases and deaths are expected to decrease.

Catalonia, the Basque region and capital Madrid remain some of hardest-hit areas.

A near total lockdown to contain the virus has been in place since 14 March, with residents only allowed to leave their homes for work, essential food and medicine purchases, or to care for relatives.

Health official Maria Jose Sierra said that following the introduction of restrictions, the trend in daily infections had changed. New cases are rising at about 12% a day, compared with 20% before 25 March.

A stricter ban on all “non-essential” activities is now in place until 9 April.

The foreign minister also told the BBC that pressure on intensive care units continues to be Spain’s biggest challenge, and that new restrictions being imposed today will help to contain the spread.

Ms González said it was unfair to single out Spain because many other countries – including Italy and the US – were also dealing with unprecedented numbers.