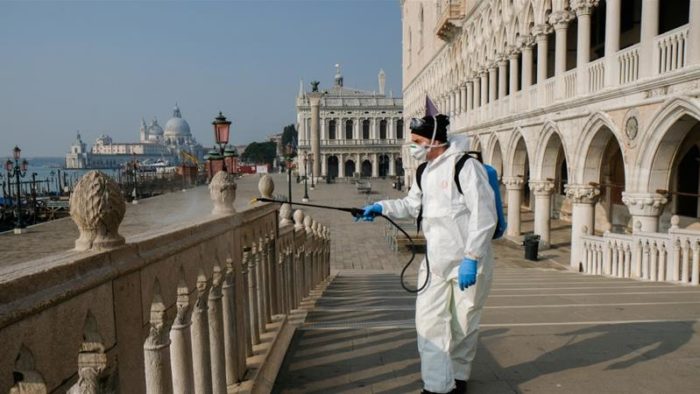 Italy on Monday reported 812 new deaths from the novel coronavirus, bringing the total number of victims to 11,591, still the highest in the world.

However, the latest figures provided by the Italian Civil Protection Department showed a clear slowdown in the number of new contagions, which grew by only 2% to reach 75,528 — the lowest percentage since the beginning of the outbreak.

The epicenter of the Italian outbreak remains the northern Lombardy region, which alone counts 6,818 victims.

Doctors and nurses working on the frontline are among those who paid the highest toll from the epidemic, with at least 63 deaths among the health staff so far, and an average of 600 new infections every day.

Italian experts say the outbreak has not yet peaked in the country, but is approaching that point.

The government is expected to approve a new decree by the beginning of April that will likely extend ongoing lockdown measures for at least another two weeks.

Risking social unrest due to the almost-total lockdown, the government rushed on Saturday to provide local administrators with €400 million ($441 million) for food vouchers and economic aid for the poorest in their regions.

This sum will be made available to mayors alongside expected funds from the central government worth €4.3 billion.

Workers in the country’s vast underground economy have been hit hard by the COVID-19 outbreak and the following lockdown, as they are unable to work and are not eligible for state support.

As a result, discontent and social tensions are simmering, especially in some southern regions where police are now patrolling supermarkets following a series of looting episodes.

According to Coldiretti, Italy’s farmers’ association, there were around 2.7 million people who need help buying food in Italy. Most of them live in the southern regions, especially Campania, Sicily and Calabria.

Italian authorities are also concerned that organized crime could exploit the economic crisis due to the pandemic and expand its presence in the poorest territories.

After first appearing in Wuhan, China, last December, the novel coronavirus has spread to at least 177 countries and territories, according to data compiled by U.S.-based Johns Hopkins University.

The data shows more than 745,300 cases have been reported worldwide since last December, with the death toll over 35,300 and nearly 157,000 recoveries.