Home Columnist Oshiomhole: The emperor with no clothes – By Tayo Oke 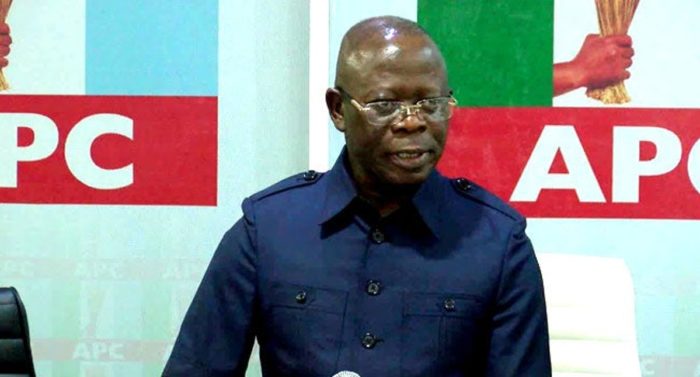 Adams Aliyu Oshiomhole, former leader of Nigeria Labour Congress, former Governor of Edo State (2008-2016), and current National Chairman, All Progressives Congress, the ruling party, was not born with the proverbial silver spoon in his mouth. He came out of the womb and almost immediately started struggling to walk before he could crawl.  Tough as old boots, he is as dogged as a prize fighter who never knows when he is beaten.

A rebel without a permanent cause, he leads, joins, supports, encourages, fights for the oppressed, and wretched of the earth anywhere, almost as a hobby. A man who has had greatness thrust upon him from an early age. Despite this, his story is replete with such tragic irony that he becomes a man of the moment today because he has failed to understand the essence of the one thing he has been all his adult life; leadership.

Oshiomhole  is always a man with good intentions, but he stays imprisoned in his own puritanical mindset. He is a man who refused to quit when the ovation was loudest; a garrison commander whose troops (unbeknown to him), had long deserted him as he barked orders from his heavily fortified saddle; a latter day Emperor with no clothes.

All politics is local. So says, Tip O’Neill, former Speaker of the United States House of Representatives (1977-1987). It appears Oshiomhole has not heeded this aphorism well enough in his current battle with his electorate at the local level. They have suspended him from party membership since November 2019, following a vote of no confidence in him by 18 local government chairmen. Seeing this as an affront to democracy, he organised a fight back by waging war on his “enemies” locally and nationwide. But, by January 15 of this year, the APC in Edo State reaffirmed the suspension, which was followed up by the High Court in Abuja granting an “interlocutory injunction” (i.e. temporary) ban on Oshiomhole from acting as Chairman of the APC nationally.

This, of course, was premised on him having been suspended by his party at the local level. Oshiomhole, however, did not arrive at the summit of the APC by lying low and letting others push him around. His lawyers swung into action, rushed to a different Federal High Court in Kano to apply for and secure a separate injunction nullifying his suspension. That action now leads to an impasse at the judiciary because one High Court cannot overrule another since they are of equal standing. The impasse is being broken by a shrewd application of superior judicial wisdom as you read.

Oshiomhole is particularly peeved by the fact that his election to the top of the APC, secured by several thousand delegates at the party’s convention in 2018, plus backing from several state governors, VIPs, and President Buhari, could be so casually tossed off by some local busybodies and malcontents in his own yard. How messy this thing called democracy can be?

Looking at it from a distance, one would have some sympathy for Oshiomhole. Tyranny of the majority can be just as bad as the tyranny of the minority. In politics, however, tyranny of the minority is nigh impossible without the acquiescence of the majority. He took his eyes off the ball by not dousing the fire in his backyard on sight. He had assumed the mantle of leadership of the APC like a man on a mission; to exert the supremacy of the party across the board, just like he had observed in the UK party politics during his days studying economics and industrial relations at Ruskin College, Oxford – the trade union leaders’ citadel of learning.

Ruskin is a college within the world-famous Oxford University, United Kingdom, which is designated for the academic training and moulding of individuals with leadership qualities within the Labour movement – individuals who had otherwise missed out on conventional education earlier on. The Oxford University as a whole is a breeding ground for world leaders. Ruskin College is a part and parcel of that milieu of self-confident, self-assured, future masters of the universe. Oshiomhole, no doubt, caught the bug.

Armed with his academic training and exposure to the world far and wide, he set his sight on making a difference in the lives of ordinary citizens at home through unionism. It was not too long, therefore, until he became leader of the Nigeria Labour Congress. His calling as a ‘leader’ of men had now been firmly cemented. His rise to the top at the NLC coincided with the emergence of General Olusegun Obasanjo as President in 1999. His days as General Secretary of the National Union of Textile Garment and Tailoring Workers of Nigeria in 1982 had prepared him well for the numerous battles he later fought on behalf of Nigerian working men and women.

Oshiomhole had, indeed, become a full-time union organiser since 1975. He challenged President Obasanjo and negotiated a 25 per cent wage increase for public sector workers and confronted the government over an increase in fuel prices, giving the Obasanjo administration several ultimatums and leading his troops out on strikes as and when the occasion demanded. He was a man who, at the peak of his union power, veered into partisan politics, getting elected Governor of Edo State under the banner of the defunct Action Congress (the forerunner of APC) and served two terms between 2008 and 2016. Could Oshiomhole have bowed out of partisan politics after this? No, “comrade” Oshiomhole, man of the people, had one more dragon to slay. In his mind, the APC had become too unruly and timid in the way it handled its elected members, especially, the way it failed to exert party discipline on APC members of the National Assembly, following the victory of the party at the polls in 2015.

In another twist, Oshiomhole’s marriage to the beauty queen, Iara Fortes, from Cape Verde, in 2015, before becoming National Chairman of the APC, was met with bemusement by many of his friends. It robbed him of the “man of the people” image he had so carefully cultivated and nurtured for decades. Man of the people apparently displaying an exotic taste in women jolted them a little. But, it needs to be pointed out that the late Tai (man of the people) Solarin actually married someone outside his race entirely, who later accomplished far greater things than any local bride could have achieved in a lifetime of commitment and dedication to Nigeria. There are numerous other positive examples. Donald Trump’s marriage to the Czech super model has not dented his stratospheric popularity among the Republicans. Anyway, in his bid to exert “party supremacy”, Oshiomhole stirred the hornets’ nest believing he alone had the leadership skill within the party to do so. He was wrong. He had walked on water as an effective union leader, but could not prove he could walk on dry land as a party leader.

Oshiomhole can be rather contemptuous of colleagues who would not see politics in black and white as he often does. He sees himself as an enforcer of order and discipline that the union leader in him would not accept from the establishment when he was on the other side of the fence. This poacher turned game keeper is, himself, about to be thrown to the wolves. Remember, politics is still a blood sport in this part of the world.