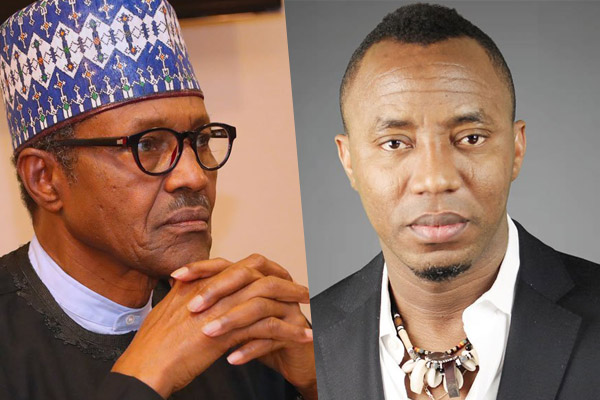 Minutes before I started writing this column, I watched disturbing videos showing officers of Nigeria’s anarchic DSS physically assaulting Omoyele Sowore in the process of illegally re-arresting him after a judge had ordered, for the umpteenth time, that he and Olawale Bakare be released from detention. The brave judge was also scared away by gunshots.The videos emblematize Nigeria’s descent into the very nadir of fascistic absolutism. Buhari’s monocratic excesses are turning out to be more toxic than I had feared.

Before he was violently rearrested, Sowore said on camera that operatives of the DSS had told him he would never leave their gulag alive if he didn’t compromise. They want to murder him for demanding that the systemic dysfunction in Nigeria that holds vast swathes of people down be radically overhauled so that the country can work for everyone, not just a criminally and undeservedly favored minority.

Will Nigerians and the world watch idly while Buhari’s agents murder a man who committed no crime? Why is there no groundswell of national rage toward the unjustified criminalization of Sowore by a government that mollycoddles murderous Boko Haram terrorists, that “de-radicalizes” and “integrates” captured terrorists into the military who then cause the mass slaughters of our military men? 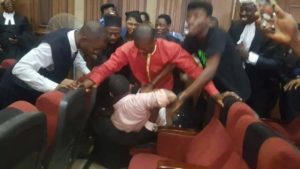 I know why. It’s because Sowore is an equal-opportunity tormentor of oppressors. Goodluck Jonathan sympathizers are as angry with him as Muhammadu Buhari supporters are. And since there are numerically insignificant people in the middle, that is, who are neither Jonathanians nor Buharists, he is left in the lurch.

Jonathan partisans on social media try to exploit the amnesia of Nigerians to claim that Sowore is only the victim of karmic retribution for opposing Jonathan’s administration, which putatively granted Nigerians unfettered freedom of speech. Well, several people, including Sowore, are being tried now using a repressive law that was signed by Goodluck Jonathan.

The Cybercrime Act, which Jonathan signed into law in 2015, prescribes a three-year jail term or a fine of 7 million naira or both for anyone convicted of “causing annoyance, inconvenience, danger, obstruction, insult, injury, criminal intimidation, enmity, hatred, ill will or needless anxiety to another.”

One of Sowore’s offenses, according to the charge sheet from the government’s prosecutors, is “That you Omoyele Stephen Sowore… did commit an offence to wit: you knowingly sent messages by means of press interview granted on ‘Arise Television’ network which you knew to be false for the purpose of causing insult, enmity, hatred and ill-will on the person of the President of the Federal Republic of Nigeria.”

As you can see, the charge against Sowore was taken straight from Jonathan’s Cybercrime Act. And this leads me to the fascistic social media strangulation bill being sponsored by Senator Mohammed Sani Musa of Niger State. The bill, like the ignorant “hate speech” bill being sponsored by another Niger State senator by the name of Aliyu Sabi Abdullahi, duplicates Jonathan’s ridiculously suppressive Cybercrime Act, which already criminalizes “causing annoyance… insult… enmity, hatred, ill will or needless anxiety to another.” What more do these dolts want?

Last week, Senator Musa said on national TV that the principal inspiration behind his sponsorship of the bill was to punish people behind the previously wildly trending social media rumor that Muhammadu Buhari was going to get married to Ms. Sadiya Umar Farouq, who masquerades as “minister” of Humanitarian Affairs, Disaster Management and Social Development even though the real minister is Fatima Mamman Daura, Mamman Daura’s favorite daughter, who works as a director there. 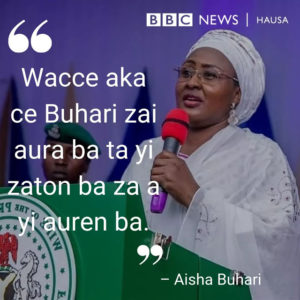 In other words, according to Aisha, the wedding rumor had basis in truth and Sadiya, in fact, was prepared for the wedding until it was called off because of the unexpectedly unusual social media attention it generated.

People close to Aisha told me it was actually Aisha and her social media handlers who instigated the social media hype over the wedding in order to embarrass Mamman Daura and ultimately thwart the wedding. And they succeeded.

Nonetheless, the same Aisha Buhari who confirmed that there was indeed a plan for Buhari to get married to his former mistress, Sadiya Farouq, reportedly told TVC’s “Journalists Hangout” that the rumor was fake. “I didn’t take it seriously because even my husband didn’t know what was happening,”

she said. “Both of us didn’t know what was happening; they just decided to bombard social media with it. They are now taking to social media to bring down the government itself.”

She was clearly told to say that to manage the damage that my revealing her BBC Hausa media interview to the nation caused. Note that Aisha is barely literate. Her “degree” from the Kaduna satellite campus of Ambrose Alli University was fraudulent. It was acquired after the NUC had banned satellite campuses of universities, which were basically diploma mills, from issuing degrees. She used the illegally acquired satellite campus degree to get admission into NDA to study for a “master’s degree.”

Apart from being illiterate, she’s also a dissembler who exploited her opportunistic fight with the Aso Rock cabal to buy herself undeserved national sympathy. But she’s unraveling now after settling with the cabal. Nigerians should ask her to reconcile what she told BBC Hausa on October 13 and what she told TVC on December 5—if she’s intelligent enough to understand the question, that is.

By the way, Senator Musa, the sponsor of the social media bill, is the same APC party man whose company INEC contracts to produce card readers and PVCs for elections since 2015. That is ethically questionable. Of course, such a morally stained wheeler dealer would want to shut down social media under false pretenses to conceal his shenanigans.

Musa’s shamelessly plagiarized social media bill targets Nigerians not only at home but also abroad. The bad luck for him is that even if he succeeds in passing it into law, it won’t affect Nigerians who live in the US. In 2008, the state of New York enacted what is called the Libel Tourism Protection Act, which “prevents litigants from enforcing foreign libel judgments in the state unless a New York court finds that the jurisdiction issuing the judgment provides the same free speech protections guaranteed under the U.S. and New York state constitutions.”

A federal version of this law was passed as “Securing the Protection of our Enduring and Established Constitutional Heritage (SPEECH) Act” in 2010. Since Nigeria does not have the same free speech protections as America, there’s not a snowball’s chance in hell that the social media bill will have any effect on those of us who live in America.

That was why I was shocked when Aliyu Sabi Abdullahi reported a US Embassy Political Officer by the name of Jerry Howard to have said that the hateful, ignorant, needlessly duplicative “hate speech” bill he is sponsoring in the Senate is “impressive.”

I doubt that Mr. Howard actually said that. But if he did, he would be guilty of what former President George W Bush once called “the soft bigotry of low expectations”: a form of benign prejudice that sets a low bar for people thought to be inferior.

America has no hate speech laws. The US Supreme Court has consistently ruled that hate speech laws are unconstitutional. The cure for hate speech in America is more free speech or, as Justice Louis Brandeis put it, “more speech, not enforced silence.” Why should what is bad for America be “impressive” for Nigeria?

In any case, the bill Senator Abdullahi is sponsoring isn’t even hate speech in the proper sense of the term, as I showed last week; it’s a mix of defamation (which is already covered in Nigeria’s extant laws) and a sly protection of corrupt government officials from critical citizen commentary.