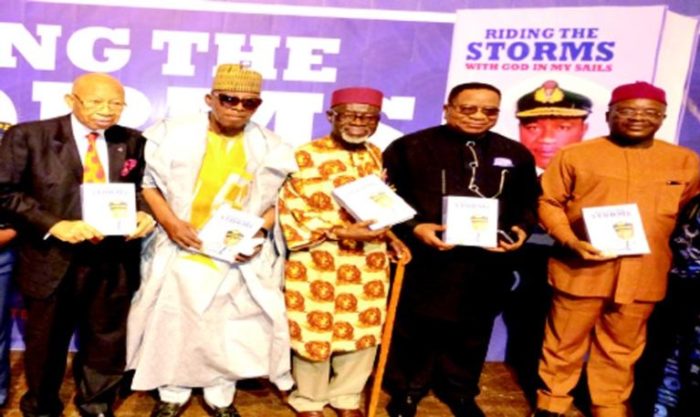 Riding the Storms with God in my sails; the autobiography of Rear Admiral Alison Madueke.

Rear Admiral Alison Amaechina Madueke has joined a growing list of Nigerians calling for restructuring of the country. According to the former chief of Naval Staff, addressing the problem of Nigeria’s structure is the only way for development across board.

He made this known on Thursday, November 27 at Muson Centre, Onikan Lagos as he presented his autobiography titled “Riding the Storms with God in my sails.”

Men and women who made have a mark in their respective fields and also from different ethnic and religious background were gathered to celebrate the illustrious career of Alison Madueke. The diversity was a testament to the fact that Alison Madueke is not only a prominent Nigerian, he is also detrabilzed.

“I never saw an officer under my command as Igbo, Fulani/Hausa or Yoruba. I saw them as Nigerians. That was when I had the honour to appoint Alison Madueke as Naval Attaché in Washington US. He got the appointment based on merit. He was the best.

A former Nigerian Ambassador to the United States, Prof. George Obiozor also spoke glowingly of the new author. He said “If you see Alison, you know he is educated. He has education written all over him.

“Many years ago, when he was asked what his aspirations were, he replied, ‘I want to enjoy my career in the Navy and see the world.’ Ultimately, I would want to head my country’s Navy.’

“What a prophecy foretold. It is not blasphemous to say that God answers prayers selectively. That is why they say God’s time is the best. This man fought in the civil war and came back alive. He never gave up. Read this book and be inspired never to give up. Do your best and leave the rest for destiny.”

President-General of the Ohaneze Ndigbo, Chief John Nnia Nwodo, Praised the author for his efforts.

Nwodo expressed that “It is a serious goldmine for him to put his experience in a book. I beg you to read this book so we can have intellectual discourse with his experience.”

According to the book reviewer, Prof. Paul Egbuna Modum, It is a 500-page volume, excellently finished, produced in hard and soft covers with a surfeit of illustrative photographs.

“It is not just the physical form that is of excellent quality, it is also the content. “The author writes with lucidity, deliberate clarity and an uncommon authority that portrays a keen awareness of his surroundings and events.”

“All these qualities coupled with a flowing, easy to read language, makes the narrative stand out in comparison with similar works of the same theme,” he said.

Speaking at the end of the presentation, the author, Rear Admiral Alison Madueke said: “I have only told a story, the story of my life. You might ask: why did you decide to tell your story? I decided to tell my story so that no other person will tell my story for me.” He said when one had been in public office many of the things he says and does can be misinterpreted, citing examples with an incident where he was said to have addressed traditional rulers in Enugu State as “guys” shortly after he arrived from Washington D.C to Enugu as the military Governor of Anambra State. “So, it is good to tell your story. The incident that led to our retirement; my fellow victim (Major-General Chris Alli, former Chief of Army Staff) is here. What was it? It is in this book.”

He also reminded the audience about the newspaper headline of Weekend Classique of September 16, 1994: “MADUEKE NAMED IN ARMS DEAL” after he had been retired. He said he was shocked to read the fake news that he was importing arms with Navy Ships.

“They said I joined forces with MC Alli.” According to Madueke, those who fabricated the story took it round the media houses, but none agreed to publish it. “It was only Weekend Classique that took N250, 000 and agreed to publish it. The publication, is here in this book. So that is the reason I had to come out and say what happened. We took a stance that was for the benefit of this country. and we agreed that if we were sacked, so be it. But we are still here. Some of the people that asked us to go are no longer here. So, distinguished ladies and gentlemen, I thank you so much for being part of my story (by coming here today) I love you.”

Speaking of the current structure of the country, he stated that “It is my conviction that unless we address the fundamental defects of our structure, failure and difficulty in governance will continue to dog Nigeria, irrespective of who, or which political party, was in power.”