Home Columnist Nigeria, South Africa and the search for leadership – By Abimbola Adelakun 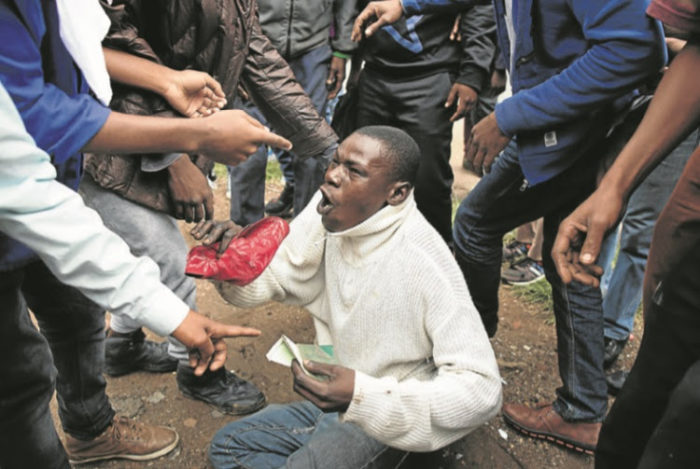 During the meeting of world leaders at Paris, President of the African Development Bank and former Agriculture Minister, Dr Akinwumi Adesina, trended on the social media. He had been pictured with different world leaders at the G7 meeting, and before he knew it, Nigerians declared him a presidential material. They were not merely superficial, mind you; what underlined that campaign was the yearning for our country’s leadership mantle to be in the hands of someone truly cut out for it.

Since the Fourth Republic started, this must be the period when the leadership vacuity in Nigeria has been felt most keenly. It is no surprise that people are desperately searching for a respectable leader, one who does not pick his teeth while the country burns.
It is in the context of this leadership vacuum that one should understand the various onslaughts against the country, locally and internationally.

At home, the mounting cases of violence had become so routine that nobody seemed bothered when the news broke that 15 people were killed and 55 more were kidnapped. Nigeria has also been involved in diplomatic tiffs with some other countries; one wonders if anyone is still in charge of the country’s foreign policy.

The burning case of attacks on Nigerians and other foreign nationals in South Africa is one of those areas that have exposed our administrative sloppiness. For months now, the killings, riots, and widespread looting of businesses owned by Nigerians and nationals of other countries have intensified, but the response by Nigeria has not been as urgent. While their anger might have been misdirected, the Nigerians that raided businesses they believe belonged to South Africa took more decisive steps on the issue than the government itself.

It was a crying shame that another Nigerian ended up dead in the process, proving once again that we have scant regard for ourselves.
South Africans, their psyche still weighed down by the trauma of apartheid, are whipping themselves into a frenzy and looking for foes where they should be building allies. Yes, about 52 per cent of them live below the poverty line, and the face of that statistic is racially black.

As it happens in these cases, because the real enemy of the people is too abstract to be fought with carnal weapons, they look for a scapegoat to bear the brunt of their angst. Their present unenviable conditions weighed against the precarity of life they experienced under apartheid, make them lash out at other Africans whom they hold responsible for their problems.

They have been holding anti-immigrant marches and their claim that they are cleaning their streets of drug dealers is a dog whistle to mobilise others to unleash violence. Unfortunately, those tantrums cannot solve their problems. What ails them is not the Nigerian immigrant or small business owner who is trying to build dignity along with a business, it is that they have been asked to subsist in an economic and political system that was not created for them to thrive.

If they will get out of their economic and social woes, they need the support of other Africans. To get that support, they need to get over their denialism. The spate of attacks has escalated, yet they are hard-pressed to admit that the violence has anything to do with Afrophobia. The South African High Commissioner to Nigeria, Bobby Monroe, insists the crimes were “sporadic acts of violence,” and that the perpetrators were equal opportunity bandits. Mind you, those carrying out the attacks state and act otherwise publicly.

These are challenging times, and unfortunately, across the continent, we can barely find a charismatic leader with a unifying vision who can speak eloquently to diffuse the stiff tension. We have not produced a sophisticated leadership class that can rally people based on what unites us, so we can all bury the hatchet in the skull of the common enemy.

Even though Nigerians are not the sole victims of the South African xenophobic attacks, we have the highest casualty rates. That means it not only behoves us to confront the crisis on behalf of other Africans, we can also provide a road map for the continent to resolve this problem.

Unfortunately, given what we know about the Nigerian President’s epic unawareness of everything going on in the world and even around him, one is tempted to believe he has not grasped the depth of what is going on in South Africa right and why Nigeria — nay, Africa — needs him to act with demonstrable urgency. Gone are the days when Nigerians had a leader with well-defined foreign policies, one that could intervene in larger global and continental affairs with a lucid goal in mind.

There was a time our country carried some weight that we could take a moral stand on apartheid. Today, we have regressed to the point that our class of leaders does not compel attention outside of their national enclaves.

People have blamed the tendency towards xenophobia on the failure of South Africa to teach its people their history of the apartheid, and the roles played by countries like Nigeria in ending the scourge against their humanity.

While that point is valid enough, there is no guarantee that a history lesson is a philosophical penicillin that will turn those carrying out the attacks from crime to gratitude towards their past benefactors. History lessons are good, but a knowledge of the past is no bulwark against our repeating it.

In fact, it would be a mistake to assume abject ignorance on the part of the people. What is happening there goes beyond cases of crime being committed by some random ignorant and disempowered political subjects. When you listen to their media reports of the attacks, you come off with the impression that the attacks enjoy the consent of their elite and the ruling class. They too would probably be out on the streets doing the same thing if they did not have to protect their well-manicured public status from the messiness of massacres.

To confront the recurring problem of Afrophobia in South Africa, they need to heighten their level of social conscience. That will not happen without a conscious effort on their part, and this is where diplomatic peer pressure as a compelling weapon comes into good use. It is a good start that countries like Zambia called off a friendly football match with them, and countries like Rwanda, the Democratic Republic of Congo, and Malawi are also pulling out of the World Economic Forum taking place in Cape Town this weekend. Other leaders need to go further.

When Muhammadu Buhari meets Cyril Ramaphosa next month, he should insist on prosecution of the offenders and rehabilitation of the victims. Nobody should bring up the needless suggestions that the victims should return to their countries or that we too should fix our countries and stop taking our nuisance elsewhere.

Those points are not tenable; we live in a world where our umbilical cords have already connected us and our destinies. Besides, South Africa’s relationship with the world is not a one-way affair; it is mutually beneficial. So, beyond challenging South Africa to deal with the hate within its borders, I hope other African leaders rise to the moment and speak on the necessity of developing a pan-African agenda.

The rest of the world cannot be telling us to “go back to Africa,” and we also limit ourselves to the confines of our artificial national borders.

Our potential for innovation, growth, and development is far likelier to be realised if people and goods can move more easily across the continent. We need better policies that will enable us to move across this vast gigantic continent and do things together. We need leaders who can facilitate the connections that will enable us to thrive together.