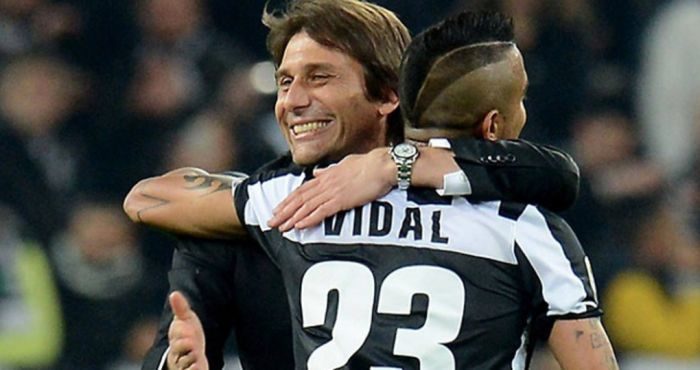 Former Juventus and Chelsea manager, Antonio Conte is keen on reuniting with his former player, Arturo Vidal.
According to Gazzetta dello Sport, Conte’s interest has prompted Inter Milan to make an approach to Barcelona for midfielder.
Conte has already coached the Chilean at Juventus and wants him to replace Radja Nainggolan in midfield, whom he has discarded for ‘various reasons’.
Barcelona are willing to let Vidal go for €20-22 million but the Catalan giants do not want talks to drag on beyond the next two weeks.
“Conte and Beppe Marotta want to sign one big player for each part of the team,” Gazzetta reported this morning.
“Inter’s squad is mostly made up of players whose trophy cabinets are empty and they need to raise the bar.
“That’s why Diego Godin arrived in defence, that’s why they’re chasing Romelu Lukaku and Edin Dzeko up front and that’s why they need a Vidal-type player in midfield.”
Conte and Vidal remain on good terms after their three-year spell together in Turin and both would be happy to rejoin forces at Inter.
Inter are pondering whether the deal would be doable but the Nerazzurri would have to sell players first.
Nainggolan needs to leave in order to make room for Vidal, but Inter need €30 million to avoid making a net loss and their idea of sending him to Jiangsu Suning may not entice the Belgian.
Joao Mario and Borja Valero are also on their way out and their departures could make a move for Vidal more realistic.