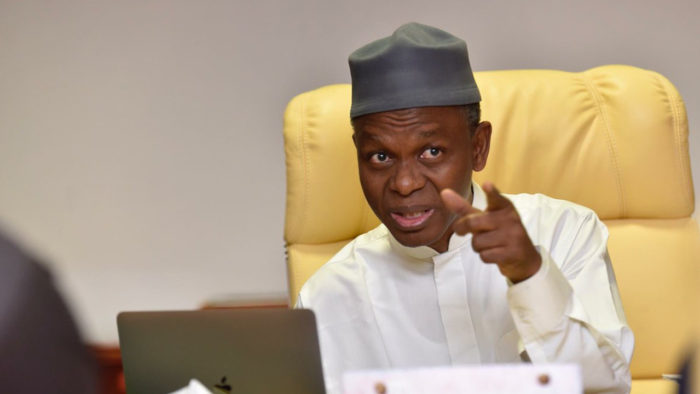 Kaduna State governor Nasir El-Rufai’s ludicrously impotent threat that citizens of foreign powers who intervene in Nigeria’s internal affairs “would go back in body bags” and his duplicitous attempt to explain away the homicidal signification of the trope of“body bags” are only the latest addition to his lengthening record of rhetorical violence and semantic legerdemain.

There is now no doubt that El-Rufai is a rhetorically violent thug whom the good people of Kaduna have had the singular misfortune to elect as a governor. I hope they undo their mistake on March 2. El-Rufai started to publicly invoke bloodcurdling thanatological allusions to shut down his political opponents on October 16, 2015.

“All of us in Kaduna State government have sworn with the Qur’an—Christians with the Holy Bible—to do justice and we will do justice,” he said in Hausa during a town hall meeting in Kaduna. “We better stand and tell ourselves the truth. Everyone knows the truth. No matter the noise, the truth is one. And as I stand here, no matter who you are, I will face you and tell you the truth. If you don’t want to hear the truth, you can climb Kufena Hill and fall.”

Sunday Vanguard of October 17, 2015 reported him at the time as having taunted his opponents to “go and die” if they didn’t agree with him. As is now his wont, he resisted that indisputably logical interpretation. Nevertheless, falling from Kufena Hill, as I wrote my November 1, 2015 column titled “El-Rufai’s Kufena Hills and Metaphors of Death in Nigerian Public Discourse,” is a chilling local metaphor for death. No one falls from a high, rough, steep hill like Kufena and survives.

Although Governor El-Rufai didn’t directly utter the word “die, ”I pointed out, Vanguard’s interpretive extension of his thanatological metaphor is perfectly legitimate, even brilliant. It’s interpretive journalism at its finest. It helped situate and contextualise the governor’s utterance for people who don’t have the cultural and geographic competence to grasp it.

Since anyone who jumps from the edge of an enormous hill will naturally plunge to his death, it was impossible to deploy the resources of linguistic logic to defend the governor’s choice of words as anything other than a call to suicide to his opponents. Text derives meaning from context. In any case, the video clip of the town hall meeting where El-Rufai enjoined his critics to go climb Kefena Hill and fall showed him in a combative and livid mood.

I challenged Governor El-Rufai and his media aides who insisted that asking people to jump from a giant hill and fall wasn’tsynonymous with asking them to go die to prove their point by jumping from Kufena Hill and living to tell the story. They didn’t take up my challenge.

Again, at a Kaduna APC stakeholders’ meeting in September 2017, El-Rufai told political opponents that should they insist on fighting him, they would all die like the late President Umaru Musa Yar’adua did. “I had fought with two presidents,” he said. “Umaru Yar’Adua ended in his grave, while President Goodluck Jonathan ended in Otueke.”

Some people in Katsina understood this statement as El-Rufai’s self-confession of culpability in the death of the late president and asked that he be prosecuted for murder. That was, of course, an inaccurate interpretation of his words. El-Rufai obviously cherishes the illusion that he possesses supernatural powers that can send his opponents to their untimely graves if they dare him. That is probably why he thinks he can put citizens of the US, the UK, and the EU who intervene in Nigeria in “body bags” and live to tell the story! He fancies himself as some invincible, immortal man-god.

In the aftermath of the massive domestic and international backlash against his threats of mass murder of foreigners, he said he didn’t imply that foreigners who intervene in Nigeria’s affairs would be murdered. But that’s an indefensibly unintelligent semantic obfuscation. A body bag is a “bag used for carrying a corpse from a battlefield or the scene of an accident or crime. ”Other than mass murder, what else could El-Rufai possibly mean when he said US, UK, and EU citizens who intervene in Nigeria’s affairs would go back to their countries in “body bags”?

I called it a ludicrously impotent threat because you’re talking of the world’s strongest military powers. In the event of a military confrontation with these powers, Nigeria would be history in a matter of weeks, perhaps days.

El-Rufai’s fulmination against foreign intervention is particularly noteworthy because during the late Umaru Musa Yar’adua’s administration, he and unprincipled, air headed Nuhu Ribadu went on self-exile in the West and actively discredited and sought foreign intermediation against the Yar’adua government from their foreign bases.

By the way, the most potent bulwark against foreign interference or intervention is to resist begging for and accepting aide from foreign governments to conduct elections. The US, the UK, and the EU have collectively sent millions of dollars to Nigeria for the conduct of the forthcoming election. The moment you take money from foreign governments for something as basic as conducting elections, you’ve already surrendered your sovereignty, and your patriotism is hollow. Samuel Johnson was right when he said, “Patriotism is the last refuge of a scoundrel.”

In all of this, though, my greatest relief is that El-Rufai’s tenure as Kaduna State governor has afforded the nation the opportunity to know who he really is. Many people who had been seduced by his occasional flashes of intelligence had suggested that he would do well as Nigeria’s president someday. Now we know that he is an intolerant psychopath with homicidal impulses.

In my September 23, 2017 column titled “El-Rufai’s Morbid Fixation with Death of His Political Opponents,” I pointed out that El-Rufai betrays a disturbingly shallow humanity and a murderous inner disposition. He, for example, endorsed, defended, and even celebrated the brutal, cold-blooded, and unjustified mass slaughter of hundreds of Shiite Muslims in his state.

As I’ve pointed out in the past, he obviously has grandiose delusions that lead him to think that he deserves unquestioned obeisance from everyone. He also thinks he has a special relationship with imaginary supernormal powers that fight his opponents to death. Those are classic symptoms of malignant megalomania.

The American Psychiatric Association defines megalomania, which it also calls “delusional disorder, grandiose subtype,” as “delusions of inflated worth, power, knowledge, identity, or special relationship to a deity or famous person.”

El-Rufai’s claim that Yar’adua’s death was the price he paid for opposing him politically, his self-delusion that he can successfully “body bag” US, UK and EU citizens who intervene in Nigeria, his oversensitivity to even the mildest criticism, his legendary lack of empathy (evidenced in his perverse love to remorselessly destroy people’s homes, the joy he exudes when people he hates die, etc.), and his exaggerated notions of his importance, for me, show symptoms of a man who is held hostage by megalomania.