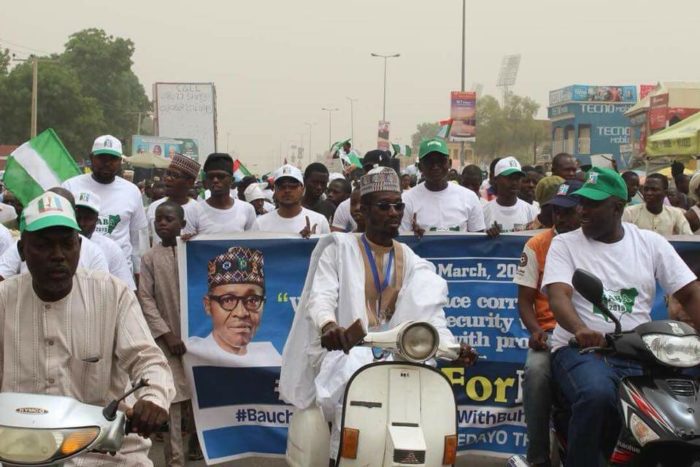 Some clarifications are in order. By Buhari’s fan club I’m not by any means referring to those who constitute the power behind the throne – the invisible hands that make things move.

No, not the notorious cabal, real or imaginary, that critics love to hate with passion, the ones often accused of holding President Muhammadu Buhari captive, rendering him almost immobile. No, not the clique whose unwholesome influence seems to  make him incapable of walking the talk, forgetting promises made and promises broken, the ones who make it almost impossible for him to live up to the expectations of his teaming followers.

And the teaming followers here naturally include those who are so remorselessly fatalistic they see no evil and hear no evil as far as any matter about President Buhari, fondly called PMB, is concerned – not even when their own interests and their own livelihood and even their own self-respect are concerned; not even when the covenant between them and their idol is respected more in the breach than in the observance.

Yes, these are the folks who constitute Buhari’s cult followership, the ones who have elevated him to the realm of extreme nobility and infallibility. They may not get their just rewards as far as dividends of political support and loyalty are concerned. But no matter. As they say, nothing spoil! Just don’t ask them to count their blessings, if any.  It is enough for them to belong to the change ideology, the sai baba cheer leaders. They are not worried about the tangibles.

Their mission in politics, it would seem, is to make the ruling class happy and contented. These true believers are the bona fide members of the Buhari fan club. Don’t dare them by criticising their idol within ear shot.  See the way they react to anyone who have had a different view on the current constitutional conundrum occasioned by the suspension of Justice Walter Onnoghen. They are quick to react. But they are brash and dismissive of any contrary view. And they do so with impunity, anointed with a certain sense of entitlement.

One Dennis Agbanya had on January 7 written a petition to the Code of Conduct Bureau accusing Justice Onnoghen of breach of the code of conduct by failing to declare his assets immediately after taking office as Chief Justice of Nigeria. The petition was received by the bureau on January 9. The charge sheet was prepared on January 10 and was filed on January 11. He was to be arraigned before the Code of Conduct Tribunal the following Monday having admitted in writing that he forgot to include some of his assets.

On the day he was to be arraigned, the CJN did not appear before the tribunal. But his lawyers did. And they came in bus loads, more than 90 of them including 40 senior advocates for Nigeria, SAN, led by Chief Wole Olanipekun. The lawyers had raised the issue of jurisdiction and the tribunal adjourned till January 14 to hear the argument of the defence counsel.

Before then, two courts, a federal high court and the industrial court, had restrained the tribunal from hearing the case. The Federal Court of Appeal weighed in too and asked the tribunal to stay proceeding until the substantive suit before it was heard.

And, as if from the blues, President Buhari said he had been ordered by the same tribunal, the one that had adjourned to determine its own jurisdiction, to suspend Justice Onnoghen and to swear in Justice Ibrahim Mohammed Tanko, the next most senior justice in acting capacity.

In carrying out this injunction, the president apparently faithful to the rule of law, due diligence and in total obedience to the directive of the tribunal, harped correctly on the fact that he was directed and he had no choice but  to obey. In carrying out what looked to him like a difficult assignment, the president appeared, however, persuaded by the fact that “the nation had been gripped by the tragic realities of no less a personality than the Chief Justice of Nigeria himself becoming the accused person in a corruption trial since details of the petition against him by a civil society organisation first became public about a fortnight ago.”

As to be expected, there was a backlash. And it came in torrents from lawyers and laymen, from politicians and civil society groups, from both local and the international community. The essence of the reaction is squarely on the breach of the procedure for disciplining any judicial officer including judges and even the Chief Justice himself. And several laws have been cited and counter-cited all to the effect that by-passing the National Judicial Council, the only body authorised by the constitution to discipline judges, is tantamount to self-help and judicial ambush.

No matter how anybody argues for and against in this messy affair, this fact of the NJC stands out like a sore thumb. And there is a surfeit of cases decided in favour of not by-passing the National Judicial Council, no matter how angry and how frustrated one can be with the judiciary.

And justice cannot be done or seen to be done if the processes are short-circuited, if due process is not followed and if the rule of law is set aside in favour of the rule of the whims and the caprice of power. I am surprised that the man who is in the centre of the storm, of this constitutional aberration, the president himself, in the same speech in which he arbitrarily suspended the CJN, had said that if justice cannot be done and seen to be clearly  done, society itself is at risk of the most unimaginable chaos. If that is the case, one may ask, why was the indecent haste to do that which would cause unimaginable chaos?

The president spoke well, no doubt. The speech dismissing the CJN was well-written but badly intentioned in the eyes of the law and even common sense, not to talk of decency and the good of the society. I went through the speech over and over again to see what persuaded the president, the man who confessed that he was never in a hurry to do anything, to take this hasty and unfortunate decision. I suspect that the real reason might not be the “forgetfulness” of the CJN, in filling his asset forms, an error which I learn from a respected lawyer, can be corrected.

The catch seems to come from this quote from the president’s speech: “It is no secret that this government is dissatisfied with the alarming rate in which the Supreme Court of Nigeria under the oversight of Justice Walter Onnoghen has serially set free, persons accused of the most dire acts of corruption, often on mere technicalities, and after quite a number of them have been convicted by the trial and the appellate courts. Since there is nothing the executive arm can do after the apex court of the land has spoken on the matter, several of these individuals walk free (sic) among us today enjoying what are clearly the proceeds of corruption …”

Since this is not part of the case against Justice Onnoghen at the Code of Conduct Tribunal, what is the import of this rather toxic observation here? That this is the real reason why the hammer fell on his head? Members of the Buhari fan club who have all the right answers to the acts of omission and commission of the government may come to our aid. And quickly too.