Home Columnist Buhari, Tinubu and the Abdication of Responsibility – By Dele Momodu 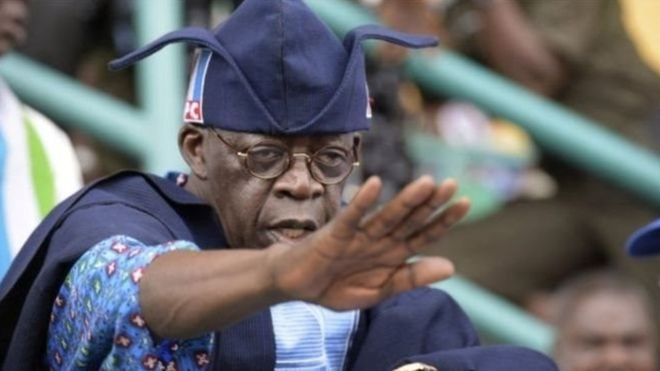 Fellow Nigerians, despite the open and brazen braggadocious posturings of the ruling party, things seem to be fast falling apart within the All Progressives Congress (APC). The arrogance of power probably must have misled some of the powerful gladiators in the party that they are invincible and infallible. But unwarranted arrogance and pride go forth before a calamitous fall. There seems no doubt that the APC also underrates the extensive networks and connections of Alhaji Atiku Abubakar who has been in this race for 25 solid years. Speak to most of them, they will boastfully tell you that Buhari owns the North of Nigeria, as if the North is one State or monolithic or homogenous region. Except for those too lazy to analyse the ethnic, religious and political configuration of Nigeria, there has never been a single place called the North. It was merely one of the cunningly systematic way some politicians inferiorised and brainwashed Southern Nigeria into thinking “Oh we can’t win the election because the North will not agree.”

Except for military interventions that gave some parts of the Northern region some edge and predominance over other parts of Nigeria, particularly in the South, only three Northerners and three Southerners have ever won Presidential elections at the highest levels, namely, Shehu Shagari, Moshood Abiola (though conspired against and could not assume office), Olusegun Obasanjo, Umaru Musa Yar’Adua, Goodluck Jonathan and Muhammadu Buhari. We had pre-Independence leaders who presided as our first and only Prime Minister ever, Tafawa Balewa, 1957-1966, who shared a bit of his power with Nnamdi Azikiwe, who was our first and only ceremonial Governor General of Nigeria, from 1960-1963, before emerging as the first President of Nigeria, from 1963-1966, when our country became a Republic. In reality, Nigeria is too diverse, and too intertwined to be claimed by any one group.

What has happened is that the politicians, from both sides of the divide, have managed to manipulate our brains and hoodwink us in such a way that most people begin to doubt their own existence, like the French philosopher, Rene Descartes. Nigerians have also been kept down through the greatest forms of hypnotism, mass illiteracy and abject poverty, a very lethal combination. No Nigerian politician has benefitted from this political cocktail than President Muhammadu Buhari, who the poor masses see as their friend and Messiah who will free them from their wicked oppressors and fiendish looters. Prior to 2015, Buhari could do no wrong, as far as this class of people were concerned. But the burble is beginning to burst. I will explain how it happened in a jiffy.

Buhari would have preserved his image as a poor man, friend of the poor, the incorruptible avenger, the Messiah without a blemish, if he had not gone in to politics or if he did not win the 2015 Presidential election. Many of us would have been screaming our heads off, that he was cheated a fourth time, that unscrupulous Nigerians wickedly robbed us of yet another good leader, like Obafemi Awolowo, Moshood Abiola, Gani Fawehinmi, and a few other icons who contested at one time or the other. To win that election, Buhari needed to go through some rituals, or rites of passage, which were totally controlled by those he once regarded as bad guys. And of course, he needed what James Hadley Chase called The Whiff of Money to sustain and fulfil his ambition. And no individual could possibly have matched the PDP, cash for cash since they were getting their cash by dipping their hands, indeed their whole beings, into the most secure and productive vaults in the country – the Central Bank and the NNPC. So, Sai Baba got practical and sought the kind benevolence of his erstwhile sworn enemies. He had to crisscross the country, cap in hand, pleading for help and support. He knew he had to visit and beg the big dons, the acclaimed owners of the land who have the keys to unlock the doors of power and fortune.

Buhari navigated his way to former President Ibrahim Badamasi Babangida in Minna, Niger State, the same military General who sacked him unceremoniously from power in September 1985, and from there meandered his way to former President Olusegun Aremu Okikiolakan Obasanjo in Abeokuta. He also travelled to see General Theophilus Yakubu Danjuma in various places. He must have had to swallow his pride in all this sallying to and fro.

Having engaged the powerbrokers, Buhari went for the financiers. He knew that one of the major problems of his previous failed bid was the inability to sustain campaign as he did not have the financial resources to maintain the same. He  needed billions and billions to pay polling agents or risks his votes being diminished or outrightly stolen. He turned to Chibuike Rotimi Amaechi who was a Director General of a Presidential campaign, like no other, from 2014-2015. He went all out to seek funds and made available a gleaming private jet owned by the Rivers State Government which more than eased the campaign itinerary and logistics of the Buhari Campaign Organisation. Bola Ahmed Tinubu, the capo di tutti capi of Lagos, was eventually beckoned and coaxed to come on board and persuaded to be on hand to arrange this and that. Bukola Saraki was also heavily involved in mobilising funds from his wealthy friends many of whom he managed to get to drop some heavy sums out of their billions. Aliko Dangote, Femi Otedola, Wale Tinubu, Muyiwa Bakare and many others were some of the faces who were regularly at Saraki’s Ikoyi home in Lagos to make contributions. Meetings were also sometimes held in Femi Otedola’s iconic apartment in Knightsbridge, London., where Dodi Fayed and  Princess Diana once lived. Buhari was very much in the know of the powerful military, political and financial coalition that were behind him.

These personages were united in one mission, to arrest the perceived perfidious drift of the nation towards perdition. They were all close to President Goodluck Jonathan but felt that he had allowed too much laxity and excess and was allowing some of his aides to get away with murder. They did not expect freebies from Buhari, but they felt he was going to reorder the nation and provide a level playing field and opportunities for every Nigerian, without fear or favour. Let’s again postpone the full story.

However, no sooner than Buhari took power that things began to turn awry. Many of his supporters began to see a new Buhari. The Buhari that used to listen and act on advice during the campaign was no longer available and when accessible began to speak in monosyllables. By the time he moved finally into the gilded cage of the Aso Rock Presidential Villa, things were no longer at ease. And before you could shout Tinubu, Buhari had been hijacked and pocketed by a few members of his innermost caucus. This was the beginning of rapid descent into chaos and confusion in the ruling party. Since that turbulent beginning, it has been crisis upon crises, with no end in sight.

Naturally, the party got distracted by this unholy war of attrition. Buhari that was supposed to provide leadership, focus and direction acted like he was not bothered. His personable Vice-President, Professor Yemi Osinbajo, who could have helped the situation by providing strong, innovative and youthful leadership, did not have the cooperation of many of his subordinates who felt they owed their total allegiance to Buhari and no other person. It has always been obvious that Osinbajo has what is needed to set this great country on the path to greater heights, development, security and UNITY and this was made palpable and real whenever Buhari was on medical vacation. Osinbajo mingled freely with the populace, the intelligentsia and the privileged. He interacted well with members of his parties and other parties alike. They all liked and respected him. He was able to douse the brewing and explosive tension in the South East where Nnamdi Kanu was not only gaining momentum but was becoming a figure of hagiography. He assuaged the hurt feelings of the Niger Delta and got our oil production moving properly again. The economy thrived and with new rules of engagement about the ease of doing business, investors began to see Nigeria with fresh enthusiasm. Even the dreaded menace of militants in both the North and the South subsided as prosperity loomed and the things causing tension became calmer. For me, there was a great moment when Osinbajo went to the Murtala Muhammed International Airport in Lagos and cleaned the place of the duplicitous agents harassing passengers at will and we all applauded the new look, but within little time, the nuisance returned with a vengeance. Thus, as soon as his boss returned, he reverted to his military preference for using a sledgehammer to kill flies regardless of the ensuing damage.

Please, let me give one more example of how APC finally missed Paradise, in my humble opinion. Agents of the Federal Government had serially combined to harass and intimidate the National Assembly which was saddled with the task of checks and balances in the Nigerian Constitution. The last straw that broke the camel’s back was the invasion of the National Assembly by hooded operatives of the Directorate of State Security. The sad development soon went viral and the thoroughly embarrassed Acting President promptly corrected the anomaly by sacrificing the Director General, Lawal Daura. Osinbajo, immediately, announced the appointment of a new Director General, Matthew Seiyefa, in an acting capacity. Seiyefa was clearly the most senior officer in service at the time, and many applauded the decision. Then rumours began to fly as always that some powerful forces did not like the decision. The rumour became reality when Seiyefa, a harmless scholar, from Bayelsa State, was removed. Many were sad that day. Anyway.

Buhari and his cronies appear to have forgotten how time flies. They stepped on toes without realising elections were just round the corner and that the day of reckoning begins from the day after Inauguration. The Tinubus that had been studiously side-tracked would soon be needed. God’s judgment no longer flies on a chariot of fire but on supersonic jet. Oh, before I forget, APC sacked a perfect gentleman, John Odigie Oyegun, and brought my Brother, Adams Oshiomhole, the firebrand ex-unionist, who began his own war, and may ultimately become the Waterloo of the party. Again, Buhari failed to act decisively and the acrimonious war of attrition has since turned into a third world war, unabated, less than 40 days to the final day of reckoning. A house divided against itself is surely in peril of eventual collapse and this is the script playing before our very eyes.

Nothing has convinced me more that APC and President Buhari and his cronies are in panic mode than the abdication of campaign responsibilities to the Don, Bola Tinubu, who I know many of Buhari’s close allies cannot stand. But they all know, as a matter of fact, that this daring politician is their last chance. What is more, if they fail at the polls, they will be able to blame Tinubu for their failure. I do not envy my big Brother, Tinubu, at all. This position appears to me to be a poisoned chalice! To add to the conundrum for Tinubu, he has to go all out and destroy the last chance of his very good friend and former co-traveller, Atiku Abubakar, who has been on his own epic journey since, 1993, some 25 odd years ago.

This promises to be the biggest heavyweight bout in history. The world is watching with bated breath…