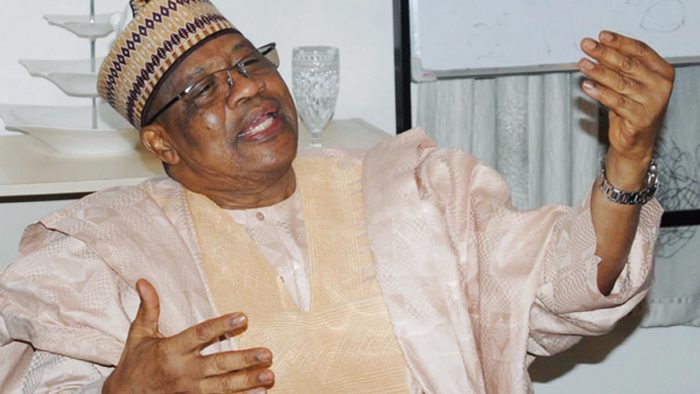 A former Head of State, General Ibrahim Babangida, has revealed what former President, Olusegun Obasanjo told him about the annulment of the June 12, 1993, presidential election.

Babangida, in an interview with The Crest, also said nobody gave him credit for the election.

The former Miltary leader spoke of the intricacies surrounding the election, and the details of what led to the annulment.

President Muhammadu Buhari had on June 12, 2018, tendered a national apology to the family of Moshood Kashimawo Olawale Abiola, presumed winner of the election, for the annulment of the election by Babangida

When asked why he failed to take the opportunity to support the 1993 democratic process, Babangida said, “Everybody said so. I agree. Even my boss, OBJ, told me that. He said you had an opportunity and if that had gone through properly, history would have recorded it as your greatest achievement.

“But then, we discussed at length what could have transpired. Again this: I will always talk about the Nigerian mentality. I think we are always anxious. We are always in a hurry.

“We want things to get done in the fastest time possible. I tried to go out and talk to the public on why we had to do this but we were overwhelmed with criticisms. Nobody wanted to listen.”

He continued, “I think people who said that have not been fair to me because when we started the transition programme, I was in the media; I said we will be doing it step by step, by learning. Wherever we met a hiccup, we will stop, change it and move again.

“On this, I was honest with Nigerians. I told them that, and they would have judged me with what I said on that particular issue. But everybody wanted the military to just leave. But I did say it, that in the process of implementation, we may have a hiccup or mistake. And if we do, we would pause, correct it and then move on.

“Even the transition after the June 12, we gave a time span which again nobody was patient with. But we studied, we compared to either have a non-conventional election or a general election.

“Again, if people allowed us, we said there would be a general election in this country. I think Abacha came in November. Nobody wanted to listen. Everybody was tired. I appreciate that. I appreciate it.

“Yes, people were bored and we envisaged it and we said it. We warned you in advance that if this happens, this is our next step. And that led us to the famous June 12.”

On whether he was threatened at the time by General Sani Abacha on being head of state, he responded,

“No, he couldn’t have threatened me, to be fair to him. But I knew he wanted that job at all cost. You will be reading it…”

Speaking further on why he decided on the annulment, Babangida continued, “I have a conviction that if I get involved in building this environment, I wouldn’t like to be seen as having the environment destroyed.

“That’s number one. I wouldn’t be part of the destruction. So, I either make sure I remain with it, and belong there, or a circumstance will come and, eventually, I will leave. When I leave, if it gets destroyed, nobody will blame me.

“I wouldn’t declare the result if (Professor Humphrey) Nwosu declared the result. I knew deep into this that there were consequences which will not be fair to this country. I give an example: I took part in the management of PDP and I can’t disown them because I’m part of them.

“I made an input into its emergence, and if you say it is the worst thing that could ever happen to the country, I cannot in all conscience sit down and say it is because I participated in it. If the transition failed, and I knew it would have fallen down, nobody would have been bothered. They will say no. I will feel guilty like after all I spent the money but it collapsed. My conscience will never forgive me.

“This was what we sought to establish. Could it better? If the answer is no, then, I take the blame because I should have put in place certain measures that will make it good. What we wanted was an enduring legacy.

“The credit of not getting it right? You wouldn’t give me; so, I accepted that I will not be given that credit no matter what I say.”