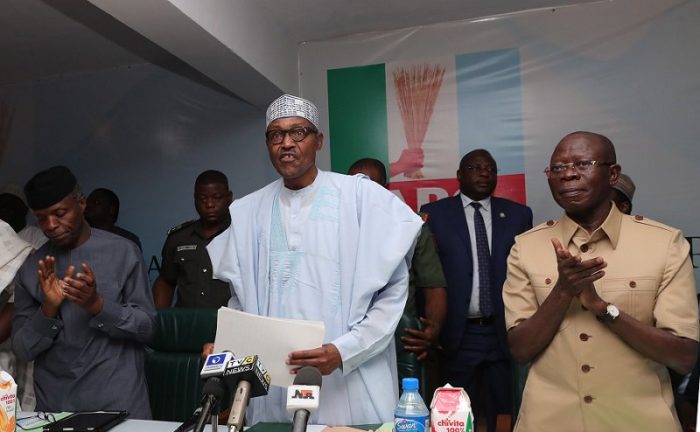 It’s too early to predict or even to expect that when, next week, campaign for next year’s general elections officially kicks off, we are going to be treated to the usual sparks, fiery speeches with the accoutrements of sound bites et al that make electioneering a memorable occasion.

Perhaps we may be lucky to have something to take home. And perhaps we may not be so lucky. In which case, we may be subjected to some gloomy shows replete with ponderous, sleep-inducing speeches that say nothing spectacular or fundamental except to pour venom and bile on political opponents.

Ahead of the campaigns, as if it is an earnest of these genuine fears, we’re already being treated to immeasurable supply of oddities – those anomalous episodes you’d expect not to see anywhere near serious political parties or the governments that are revving to take off on a long and serious campaign trip.

The ruling party, APC, instead of being an exception and a shining example, appears to be the real culprit. Only two weeks ago, I had the occasion to lament on this page that this was not the time for the party to present the picture of a divided house. But since then, it would seem, it has thrown all caution to the wind.

Aggrieved members of the party, not willing to play the game by its rules, seem bent on rocking the boat, apparently with some justification. Some of them came out of the primaries bruised on account of failure to get the party’s ticket or to fix their favoured candidates. Now, nothing, not even President Buhari’s intervention, can pacify them. To pick the fall guy, the lot fell naturally on Comrade Adams Oshiomhole, the national chairman of the party, who organised the primaries but who could not guarantee that each participant would win. Somehow, he didn’t have the joker to decree that, in all the cases, there was going to be no victor and no vanquished. So the vanquished and they are a legion, must draw the blood. Nothing but the ticket or Oshiomhole’s head would satisfy their appetite.

Then suddenly, and inexplicably, the Directorate of State Security, DSS, waded into the matter by asking the national chairman to come for a chat. First it was discrete. Then it became public – with the speculation that he had been arrested in connection with the bribe he was accused of taking to favour some aspirants. Tongues wagged, as they normally do in a messy oddity like this. Some said he was asked to resign and that the directive was from above.

But even if suffering from a curse, it was inconceivable that a president seeking re-election in a couple of months from now would call for the resignation of his party’s national chairman. So who ordered the DSS into the fray that is purely an intra-party affair? If there is a crime and it borders on financial malfeasance and corruption, does that not fall under the purview of the Economic and Financial Crimes Commission, EFCC?

We may never know. And that is one of the veritable oddities of our situation. The president whose re-election is being threatened inadvertently by those who should jealously guard his interests should naturally be angry. But he will not show any anger – not with his avuncular and grandfatherly disposition, to say nothing about his sweet reasonableness that seems to encourage some officials to disobey with impunity even presidential directives. It may be too late in the day for him to sacrifice a few deviants in the greater interest of the majority.

Is it any wonder, therefore, why any odd official  of government would appear free to interpret government laws any which way that would suit his individual interests or embrace wrong examples or react to dangerous signals or tweets from even President Donald Trump, the one who is incurably addicted to his tweeting intoxicant.

Two weeks ago a caravan of Mexican immigrants drove to the border with the United States. To prevent them from crossing over into Trump’s horror nest, the Mexican army and police deployed to the border to send back their citizens came under attack of stone and pebble throwing fellow citizens.

But to ensure the Mexican forces did not wilt under the persistent pressure of this army of determined immigrants, Trump deployed U.S. troops to secure the U.S. end of the border with a directive to shoot any immigrant that tried  to throw pebbles or stone at them as they were throwing at their own soldiers. Trump, true to character, defined stone as rifle fire and he urged his troops to return fire for fire.

“I say consider stone as rifle,” said the imperious U.S. commander-in-chief to the astonishment of his own troops. But he was persuaded to see the folly of his command and he rescinded it the following day. But the Nigerian Army didn’t see anything wrong with it. In fact, Defence Spokesman, Brigadier General John Agim, saw Trump’s order as a handy justification to use fire-arms against members of the Islamic Movement of Nigeria aka Shi’ites who were then engaged in a suicidal encounter with the Army in Abuja, armed with stone.

Oddly enough, the Army is an institution of the same benevolent government which, to ensure maximum comfort for the leader of the Sh’ites, El Zakyzaky, is sparing no efforts to provide comfort and to feed him well while in detention. A whopping N3.5 million is used to feed the man every month. And this is official.

Those who doubt this claim including his followers think this is mere government propaganda. Some of them, eager to get back at government, even made such dangerous insinuation like the money was voted to be embezzled by the same government officials.

But I can’t get it. Are they suggesting that those who cook for the mullah should not taste the soup to ensure that the local food, the tuwo sinkafa, or the caviar from Iraq or Iran is of the highest quality and that its culinary standard conforms with international best practices, the type that obtain only in Ritz-Carlton of Riyad or in the overpriced Waldorf Astoria Palm Jumeirah in Dubai?

Unfortunately, these fellows, perpetually sniffing around for fault, miss the point by a wide margin. Lai Mohammed, the minister of information, who was accused of breaking the news, did not say that El-Zakzaky is staying in any of these hotels or is a fan of any exotic government guest houses or that he is so miserly he does not cater for those who troop to him every hour from one end of the month to another. And what the hell are we talking about anyway? The N3.5 million in question comes to only N42 million per annum.

As if appetite grows by what it feeds on, one oddity breeds another and another. The opposition party candidate, Atiku Abubakar, exercised his democratic rights to hold strategy meeting with his team in Dubai, far from the prying eyes and the long ears of his political opponents. While he was there, the APC said the government must probe him – why, it asked, would he leave his country for another country to plan his political moves?

As if that was not odd enough, the man returned to the country in the wee hours of last Sunday to be welcomed by a battalion of assorted security men who, according to PDP spokesman, “violently rushed at him, nearly manhandled him and then rushed to his private aircraft and violently searched his travel bags.” Hmmmm!

Unfortunately, they didn’t find the foreign currency they were looking for. Which is a pity. And some cold comfort, too. If Atiku didn’t come from Dubai with hard currency, you may wish to ask, where in the world is he going to get the money to run his election campaign?