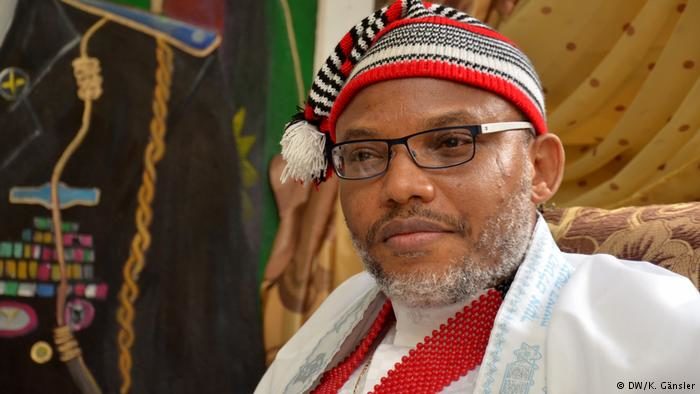 Nnamdi Kanu always strikes while the iron is hot. His reappearance after more than one year has dominated discussions online and offline, generating anxiety in some quarters and ecstasy in others. Some political candidates are already trembling, for the great crowd puller could make the difference between success and failure at least in the south-east. I guess even Peter Obi, almost certain to become Nigeria’s next vice president, has been on edge.

IPOB, the organisation Kanu leads, has roared back to life; he was expected to speak from Jerusalem Sunday evening. As of this writing, he’s yet to do so, but I can guess the content of his speech: criticisms of the Nigerian state and its armed forces (which reportedly attacked his ancestral home on September 14, 2017, leading to the death of 50 people and Kanu’s disappearance along with his father).

It won’t be appropriate to dismiss Kanu as a clown or a rabble-rouser. Wherever the 51-year-old visited in the south-east, south-south or Lagos, after his incarceration and release in May last year, young people especially welcomed him in their thousands with victory songs. What has earned him hatred is his penchant for raining abuses on those who did not agree with his advertised advocacy for a sovereign state of Biafra.

Apart from verbal assaults, however, he has been harmless. When it comes to acts of terrorism or treason,  no one would compare him to Ganiyu Adams as leader of the OPC – he’s now the Aare Ona Kakanfo (warrior) of Yorubaland – or any of the militants of old in the Niger delta and middle belt. Nor is he comparable to Boko Haram commanders and the criminals currently wreaking havoc in Jos, Zamfara and Kaduna.

Why then does the mention of Kanu evoke fear in some Nigerians? Here is an activist who doesn’t even have a standing army to engage in armed struggle. President Buhari and the military authorities simply made him more famous with “Python Dance”, an unnecessary military expedition that produced carnage in Igbo states: felling of unarmed protesters, disrupting of road transportation with too many checkpoints, molesting of civilians, rape, and arson – all in the hunt for Kanu.

Ndigbo have never had one man as leader. Only Gen. Emeka Ojukwu came close to achieving that status during the war being fought at the time of Kanu’s birth.  The influence wielded by any Igbo political leader of today doesn’t go beyond a few party loyalists. On a scale, Kanu commands greater influence because many youngsters share his feelings. As an Igbo leader myself – at least in my family and kindred, and as an opinion moulder read across the world – I can confidently state that IPOB’s agitation is for nothing near secession. Like other separatist groups, it aims to extract concessions from the Nigerian state, which everyone agrees has been tottering on the brink for the past 30-something years. Didn’t OPC ask for Oodua republic? Calls in the west for restructuring preceded the June 12 crisis. Ogoni people hoisted a flag to herald a new republic. When, therefore, Kanu told some Ohanaeze chieftains, before his disappearance last year, that he could accept restructuring of Nigeria in place of IPOB’s request, he was realistic.

On Facebook, I’ve asked my friends what offence this young man has committed that the rest of them have not. Is it name-calling? You find insults aplenty on the social media. And which has a wider reach: Kanu’s “Radio Biafra” (I’ve listened to it perhaps twice) or Facebook? Almost every Nigerian on Facebook could be convicted of “hate speech”!

Just as he can’t influence the way Ndigbo will vote in 2019, Kanu is no threat to Nigeria’s existence. I assume he’s merely pouring out his frustrations as a Nigerian – like the rest of us. The real foes are the terrorists who have killed no fewer than 30, 000 innocent people in the past nine years. Poor governance and economic depression make up another bad gang – they cause mass poverty and misery that often lead to social upheavals.

Eight years ago, this column attempted to douse the fears non-Igbo Nigerians often express. Major-General Azubuike Ihejirika’s appointment as chief of army staff, many said, was a “jinx” broken, a “historic” appointment of an Igbo to that “strategic” position. I queried what their phobia was. And I was vindicated: Ihejirika didn’t resurrect Biafra after all!

It’s no longer a secret that, indeed, there has been a conscious effort to keep Ndigbo away from power, money and armoury in the Nigerian state for the past 50 years. Yet, there can’t be any justification for shutting out the most hardworking, dynamic, technology-savvy part of the country from important positions all these years. Buhari’s side-lining of the south-east in appointments has made the marginalisation picture clearer. The roads in the zone are the worst. Young Ndigbo hardly get federal jobs. Street urchins are mobilised to attack them and their shops at the slightest provocation in the north.

Nigeria and Nigerians have been the losers. China, Malaysia, Singapore, India, the Koreas and others that started with the country on equal footing have been far, far ahead. We have been sacrificing competence on the altar of mediocrity all these years just to “punish” – and not to benefit from – the race that produced “ogbunigwe” and rocket launchers, made trucks and tanks from scrap, refined fuel at kitchens, and built airstrips overnight, among other incredible feats half a century ago.

Ndigbo fought a war, so what? Fighting in self-defence, they suffered heavy casualties as hurriedly recruited soldiers avoided warfronts and invaded Biafran villages to kill millions of unarmed civilians in their homes and destroy their properties – a war crime the United Nations overlooked.  Families were erased! Kwashiokor killed thousands of malnourished children. Women were raped and killed. After the war, Ndigbo lost their wealth, as the maximum amount the richest of them could withdraw from a bank was 20 pounds. Soon after, it was time to buy the shares of nationalised companies…  No! Those ugly memories are better forgotten. But anyone who feels Ndigbo have not been punished enough or must be ignored, despite their competences, is crazy.

While agitators like Kanu are pilloried, it’s also necessary to understand them. You can’t force one to be a “Nigerian” but treat them as a “Biafran”. That’s what provokes real wars – wars that linger for generations and still end in defeat for both parties. If an Igbo can’t be president and commander-in-chief of the armed forces of the Federal Republic of Nigeria, why won’t they ask for a separate state?

Politicians used to win votes outside Igboland by shouting anti-Biafra slogans. The millennials, most of whom will be voting for the first time in 2019, are likely to pooh-pooh that gimmick. For Kanu – and for every Igbo of his generation and younger – secession would be a last resort. They know it’s in their interest to have a large territory as homeland. That innate desire to accommodate all shades of humanity is the reason they are found in every town and village in the world.