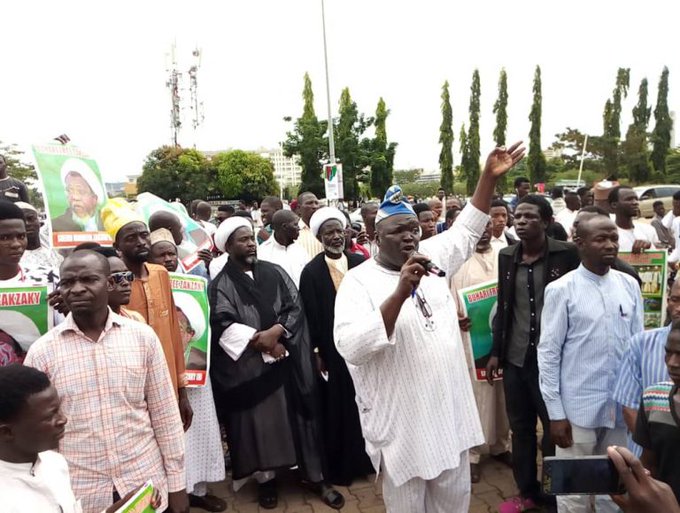 Members of the Islamic Movement of Nigeria (IMN) South West

Members of the Islamic Movement in Nigeria (IMN) from the south-west have called on people in the region to vote out President Muhammadu Buhari in 2019.

Addressing journalists during a protest at the entrance of the presidential villa in Abuja on Wednesday, Muftau Zakariya, south-west coordinator of the group, said the president has no “moral justification” to remain in office beyond 2019.

The group accused Buhari of being a dictator, saying he has no regard for the rule of law.

The group has staged series of protest to demand the release of Ibraheem El-Zakzaky, its spiritual leader, who has been in custody since 2015 despite a court order granting him bail.

“We came to protest today in Abuja to seek the release of our leader and convince government to obey court order,” he said.

“The court has ordered that El-Zakzaky should be released and be paid N50million as damages because of the illegal detention he has been subjected to, but the government has refused to obey that order. I am especially using this opportunity to talk to my fellow Yoruba men. No Yoruba man that is freely born should vote for Buhari.

“Somebody that kills northerners and elites, who shot a Muslim scholar, jailed and refused to give him bail. Let me tell you the equivalent of what Buhari has done, is like somebody catching Pastor Adeboye at Redeemed Christian Church of God, shooting  him and jailing him.”

Zakariya said the president showed he had less regard for the rule of law when he said national interest will not be sacrificed at the expense of the rule of law.

He alleged that those who vote for Buhari want the killings in the country to continue.

“If a president can go to the Nigerian Bar Association and tell them that he will not obey the rule of law, this shows you how shallow-minded this man is. This is the man that swore an oath on the Quran to obey the constitution of the Federal Republic of Nigeria,” he said.

Hope for HIV cure as scientists eliminate virus in mice

The return of Balotelli may kill Ronaldo’s World Cup dream