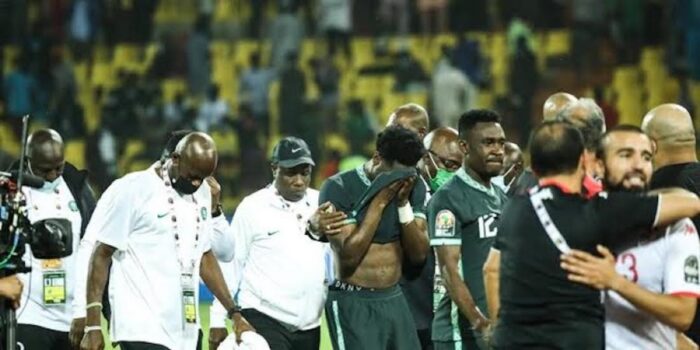 The eagle has crash landed again, just when the whole nation had begun to get enthusiastic and skeptics like me had begun to come out of our protective shells like the proverbial tortoise, to peep and feel some of that raw patriotic zeal and passion that only football seems to awaken in the great citizenry of the so-called great nation, Nigeria.

Oh! Super Eagles! Oh Eguavoen! You both do not know the ramifications of your exit at this round of 16!

The amount of wives who are giddy with excitement to have returned uncontested, to the role “sole controller” of the TV remote after suddenly seeing their position threatened by none other than the previously, docile and uninterested husband who knew his place and knew better than to deprive “mama Nkechi” from her Zeeworld and Telemundo plethora of series, all having similar “fantastic” love storylines, and similar or even same actors with just slightly different character names.

These wives will no longer have to make do with re-runs of the shows.the next day or information from their fellow viewers who had successfully co-opted their husbands into the Zeeworld or Telemundo gang and so could maintain their stranglehold on the remote irrespective of the sceptre of the African Nations cup, nor would they have to endure the live commentary and during and after match tactical analysis from their avid, on couch supporters of the Super Eagles, FIFA accredited technical coach-husbands (who never attended a FIFA coach training class, talk more of getting a fifa accredited coaching badge).

I weep for the bar owners and beer parlour managers, that saw a boom in patronage for the husband’s, bachelor’s and “manchelors” (if you don’t know what a manchelor is, your loss), and hoped it would continue all the way to February and even ordered for extra extra crates of beer and on credit no less!

I weep for Segun Odegbami in particular, who had recently in an article, excoriated the NFF and GFA for always seemingly trusting expatriates when a local in the mold of Austin Eguavoen could do the job and do it even better. Had we progressed to the quarter finals or semi-finals or even won it, Amaju Pinnick would definitely have had no choice but to hold on to the interesting excuse that Jose Peseiro had not been contracted to lead the super eagles after the Nations cup but was simply so loved by the NFF that his ticket to the tournament and hotel bills were being footed by them. (Yeah, I know, not s very creative lie but at least they try to save face and do the right thing when caught naked with their pants down unlike some others in go*coughs*)

Now, one’s argument for a local coach would be shut down very easily with disdain.

Well, methinks that for a country with so much belief in karma and superstition, we seriously should not have expected a different outcome once some people had access to discuss with the players, whether in person or remotely. Success and failure is determined by strict preparation and focus and is contagious as well, so when someone not doing too well (and this is putting it extremely mildly), becomes friends with someone who is, it is either the successful one causes the unsuccessful to prosper.or vice versa. As I would always say, it is easier for a person who’s feet are firmly planted on the ground to win a tug of war with someone who’s wrapped himself using his arms and legs as a harness only, around a tall tree.

I was not interested in this Nations cup to begin with so I really didn’t take any interest when the Super Eagles won the match against the Pharaohs of Egypt but was pleasantly surprised when I got wind of the final score.

Then I got to see part of the match against the next team and saw the interesting style of play for a few minutes before I walked out from the hang out spot I was in.

I vehemently hoped the Super Eagles won’t go far in this tournament since I know that everything in Nigeria is politicised and the triumph of the eagles this year will surely find its way into the list of successes of the present administration for use as a campaign story for 2023.

Yeah! That’s how we roll in Nigeria. Lol. As the eagles beat all comers in their group, I genuinely became concerned that the God in heaven had not heard my prayers and my strong reasons for them. Alas, as soon as news started filtering out of Pinnick’s half time team talks and all that, I knew my father in heaven didn’t need to bother himself with such a minor task as the NFF was already ontop of the matter to see it come to pass! Lol.

While I was rejoicing in that news, I then heard that there was a remote conference call with Oga at the top and I immediately ensured I settled down to my celebratory staple of rice and chicken stew! It was settled! Instead of training and tactics and focus on the D-day, the eagles would surely be dreaming of the new houses and money and all other gifts they’d have been promised, whilst on the pitch.

For the others, I might be wrong but surely for Maduka Okoye, the fine boy goal keeper, this most definitely was the case as the goal he conceded was surely one he could have kept out if only he really was a goal keeper and not sports model. Lol.

All in all, have a wonderful week and remember 2023 is around the corner. Thank God, no party can claim they won Nigeria another Nations cup trophy. Sorry Eguavoen, I’m sure by now you’d have heard you might have to wait to get the match bonus money you’re entitled to just as Gernot Rohr is still waiting for the rest of the money owed him.

At least now, the NLC and Nigerians can get back to pressurising the government to reverse itself on its plan to raise money to pay debt by pretending the increase in pump price is due to the removal of a non-existent subsidy.