Home Columnist Why you should stan Leo Stan

In these days of national gloom and something akin to national hopelessness for the average Nigerian youth, Leo Stan gives hope. He is a breath of fresh air. You know why? As far as he is concerned, ideas rule the world. And he is biased in favour of your ethics rather than your ethnicity. “What can you offer?” That’s his question.

This is a new year and I believe many of you have resolutions. Well, I want you to eschew procrastination and be intentional about your goals. Year in year out, thousands of graduates are being churned out of 100s of universities with no assurance of white-collar jobs.

Many have turned to entrepreneurship to make a living. In every field there are leaders. And since entrepreneurship is becoming the only way for a lot of people to survive, there’s a need to put the spotlight on leading entrepreneurs who have made something out of nothing. Those whom people watched grow from the scratch that could serve as inspiration to the younger generation. There’s no better person than Leo Stan in that regard. He is realist who is always ready to share his success story.

There is a saying that “follow who sabi road.” I encourage every youth out there who is trying to carve a niche for himself in the world of entrepreneurship to stan Mr. Leo Stan Ekeh, the founder and chairman of Zinox Technologies, who is also the chairman of konga.com.

For the older generation reading this article who may not know what ‘stan’ means: it simply means the great admiration for a person. Stan is a word mostly associated with celebrities in the entertainment industry. And it was derived from American rapper, Eminem’s song, titled ‘Stan’ in 2000. It is common for a lot of youth to declare their stanship for a celebrity, especially during the Big Brother Nigeria season. That word features a lot that period due to fans support for their favourite housemates.

While young people are doing well in the entertainment industry and have been able to take our music beyond the shores of Africa, tech is also another industry in Nigeria peopled by the youth. Nigeria is being watched as the next growth market due to its population. There are many young tech enthusiasts with brilliant ideas who are burning with the zeal to make a difference in society, but lack the structure and support. That is why I am introducing you all to Leo Stan.

He is an indefatigable tech enthusiast who has left no stone unturned in his quest to see that Nigeria, the world’s most populous black nation is a big player in this revolution that is sweeping across the world.

His employment and support is based on merit rather than tribal consideration. As a professional who wants to succeed in business, you have to employ people based on what they have to offer and implore them to perform to their optimum level. This is one of the ingredients of success as far as Leo Stan is concerned. His employees epitomize diversity. Not deliberately, but by his sheer knack for selecting people based on competence.

Leo Stan is receptive towards innovation. People send him emails and he reads and replies when necessary. Some who say they have something new to offer knock at the doors of Zinox Technologies and his employees who have been given the orientation right from the onset that the door is wide open for innovation, ensure that the “oga at the top” himself is aware.

Zinox is a place where young men and women are given room to be themselves as far as ideas are concerned. Tech is the future and the youth are the drivers. Leo Stan is well aware of this.

Those who have worked closely with him talk about his penchant for success. They say his watchword is hard work. There is hardly anyone who has worked with him that doesn’t carry along what he imbibed at Zinox. He leaves and indelible impression on all his staff. Till date, they talk about him.

Not many have the privilege of interacting with a boss who is a billionaire with a wealth of knowledge and experience of doing business. This is a privilege staff at Zinox enjoy. 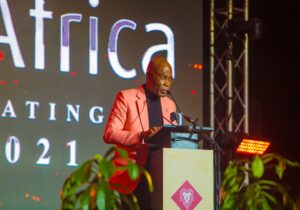 I have watched videos of several of his lectures and I must say that those who work for the business mogul are lucky to receive pep talks from him for free. At my leisure time, watching him on YouTube is part of my to-do list.

Below is an excerpt from one of such videos of Mr. Leo Stan Ekeh:

“Raising money has become a lifestyle. The failure rate with startups in Nigeria is becoming an embarrassment. People now think you just raise money, live your life and continue to raise money. I see young entrepreneurs trying to live big. I see them trying to show off. You must have an incubation period. Successful entrepreneurs are seen to be stingy because they know the value of every dollar spent. But they use the same money to sustain the society. I see a Nigerian entrepreneur who just started and has expensive cars. Entrepreneur startups shouldn’t drive the best cars. You hide until you emerge. I see young entrepreneurs living in highbrow areas because they want to show off. And I see a lot of young entrepreneurs who manage to raise money flying first class to Britain. The difference between economy class and first class, a lot of you don’t make it as profit. You see them at five star lounges around 5pm drinking champagne because they raised money from somebody. And the Herbert Wigwe’s are watching. If I am an investor and I see your lifestyle it may discourage me from investing in your business.

In the video, the living legend stated further that “The greatest wealth is your capital; your own money. You must suspend luxury in the short run. Take some pains before pleasure.”

It is one thing for a boss of an organization to be good at what he does and it is another thing for those who work for him to carry out his instruction or share in his vision to the latter. You have to be a good leader for that to happen. And Leo Stan epitomizes what it means to be a good leader.

Ekeh was born in Ubomiri Mbaitolu, Imo State to a middle-class family with three brothers and two sisters. His mother was a dietitian, and his father was a nurse.

He attended Holy Ghost College, Owerri for his secondary education. During his early years, he wanted to own the biggest transport company in Nigeria.

He later went to India for his university education, where he received a Bachelor of Science degree in economics from Punjab University. Ekeh believes that studying in India was “a great turning point in my life because I found the economy of India a realistic economy. He also earned an MSc in Risk Management from the University of Nottingham.

He started Zinox Technologies Limited in 2001 to manufacture computers. He ensured that at launch, Zinox Computers already had the WHQL certification, the first in sub-Saharan Africa, consolidated 5 years later with the attainment of the NIS ISO 2000;0991 QMS Certification.

Long before he started Zinox, he brought digital technology to publishing in Nigeria. He automated all the book and newspaper publishing houses in the country with his first company, Task Systems. He brought the likes of Lenovo and HP to Nigeria. Leo Stan is also a global adviser to Bill Gates’ Microsoft.

In October 2013, the company announced the production of its computer tablet line named Zpad. In February 2019, In his quest to expand his business, Ekeh acquired e-commerce giant, konga.com from its owners, buying 99% of the total company shares.