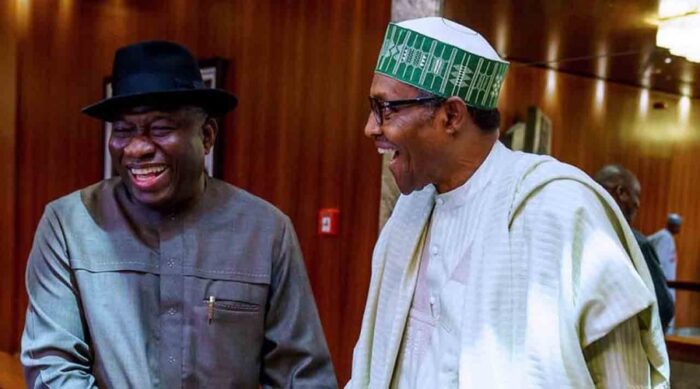 There are several reports claiming that former President, Goodluck Ebele Azikiwe Jonathan is President Muhammadu Buhari’s candidate for 2023 presidential election. In fact, what has further added spark to these claims is Buhari’s recent interview with Channels TV when he was asked about his preferred candidate and  answered “No, I wouldn’t, because he may be eliminated if I mention. I better keep it secret,”

One reason many reports are giving for this is that Jonathan has been enjoying support from Buhari as a result of handing over to the latter peacefully in 2015. Jonathan, despite pressure from some of his kinsmen and cabinet members not to concede defeat, congratulated Buhari before the election result was annouced. Today, he travels around the world as a good ambassador of Nigeria. Another reason some are giving is that Jonathan constitutionally can serve only one term and afterwards, power would return to the North.

A top member of the APC who doesn’t want his name mentioned told the Columnist Ng that “Jonathan is the only one that has the clout to defeat Atiku Abubakar. His support base in the South East and South South is intact and he is trusted in the North. If they (APC) give the ticket to any other southerner, it is going to be very easy for someone like Atiku to win.”

By next year, Buhari who is from the North West would have governed for eight years which is the constitutional limit. Many Nigerians, especially supporters of the All Progressives Congress, APC, are of the view that power should go to the South. But when they talk about the South, they mean the South West,

It was an unwritten agreement from the onset that after Buhari, a Yoruba man should takeover. But where does this leave the South East and South South?

Having a Yoruba president and a vice president from the North is going to be similar to what we have today (Buhari and Osinbajo).

Members of the People’s Democratic Party on the other hand are looking towards North for their presidential candidate. And this time around it is the North East that it favours because no one from that region has been elected as president or VP since the return to democracy in 1999.

As for running mate, they are shopping for a candidate from the South East. Many neutral political analysts are of the view that the choice of the PDP is actually fair and would balance diversity.

Now APC stalwarts, The Columnist Ng gathered, are also trying to match that by fielding Jonathan who still has a cult following in the South as presidential candidate and Governor Babagana Zulum of Borno State who has an unblemished track record as running mate. Zulum is from the North East. This is would also balance diversity.

However, there is a problem. How do the APC men sell Jonathan who they rubbished in the past by calling him all sorts of names?

Are they ready to go back to their vomit? How would Nigerians react? Are all of Jonathan’s ardent supporters going to follow him to the APC? Is it going to affect Jonathan’s legacy?

Would the Yorubas in the APC support Jonathan? It is going to be very difficult. His choice may further tear the party apart.

Well, time is the father of truth. Time will surely tell.