Home Columnist The good thing about the NDA breach 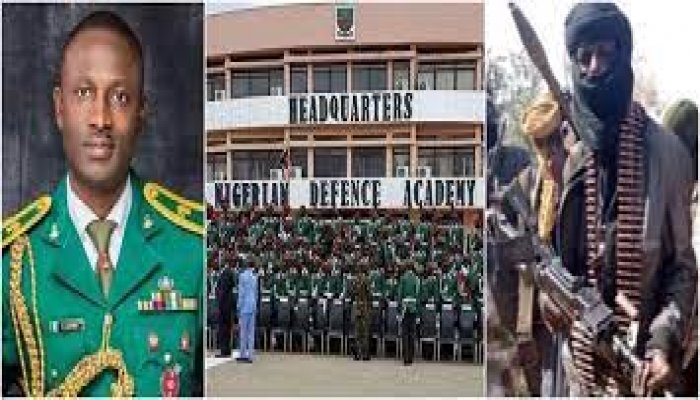 On Tuesday, the foremost military school, the Nigerian Defence Academy in Kaduna, was attacked by supposed bandits. The media reported that those attackers killed two officers, abducted one, demanded a ransom of N200m for his release. Officially, he is still considered missing. Other details are still sketchy for now, but it seems that the attack occurred at midnight while people were asleep and while the CCTV cameras were left un-surveilled by officers who had probably fallen asleep too. The perpetrators reportedly made their way into the NDA premises camouflaged in military fatigues, overpowered the guards, and headed for the officers’ quarters.

It does not matter if those “bandits” were a squad, platoon, or even a mere ragtag with enough temerity to breach the place. What counts is that even with all the institutional might of the NDA, they are just as vulnerable as anyone else in the country. So far, nothing suggests that the NDA security protocols were top-notch, but they were overrun by attackers who deployed sophisticated weapons. Everything we have heard for now instead relays that the major weapon that humbled the NDA was the sheer impudence of those attackers and perhaps some insider information. If those people could successfully carry out such a brazen attack and not a single one of them apprehended while at it, they must know what passes for security procedures in Afaka barracks better than the resident officers themselves.

Perhaps, it is appropriate to express some shock that mere “bandits” would have the audacity to penetrate the fortress of the NDA. However, if you have been a Nigerian long enough, it is hard to find anything shockable anymore. Some 10 years ago, Boko Haram insurgents bombed the Nigeria Police headquarters and the UN headquarters, both in the Federal Capital Territory, Abuja. In April this year, an armed group not only attacked the state Police Command headquarters in Imo, they also branched at a correctional facility and freed around 1,800 inmates. We were here in May when armed robbers also invaded the environs of the Presidential Villa in Aso Rock. If they could get that close to the heart of the presidency, where can they not access? Anything can happen in Nigeria, which is why it was not entirely startling that even the officers in the NDA could be caught pants down. Meanwhile, in each of the cited attacks that have taken place this year, there was no record of the perpetrators being apprehended. They have waltzed in and out of those places, leaving our security agents entirely stupefied.

But what could those “bandits” have possibly wanted by breaching the NDA? What was the end goal of that attack? What could they be trying to prove? Was the planned attack a scheme to embarrass top officers or merely to prove their invincibility against the Major General Muhammadu Buhari (retd.) regime? Why abduct an officer and even demand a ransom? Is that some extravagant attempt to display triumphalism, or is there more to the episode? There is no way to access the minds of the perpetrators, but it seems to me that what they were gunning for was to make an unassailable point about the degree of the impotence of the Nigerian military officers. By first breaching the academy and killing two of their officers without the officers returning commensurate fire, they grandly exhibited the incapability of Nigerian military agents. For those attackers to even go further to demand a ransom for an abducted officer, they must be making a public show of their conquest. That was tantamount to those “bandits” placing their feet on the heads of the top brass of the military. Imagine the degree of the humiliation the military would wallow in if they had had to debate whether or not to pay up the ransom, negotiate the sum, or merely abandon their officer to his fate.

There is no gainsaying it, the attack on the NDA is shameful. Over the years, the NDA must have become lapsed into a false sense of security and subsequent complacence for them to have been so woefully compromised by mere “bandits.”

But it is a good thing that the attack happened to them. Yes, it is a sad development, no doubt, but the Nigerian political class needs this kind of event to realise that the same monsters of incompetence and administrative ineptitude to which they have been sacrificing Nigerians will eventually grow indiscriminate in the selection of its victims and consume them too. It is only a matter of time, but the insecurity that daily bedevils the average Nigerian will eventually go round both the lowly and highly-placed. The government that consistently looks away while its citizens get kidnapped in exchange for a bag of rice and mobile phones will eventually have to reckon with its own susceptibility to the same fiend. The government that shrugs while thousands of doctors are recruited out of the country will one day find itself a victim of the same administrative incompetence with which it oppresses Nigerians.

Was it not in March that some supposed bandits also breached the Federal College of Forestry Mechanisation, Afaka, located directly opposite the NDA and abducted 39 students? In that same Kaduna, incidents of “bandits’ attacks” have become commonplace and there is an ever-growing tally of abductions. Now, they have crossed the road from the federal college of forestry to breach the NDA fortress, and who knows where they will surface next? With the attack on the NDA, maybe the Nigerian political class will finally realise that they are not as protected as they imagine. Perhaps, it will finally dawn on them that some problems have to be resolved, and that they cannot steal their way out of every situation. Maybe, if more government officials realise that they themselves are not above the problems killing Nigerians, they will wake up to the imperative of generating urgent solutions.

Nigerian leaders typically allow social crises to fester because they think they are immune to the repercussions. For many years, they have escaped the problems of failing public infrastructure by jetting out of the country to access good quality services at the expense of the Nigerians whose sweat and blood pay for the privilege. From healthcare to education and even leisure, they know how to take care of themselves. They amass enough wealth and appropriate collective resources to help them escape the problems they created. Not only do they fail to solve problems, they also talk down at Nigerians while at it. They ask people to resort to self-help and that their failure to take up the responsibility the government failed at is deemed a moral failing on the part of the citizens.

Public officials have repeatedly told people to take up arms and protect themselves from the ravaging bandits. They keep urging people to defend themselves, but who can stand the people who had enough effrontery to head for the NDA? Months ago, Defence minister Bashir Salihi Magashi admonished the people imperilled by frequent attacks on their communities not to be “cowards” and prove themselves by standing up to their serial attackers. Well, now that he can see that even the NDA is vulnerable to “bandits’” assault, I hope he re-learns the true meaning of cowardice. If the NDA could be attacked and an officer abducted right under the noses of those who are supposed to run the security architecture of the country, then, who can withstand them?

Maybe, the political class will finally learn that the mediocrity they think they escape when they surround themselves with the trappings of power is unavoidable after all. They have done very little on matters of security, and instead chosen to shore up their meagre achievements with raucous propaganda. All the while, the political establishment and its co-travellers of the military-industrial complex have insisted they are gaining the upper hand in the fight against insecurity even while it worsened. Those who have raised sincere questions have either been shouted down or dismissed as unpatriotic. Maybe, they will learn that there are limits to propaganda in armed conflict situations like this one. Maybe, they will wake up and be driven by more urgency. Maybe, they will not. Maybe, the import of this shameful incident will pass them like other previous chances to reflect they have missed.