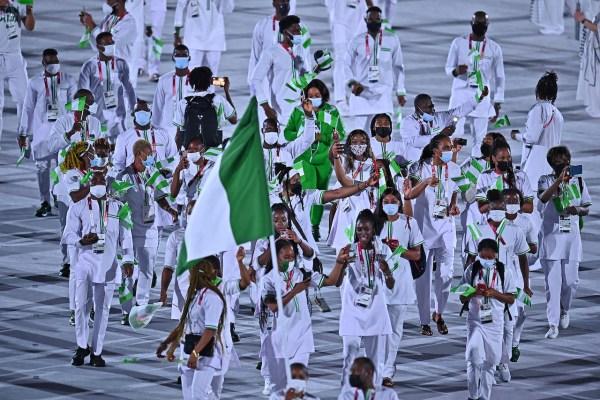 Followers of sports in Nigeria recall the 1996 Olympics in the United States with tremendous affection.  It was our finest, an event during which we won two golds and an all-time total of six.

Neither gold: one in soccer and the other in the women’s long jump, was expected.  That appears to be the source of the problem: while Nigeria expects to triumph at the Olympics every four years, she barely understands the concept of preparation.  Ours is the classic case of the lazy farmer who sleeps through the planting season only to wake up during the harvest with expectations of a full barn.

Through 60 years of Olympics participation, Nigeria has won only 23 medals, with the two-gold shock of 1996 exposing our inability to turn our considerable athletic potential into reality

Here is how 1996 has been followed by mounting futility ever since:  In 2000, President Olusegun Obasanjo, who had returned to power the previous year, ordered our Olympics-bound team to bring home five gold medals from the Sydney Games.

That unfortunate campaign was championed by his Sports Minister, Damishi Sango, who did not know that a correlation exists between investment and achievement.  “I have an order from the President to you all,” he told the chairmen of national associations heading for the Games in Australia.  “Mr. President says he will not accept anything less than five gold medals from Sydney.”

It was no surprise that Team Nigeria 2000 won no gold, although we eventually received one when the USA team was punished because a member of its 4X400 team had used a banned substance.

Nonetheless, Nigerian authorities again descended into recriminations, pledging that the 2004 Centennial Games in Athens would be different, with our athletes prepared and trained.

[Side note: It is always funny to me when Nigerian governments try to define four years, whether in terms of their tenure in office, or of the distance between Olympics.  They always seem to mistake four years for 20].

For 2004, Obasanjo did not order his five balls of akara from Iya Akara; it was the Federal Ministry of Sports, through Director Patrick Ekeji who in December 2003 raised the nation’s hopes by projecting several gold medals coming our way. He expressed the hope during a seminar.

Regrettably, in 2004, Team Nigeria returned from the Olympics in Athens with just two bronze medals.

Oh, Nigeria did see glory during the Games: our former champion, Francis Obikwelu, won the silver medal in the prestigious 100 metres men’s sprint!

But Mr. Obikwelu had finally given up on Nigeria, and his glorious triumph was for Portugal, his adopted nation.  The irony is that few Nigerians believed that had he remained a Nigerian he would have been allowed to reach his full potential.

In fact, Nigerian athletes had at that point begun to drift to other countries.  As we approached the 2008 Games in Beijing, such track champions as Josephine Onyia and Glory Alozie had taken up Spanish nationality and were thriving for that nation.

On then, to 2008: The prospects for Beijing were so grim that the Minister for Sports requested President Umaru Yar’Adua to consider withdrawing Team Nigeria from participation.   Despite all of the talk since the Atlanta Games in 1996, 20 years earlier, we had found medals must be earned, not merely wished, at the Olympics.   That year, Nigeria somehow returned with four medals, three of them bronze.

That set the stage for 2012 in London, during which the government again promised Nigeria’s return to athletic respectability.

But we should perhaps have engaged in less self-deception: As the world prepared for London, a study in the United States by 24/7 Wall Street, and published by the Tuck School of Business at Dartmouth, predicted Nigeria’s futility.

The report used a model which had predicted the medal count in the 2008 Olympics in China with 95% accuracy.  It posited, among others, that the number of medals a country wins supports the probability that it will win medals in subsequent Olympics.

That study identified the 10 countries that would win the most medals in London, drawing a correlation between population and performance.  “The larger the population a country has, the more chance it will have an athlete with the extraordinary natural ability necessary to become an Olympic champion,” it concluded.

And of the top 10 countries that were predicted to win the most medals, seven were among the world’s 10 most populous. “The exceptions are Pakistan, Nigeria and Bangladesh,” it said.

The prediction about Nigeria was perfect: we again managed to translate our potential into nothing.

When we returned from London empty-handed, the pressure was back on.  The Minister of Sports sought peace by pledging that Nigeria would win at least five gold medals in Rio.  He told the nation President Goodluck Jonathan had ordered the overhaul of the Sports Ministry, towards snagging those five gold medals.

In preparation, Mr. Abdullahi said in October 2012 Team Nigeria would spend N7bn to train her athletes.

A few things have changed in the past few years, but the same general bragging was in evidence last January when the current Sports Minister, Solomon Dalung, swore that Nigeria would do better in Rio than she did in London.

Technically, that means just one medal, any medal.  But the President of the Nigeria Olympics Committee (NOC), Sani Ndanusa, spoke of “proof” Nigeria would win several medals; and in December 2015, Tunde Popoola, the Secretary General, said Nigeria would “win many gold medals.”

Will Team Nigeria bring gold home in three weeks?  The mentality of the Sports Ministry has not changed one iota, and so hollow have the words of the government been that in the past couple of months, some Nigerian athletes have been issuing crowdfunding appeals on the Internet.

The Nigerian athlete continues to toil in the midst of mind-boggling official incompetence, indolence and blackmail.  Nigeria does not respect merit, whether it is of the athletic or intellectual variety, and Nigerian officials do not understand that they exist because of the athletes.

Until this mentality changes, the Nigerian athlete who thrives will remain the one whose talent flowers by luck, or by default.  While our officials and our institutions are all good with words and in public, few have the public good in mind.

Remember Andrew?  In 1984 when the government of one General Muhammadu Buhari launched its ‘War Against Indiscipline,’ Andrew was the television character with a Brooklyn accent who told Nigerians he was “checking out” of the country, lamenting the dearth of water, electricity, and jobs.

We wrestled Andrew to death, telling him Nigeria was his country.  Thirty-two years later, sadly, even Andrew’s kids cannot obtain water, electricity or jobs, or support for their athletic talents to enable them flourish in Rio.

Andrew—or Obikwelu—who “checked out,” does not face the same odds of equipment, organisation, training and funds of his Nigerian rival.  It is with this in mind that I salute the Nigerian athlete who bravely takes on the world as the 2016 Olympic Games begin in Brazil on Saturday.  You are a lion and a treasure, and I salute you.