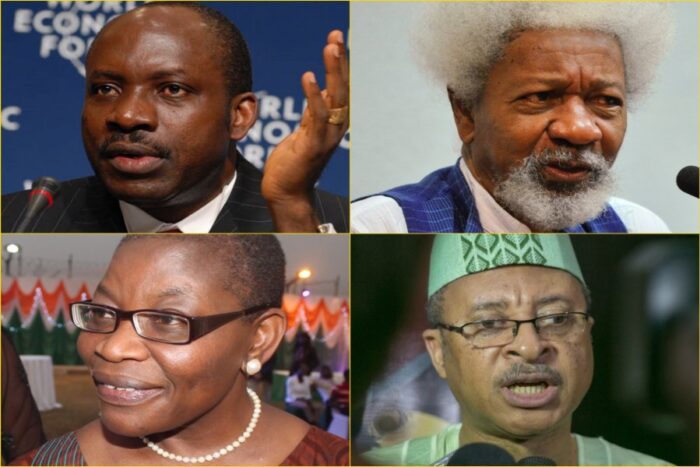 Apparently, there is no stopping  the unbridled distortion of our recent political history even by otherwise respected  intellectuals to advance their pet project, the remaking of Nigeria via the mechanism of re-structuring the polity.

Just as well,  many of us who cannot stomach the lies  have also not stopped being amazed by the length these pro- restructuring juggernauts have had  to go to  falsify history. It does not matter even if some of them proudly  participated in the making of that history.

In furtherance of their re-structuring argument, for example, they  have always insisted that the country, as it stands today, cannot make any progress because of the military imposed constitution.  They cannot be persuaded that there is really no constitution in modern Nigeria that was crafted and imposed by the military – at least not the 1979 constitution  which gave rise to the most maligned 1999 constitution.

In September 2017, I wrote a piece drawing the attention of the critics of the 1999 constitution to the memorable journalistic intervention of Simon Kolawole who had traced the making of the modern Nigerian constitution from 1976 through to the current period to show that there is no military intervention in the much-maligned constitution.  But all that will not make any dent.

And the pity of it is that there is apparently  nothing you can do to persuade those with thick political blinkers to see the folly of their cause and the brittleness of the ground on which they stand. But for  the sake of exposing the myth of the khaki men’s constitution, we are not giving up in efforts to confront  the lies clothed in mendacious intellectualism with the truth and nothing  but the  historically, if not empirically, verifiable truth.

I am not defending the military regimes, not because I am unmindful of the tumultuous contributions they made to the political, economic and social developments of the country since their ill-advised intervention  on  January 15, 1966. But that is entirely another matter. But the military regimes, one must admit, had an obligation while sitting and presiding over the affairs of the country as the de facto government of the time, to fashion out  the political and administrative programme they deemed fit for the country. And that includes having an interest in the evolving law.

Like the colonial masters of yore, they had the absolute right, akin to that of  an unelected king, to make rules and abrogate rules as it caught their fancy. Political historians would tell you that Lord Lugard’s amalgamation of the  protectorates of Northern and  Southern Nigeria in 1914, for example, was not necessarily in the interest of the country, but for their own administrative and economic convenience; not to unify the North and the South politically and fuse them together as an indivisible entity but merely to  make governance less expensive and cost effective. You may wish to conclude, therefore, that  it was the product of almost 14 years of a cost-benefit analysis – bearing in mind the admonition not to bite more than you can chew.

Until 1946 when the  Richards Constitution was introduced to fashion out a central legislative forum, there was no form of political interaction  between the North and the South.   The  major feature of that constitution was the introduction of a unitary system of administration  over the newly created three regions – the North, the East and the West.  The protests that greeted this abject imposition gave rise to the  John MacPherson Constitution of 1951 which, among others, gave more autonomy to the three regions and formed the basis of the country’s federal structure.

With some tweaking and panel beating of the colonial constitution, Nigeria lumbered  through to an independent sovereign status with the attainment of independence in 1960. With the departure of the colonial masters, the ball was now squarely in the court of the local players. Whatever hiccups that developed later on  had nothing to do with the system of government or the constitution bequeathed to them  but more to do with their character and capacity for horse trading and compromise.

The 1963 constitution, which was the  product of a series of amendments to the 1960 constitution, transformed  Nigeria into a Federal Republic with the creation of one more region – the  Mid-Western Region. None of these constitutions was entirely the product of we, the people.

But back to the beginning. It has become fanciful politically to falsify history and take undue refuge in egregious fallacies  any time the issue of  re-structuring is brought to the front burner in the discussion of  Nigerian question. I have had problems with some of the  promoters of re-structuring, not because I am opposed to change, but because I find it difficult to keep the company of falsehood which they sometimes freely peddle without any qualms.

Nigeria wants Federalism and Regionalism. Right? That is part of the demands of the pro-lobby. But instead of staying on course and pursue the project with principle and respect, they go out of their way to lie against other people, especially those from the northern part of the country who they insist are opposed to regionalism and even federalism. Until the military coup of 1966 which brought General Thomas Aguiyi Ironsi to power as Head of State and Supreme Commander, Nigeria was a Federation of four regions: North, West, East and Mid-West. But in his desire to “promote Nigerian unity” the new ruler in March 1966 set up a Constitutional Review Study Group under Chief Rotimi Williams. He set up another Commission for Unification of Regional Civil Service as well as the Judicial Service of the Federation. The sole commissioner was  Francis Nwokedi, permanent secretary, federal ministry of foreign affairs. His pet idea, based on his military experience of central command structure, was a unified service for effective control. Without any clear evidence, he said rather blandly: “ I am convinced that the bulk of our people want a united Nigeria and that they want in future one government and not a multitude of governments.” Ali Akilu was later included in the  Nwokedi commission. But working almost single-handedly,  Mr Nwokedi settled for a unitary system of government with unified services. In a broadcast on March 24, 1966, Ironsi, with military fiat, announced that Nigeria was no longer a Federal Republic. With Decree 34 in the kitty, he justified his action by  saying that “ a rigid adherence to regionalism was the bane of the last regime and one of the main factors which contributed to its downfall.” Those who want a return to regionalism today, had hailed Ironsi then because the North, as a region, was too big and too domineering for their liking. The subsequent 12-state structure of General Yakubu Gowon who replaced Ironsi in August 1966 only consolidated the centrality of governance. It did nothing to enhance state autonomy.

The National Assembly is currently  working on amendments to the constitution. This is in line with the practice in almost all democracies that we know, including the United Kingdom that has an unwritten constitution. But those who want a fresh beginning are not likely to give kudos to the National Assembly for the efforts of the lawmakers. They don’t want amendments; they want a brand new constitution from letter A to Z because, according to them, this constitution was written and imposed by the military. But I know that no modern Nigerian constitution has ever been solely and singularly written by men in khaki uniform  and I know that no constitution even in  the best of democracies is absolutely perfect. To lend more weight to this line of argument, I choose to let an eminent scholar and a sound  witness to truth speak because he was involved.

He is Dr Uma Eleazu, an elder statesman who has just turned 91.In an interview with the Niche magazine, Dr Eleazu recalled his encounter with Head of State, General Murtala Muhammadu, in 1976, two weeks before he was killed. He also recalled his service on the Constitution Drafting Committee set up by his successor, General Olusegun Obasanjo.

Dr Eleazu  later served  in the Constituent Assembly that mid-wived  the 1979 Constitution. He admitted  that he  “literally wrote the section on the Executive in the 1979 Constitution except the bit under the Directive Principles of State Policy which Professor Ben Nwabueze wrote almost single handedly.”

The 1979 constitution has mutated through the 1989 Constitution based on Professor Cookey Political Bureau and was finally translated into the 1999 Constitution which ushered in the Fourth Republic. To re-echo President Bill Clinton, I submit that  there is nothing wrong with this constitution that cannot be corrected or amended by what is right with the constitution.