Home Columnist How stylish Mancini brought sophistication back to the Azzurri 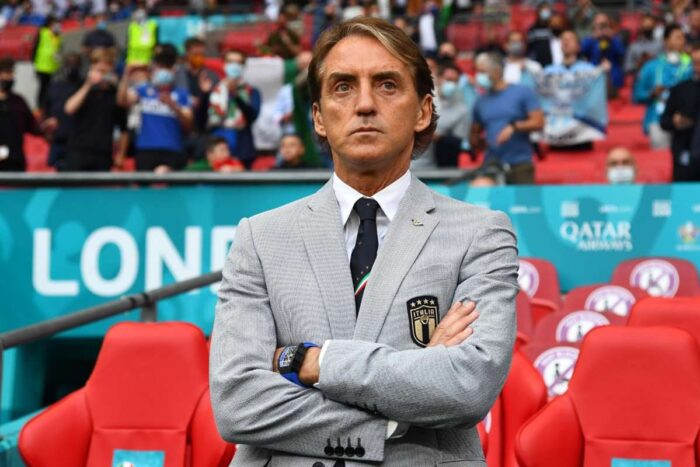 The former Manchester City manager has picked up a nation after World Cup qualifying despair and turned the national team into the stars of Euro 2020.

Italy suffered one of the biggest humiliations in their football history when they missed out on the 2018 World Cup. It was the first time they had failed to qualify for the tournament in 60 years.

Three years on, however, and they have lit up this European Championship with a breathless brand of entertaining, high-energy football.

Roberto Mancini has overseen an impressive renaissance; he has changed the style and direction of the Azzurri and could be about to deliver a first major trophy in 15 years.

The failed World Cup qualifiers were a brutal low point for the national team. An outdated style of play under Gian Piero Ventura was heavily criticised and it cost them dearly.

In stepped Mancini, instantly changing the team’s mentality, instructing his side to go after the opposition and force them onto the back foot.

With the experienced and unflappable duo of Leonardo Bonucci and Giorgio Chiellini at the heart of defence, he allowed the flair players to bring back some Italian style.

Attack-minded players such as Ciro Immobile, Lorenzo Insigne and Federico Chiesa have flourished under the new regime with Italy heading for a Euro 2020 semi-final against Spain unbeaten in their last 32 matches.

Belgium were deservedly dispatched in the quarter-finals in one of the most entertaining games of the tournament so far.

Mancini had belief in his players and courage in his tactics, going toe-to-toe with the No.1-ranked team in the world who boasted the goal threat of Serie A champion Romelu Lukaku and the creativity of Kevin De Bruyne.

“He is meticulous, he knows exactly what he wants to get from the players and, and obviously, the memories that I have is that he always, from a tactical point of view, always gives a real advantage to his players,” Belgium boss Roberto Martinez told Goal.

“I must admit I think what Roberto Mancini has done with Italy is an example. Whoever plays, they know exactly what they need to do.

“The team has a real identity a little bit different to what you would expect in the past of the Italians. I can’t speak highly enough of the work that Roberto Mancini has done with Italy.”

Martinez famously got the better of Mancini in the 2013 FA Cup final when his soon-to-be relegated Wigan side stunned Manchester City at Wembley.

By then, the Italian had already shown his coaching qualities at City. He changed the mentality of a club which had talented players but was in need of someone to mould it together and turn them into winners.

Mancini ended City’s 35-year wait for a trophy by winning the FA Cup in 2011 and the following season won the Premier League. City were fearless in the title run-in, winning their final six matches in one of the most dramatic endings ever with Mancini leading the charge from the front.

Sir Alex Ferguson had faced and seen off 15 City managers in his time as Manchester United but Mancini was the first to stand up to the Premier League legend.

With three games remaining, United came to the Etihad. When Ferguson tried to remonstrate with the officials he was put in his place by Mancini, who told him to sit down, much to the delight of the home fans.

The former playmaker had already enjoyed success as coach in Serie A with Inter but took his approach to another level in England. He got the very best from a talented squad that included Yaya Toure, David Silva, Sergio Aguero and Vincent Kompany.

That said, there were many that were glad to see the back of him because of his hard-line mentality. It meant there was often a tense atmosphere around the club’s old Carrington training ground.

Located on the outskirts of Manchester, it had a public footpath that ran alongside the pitches and photographers would often turn up to catch spats between the coach and his players.

There were rows with Carlos Tevez, Mario Balotelli and others, but he left a lasting impression on the more successful members of the squad.

“What an incredible manager, leading Italy to one of the winning contenders of Euro 2020,” Toure tweeted after Italy’s victory over Belgium. “Mancini, what a man, what a coach!”

Despite an impressive coaching pedigree with Inter and City, there is also a feeling that Mancini needed Italy as much as they needed him when the Italian Football Federation [FIGC] came knocking in 2018.

His coaching career was drifting after underwhelming short spells at Galatasaray, Inter again, and Zenit St Petersburg before the national team.

Taking charge of Italy seemed like a natural role for Mancini even if his own international career wasn’t as successful as it should have been.

Winning just 34 caps and scoring only four times, he helped Italy to the semi-finals of Euro 88 but was a non-playing member of the squad at the 1990 World Cup. His bitter memories of that experience was one reason why he gave second-choice goalkeeper Salvatore Sirigu a late run-out in the final group game against Wales.

From their rousing renditions of national anthem Il Canto degli Italiani, to defenders celebrating goal-line clearances and through to the post-match huddle, there is an energy and closeness running through Mancini’s squad.

The tournament-ending injury suffered by Leonardo Spinazzola means his team will miss his rampaging runs from the back, but it showed the unity in the squad when he returned to the training base on crutches to be embraced by his team-mates. They had already chanted his name on the flight back from Munich to Rome following the win over Belgium.

A return to Wembley for the semi-final against Spain will bring back mixed memories too for Mancini. As well as the FA Cup final wins and losses with City, he was also part of the Sampdoria side that lost the European Cup final to Barcelona, along with his assistant Gianluca Vialli.

Two more matches would validate all his hard work with a trophy but the transformation of the Azzurri has already been achieved.

Italians have fallen back in love with their national team and Mancini, who always looks devilishly suave, is deservedly back in vogue.