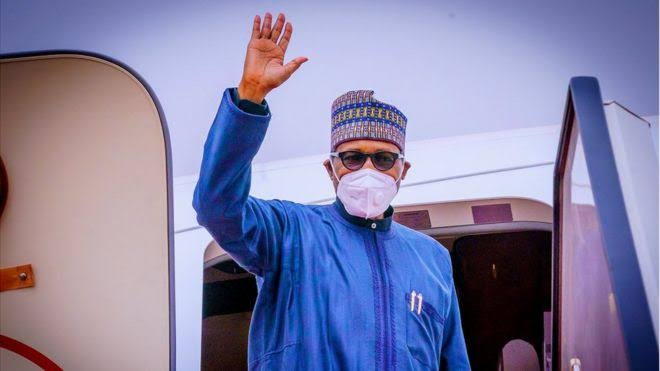 As last week closed, Nigeria ruler Muhammadu Buhari was on the verge of returning to the United Kingdom for “medical care.” He was to have departed for London on Friday, but the trip was postponed.

Several times in the past, I was critical of the twin insult of Buhari’s embarrassing resort to foreign medical facilities and reluctance to establish similar ones in Nigeria.

I have changed my mind: General Buhari should rule Nigeria from London, and I tell the following tale with my tongue firmly in my cheek.

Nigeria is not an easy country to govern. In Aso Rock, Buhari must combat hand-to-hand combat with insecurity and corruption. Nobody knows the troubles the man has seen: how traumatic it is to convene daily meetings with security chiefs, entertain them and watch them play ludo or snakes-and-ladders for hours so that people will know that they are really capable and busy.

So, what is a president to do? He can leave them to continue with the meeting while he repairs to the comfort and quiet of the presidential quarters until they are finished so that he can come back to shake their hands or send Garba Shehu to interpret his mind.

Nigerians do not know that all these things hurt the president’s health. They never show any concern. They forget that he is not the cause of such problems as insecurity or corruption, or that he is not the one who failed to develop infrastructure.

But in London, this is not the case. Nobody will be trying to shove those infernal maps and videos and statistics and graphs and pictures into Buhari’s face. Nobody will be telling him of new abductions or shootings or killer herders. Nobody will be reminding him of what he said on the campaign trail or of promises he has failed to fulfil. The president can focus on what is important: his health and rest.

How many things will the president read? How many newspapers or magazines will he read? Whoever knew there were so many newspapers, to begin with? So many stories, so many articles! Well, in London he does not have to touch a single sheet of paper. He does not have to look at a single newspaper let alone an entire collection. In London, there is no Desert Herald. No Thisday. Not that one they call The Nation. No Daily Trust. And certainly not The PUNCH, which has devalued his title of president.

Nigerians do not know that some of these people even bring free books to the president, sometimes marking out sections and chapters. “Read this, Mr. President!” “Read this chapter sir!” “This is a wonderful idea here sir!” “This can help us sir!” Some people even want him to read entire books! Whole books, imagine!! Do they know that he is the president? How can he, an admitted slow reader, start a book at his age, let alone complete it? If he reads to the end, how will he remember the beginning?

And he must hold a cabinet meeting every week! Why did the framers of the constitution insert such regularity into the constitution? And each one of those bloody civilians wants to be listened to. Every week…and the ministers are always coming with bulky files and proposals.

In Aso Rock, Buhari is always reminded of all those small boys and girls who call themselves #ENDSARS, the ones who wanted to drive him out of the presidency, as he said on TV recently, but were instead driven into hiding and jail or homelessness or locked out of their bank accounts.

In London, walahi, Buhari does not have to worry about #EndSARS. There are no #EndSARS rascals. #EndSARS is not an issue. Buhari terminated #EndSARS with SWAT, his Special Weapons And Tactics squad. In London, it is peaceful. There are no cows using their fictional grazing routes in the streets of the federal capital to remind people to come and bother the president.

This is why London is the best place for Buhari to govern Nigeria. He can fly in whenever he wishes. There are no state governors waiting outside his door. There are no party officials requesting help. There are no parents camped outside the presidential villa complaining their children have been kidnapped by the hundreds.

Instead, there are smiling white doctors and nurses waiting for him, unlike the Nigerian doctors at home who have bad hospitals, if they have hospitals at all.

And that is the other thing in London: everybody is ready. The ambassador is ready. His wife is ready. The Consul-General is ready. Nobody tells you he is late because of traffic. The roads are clean; why can’t the roads in Abuja be clean like that?

And the doctors think about everything. They do not bring you books to read. They have the latest equipment, and they treat you very well. Why can’t Abuja be like that? And unlike Nigeria, they do not have power failure.

And something else: the treatment is free. Yes, they know the president of Nigeria is a man of integrity and the African anti-corruption champion and a humble man, so they do not charge him for their treatment.

They know that as a man of honour, Buhari does not like to squander his people’s money on his expensive private treatment. They understand that if he does, he would be expected,as Africa’s anti-corruption champion,to proudly account for every penny spent because champions lead by example, not by words.

This is why the London doctors give him free treatment, setting Buhari free to eat all the fish and chips he desires and to spend his time in front of his television. The doctors are sympathetic that were Buhari to be paying for his medical visits, it would be the most public example of how spectacularly a leader might betray his people for him never to account. After all, when the African Union named him their champion in 2018, they said it was a recognition of his efforts to end graft in Nigeria.

Lately, Buhari has increasingly called for sympathy, saying that Nigerians should be less critical of his government.

On that point, he is wrong: it is his conscience, not his countrymen, that he should be worried about. If his conscience does not bother him when he takes advantage of foreign hospitals and the commonwealth simply because he can, he must remember that he can neither write, nor hide, his own story.

Privilege is not power.